Run away speed of the hydraulic turbine is corresponding to speed if:

The speed of hydraulic turbine if the runner of the turbine is allowed to run freely without any load and with the wicket gates wide opening is known as runaway speed. For a given type of turbine, Runaway speed differs due to design variations by different manufacturers. All the rotating parts in the turbine must be designed to withstand the stresses generated from the centrifugal forces at runaway speed.

The specific speed of a Francis turbine is in the range of:

1. The specific speed of Pelton wheel turbine (single jet) is in the range of 10-35

2. The specific speed of Pelton wheel turbine (multiple jet) is in the range of 35-60

4. The specific speed of Kaplan turbine is greater than 300.

The viscosity of liquid _________ with increase in temperature.

For liquids the viscosity is given by:

Where T is absolute temperature & a, b, c is experimentally determined constants. 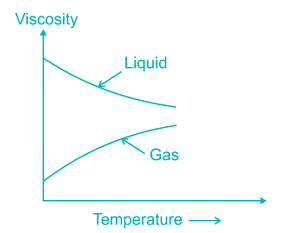 For Bernoulli’s equation to remain valid, which of the following is NOT required?

I. Flow along a stream line

II. Flow is steady and Incompressible

Which of the following causes the major loss in the long pipes?

Head loss in a pipe flow problems are divided in to two parts:

Major head loss is due to friction

Some of the minor head losses are due to sudden enlargement, at the exit of pipe, due to sudden contraction, at the entrance of the pipe, due to pipe bend. But for long pipe flow problems major loss is due to head loss due to friction which is directly proportional to length of pipe.

Which one of the following is true about ideal fluid?

Ideal fluid is Incompressible and it has zero value of shear force. Ideal fluid does not actually exist in nature, but sometimes used for fluid flow problems. An ideal fluid is a fluid that has several properties including the fact that it is :

Incompressible – the density is constant

Irrotational – the flow is smooth, no turbulence 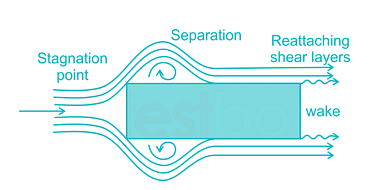 A bluff body is defined as that body whose surface does not coincide with the streamlines when placed in a flow. Then the flow is separated from the surface of the body much ahead of its trailing edge with the result of a very large wake formation. Then the drag due to pressure will be very large as compared to the drag due to friction on the body.

The most economical section of circular channel for maximum discharge is obtained when (Where, d is the diameter of circular section) 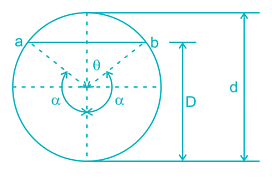 is the equation to determine kinematic viscosity of liquids by

The device used for measurement of viscosity is known as viscometer. According to Saybolt viscometer:

Fluid is a substance which offers no resistance to change of

A fluid can be defined as a substance which is capable of flowing and changing its shape according to the surrounding without offering internal resistance. Liquid offers no resistance to change of shape and it conforms to the shape of its surrounding.

In fluids, Compressibility is a measure of the relative volume change of a fluid as a response to as pressure change

ρ density of a fluid

The boundary layer is formed as the flowing fluid comes in contact with the solid surface, because of the action of:

A boundary layer is a thin layer of viscous fluid close to the solid surface of a wall in contact with a moving stream in which (within its thickness δ) the flow velocity varies from zero at the wall (where the flow “sticks” to the wall because of its viscosity) up to U∞ (free stream velocity) at the boundary. In a flow field, viscous stresses are very prominent within this layer.

An impulse turbine produces 50 kW of power when the blade mean speed is 400 m/s. What is the rate of change of momentum tangential to the rotor?

The "Cippoletti" weir is a trapezoidal weir, having 1 horizontal to 4 vertical side slopes, as shown in figure. The purpose of the slope, on the sides, is to obtain an increased discharge through the triangular portions of the weir, which, otherwise would have been decreased due to end contractions in the case of rectangular weirs.

Friction drag is generally larger than the pressure drag in _______.

A body moving through a fluid experiences a drag force, which is usually divided into two components: frictional drag, and pressure drag.

Frictional drag comes from friction between the fluid and the surfaces over which it is flowing. This friction is associated with the development of boundary layers, and it scales with Reynolds number.

Pressure drag comes from the eddying motions that are set up in the fluid by the passage of the body. This drag is associated with the formation of a wake, which can be readily seen behind a passing boat, and it is usually less sensitive to Reynolds number than the frictional drag. It depends on the shape of the body.

A hydraulic intensifier normally consists of _____.

Critical-depth meter is used to measure _____.

The critical depth is given as,

The force exerted by the jet on fixed plate shown in the figure below is equal to:

The flow nozzle is essentially a venturimeter with the divergent part omitted. Therefore the basic equations for calculation of flow rate are the same as those for a venturimeter. The dissipation of energy downstream of the throat due to flow separation is greater than that for a venturimeter. But this disadvantage is often offset by the lower cost of the nozzle. Flow nozzle(top) and venturimeter(bottom) diagram is given below. 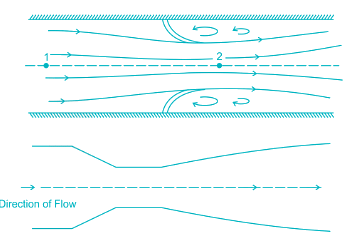