A low-loss transformer has 230 volts applied to the primary and gives 4.6 volts in the secondary. Secondary is connected to a load which draws 5 ampere of current. The current (in ampere) in the primary is

A ball of mass 0.25 kg attached to the end of a string of length 1.96 m is moving in a horizontal circle. The string will break if the tension is more than 25 N. What is the maximum speed with which the ball can be moved

Save
A straight wire of length l and electric dipole moment p is bent to form a semicircle. The new dipole moment would be
JEE Main Physics Mock Test - Question 6

Save
Two charged conducting spheres of radii a and b are connected to each other by a wire. The ratio of electric fields at the surface of two spheres is
JEE Main Physics Mock Test - Question 7

Save
Two pieces of a glass plate, placed one upon the other with a little water in between them, can not be separated easily, because of
JEE Main Physics Mock Test - Question 9

Save
A ball of mass 0.25 kg attached to the end of a string of length 1.96 m is moving in a horizontal circle. The string will break if the tension is more than 25 N. What is the maximum speed with which the ball can be moved
JEE Main Physics Mock Test - Question 10

A bullet of mass m and velocity V is fired into a block of mass M and sticks to it. The final velocity would be

If a person with a spring balance and a body hanging from it goes up and up in an aeroplane, then reading of weight of body as indicated by spring balance will

Spring balance measures the weight of the body which depends upon the value of g. The height obtained by an aeroplane will not bring significant change in g so the spring balance is to read the same

Save
In the following question, a Statement of Assertion (A) is given followed by a corresponding Reason (R) just below it. Read the Statements carefully and mark the correct answer-
Assertion(A): Refractive index of a material depends on the frequency of the light
Reason(R): Incoming e.m. wave applies an electric field and polarises it, contributing to (∈) permittivity of the medium, depending on its frequency.
JEE Main Physics Mock Test - Question 16

Save
A spherical ball rolls on a table without slipping. Then the fraction of its total energy associated with rotation is
JEE Main Physics Mock Test - Question 18

Save
A stationary point source of sound emits sound uniformly in all directions in a non-absorbing medium. Two points P and Q are at a distance of 4m and 9m respectively from the source. The ratio of amplitudes of the waves at P and Q is
JEE Main Physics Mock Test - Question 19

Save
Which of the following is a dimensionless quantity?
JEE Main Physics Mock Test - Question 20

We have two radioactive nuclei A and B. Both convert into a stable nucleus C. Nucleus A converts into Cafter emitting two αα-particles and three β-particles. Nucleus B converts into C after emitting one αα-particle and five β-particles. At time t=0, nuclei of A are 4N0 and that of B are N0. Half life of A (into the conversion of C) is 1min and that of B is 2min. Initially number of nuclei of C are zero.

'n' moles of an ideal gas undergoes a process A → B as shown in the figure. The maximum temperature of the gas during the process will be 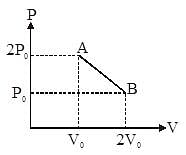 In Y.D.S.E. using light of wavelength 6000Å angular fringe width of fringe formed on the screen is 1°. Find the distance between the slits :- 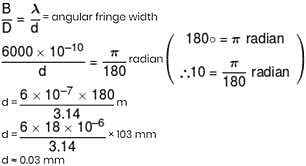 An electron moves in the field produced by a charged sphere of radius 10 cm along the radius connecting the points separated by 12 and 15 cm from the centre of the sphere. The velocity of the electron changes thereby from 2 × 105 to 2 × 106 m/s. Determine the surface charge (in nC/m2) density of the sphere. (Mass of electron = 9.1 × 10–31 kg) 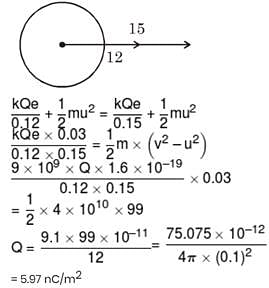 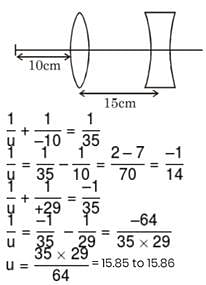 The new white belt of a long horizontal conveyor is moving with a constant speed v = 3.0 m/s. A small block of carbon is placed on the belt with zero initial velocity relative to the ground. The block will slip a bit before moving with the belt, leaving a black mark on the belt (figure). How long is that mark (in m) if the coefficient of kinetic friction between the carbon block and the belt is 0.20 and the coefficient of static friction is 0.30?