What is the minimum energy required to launch a satellite of mass m from the surface of a planet of mass M and radius R in a circular orbit at an altitude of 2R? 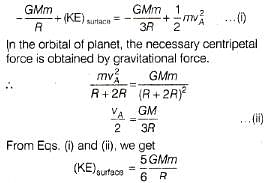 A spherically symmetric gravitational system of particles has a mass density

where r0 is a constant. A test mass can undergo circular motion under the influence of the gravitational field of particles. Its speed V as a function of distance r (0 < r < ∞) from the centre of the system is represented by 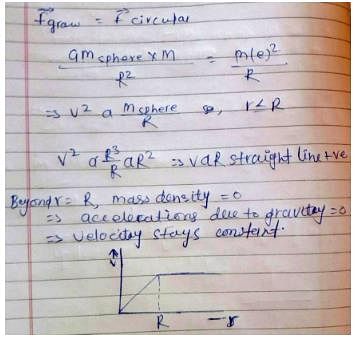 An astronaut in an orbiting space station above the Earth experiences weightlessness.

An object moving around the Earth under the influence of Earth's gravitaitonal force is in a state of `free-fall'.

The space station has an acceleration towards the Earth but it also has a velocity perpendicular to the radius which stops it from falling.

A thin uniform annular disc (see figure) of mass M has outer radius 4 R and inner radius 3R. The work required to take a unit mass from point P on its axis to infinity is

Gravitational acceleration on the surface of a planet is

A satellite is moving with a constant speed 'V' in a circular orbit about the earth. An object of mass 'm' is ejected from the satellite such that it just escapes from the gravitational pull of the earth. At the time of its ejection, the kinetic energy of the object is

Two bodies, each of mass M, are kept fixed with a separation 2L. A particle of mass m is projected from the midpoint of the line joining their centres, perpendicular to the line. The gravitational constant is G. The correct statement(s) is (are)