I. Some rods are notes.

II. Some books are tyres.

III. Some tyres are cards ​Q. ​
Statements:
Some Pencils are Chairs.
All Chairs are umbrellas.
Some umbrellas are sticks.
All sticks are caps.

I. Some caps are umbrellas.

II. Some umbrellas are sticks.

III. Some sticks are pencils. ​Q. ​​
Statements:
Some lenses are poles.
All poles are skies.
Some skies are boxes.
No box is a bottle.

I. Some bottles are lens

II. Some boxes are poles.

III. No bottle is a lens.

The venn diagram for this question will be as follow, the bottles can be placed at two places either along with the lens or away from the lens. So the option is E. ​Q. ​
​Statements:
Some seeds are flowers.
All flowers are trees.
All trees are leaves.
Some leaves are plants

I. Some plants are flowers.

II. Some leaves are seeds.

III. Some leaves are flowers.

It is clear from the venn diagram that only conclusion 2 and 3 follows. 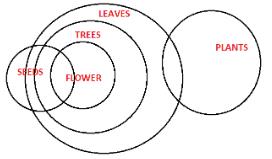 Q.
Statements:
Some pens are books.
All schools are books.
Some colleges are schools.
Conclusions:

Since the middle term 'books' is not distributed even once in the premises, so no definite conclusion follows.

Some colleges are schools. All schools are books.

Since one premise is particular, the conclusion must be particular and should not contain the middle term.

So, it follows that 'Some colleges are books'. Thus, III follows.

Since both the premises are particular, no definite conclusion can be drawn.

Q.
Statements:
All cups are bottles.
Some bottles are mugs.
No mug is a plate.
Some plates are tables.

I. Some tables are bottles.

II. Some plates are cups

III. No table is a bottle.

IV. Some mugs are cups.

The Venn diagram for the syllogism is as shown below:

The conclusions I and III are complementary in nature ie. One of the two has to be correct universally and both can't be correct at the same time. And the other conclusions are false. Hence, option (E) is the right answer.

Q.​
Statements:
All birds are horses.
All horses are tigers.
Some tigers are lions.
Some lions are donkeys.

I. Some tigers are horses.

II. Some donkeys are birds.

III. Some tigers are birds.

IV. Some donkeys are horses.

Q.​
​Statements:
Some chairs are tables.
All tables are pots.
All pots are mats.
Some mats are buses.

I. Some buses are tables.

II. Some mats are chairs.

III. No bus is tables.

IV. Some mats are tables.

For further clarification , refer to the image. I. Some shirts are Clothes

II. Some shirts are flowers.

III. Some flowers are Clothes.

IV. Some dresses are Clothes.

A is the correct option
lamps = some clothes, some flowers and some dresses.
All dresses are shirts, meaning, some lamps are shirts.

Hence, none of the conclusion is correct.

Q.​ ​​​
Statements:
Some benches are walls.
All walls are houses.
Some houses are jungles.
All jungles are windows.

I. Some windows are benches.

II. Some jungles are walls.

III. Some houses are benches.

IV. Some windows are houses.

The correct option is C.
The venn diagram for the question is follow- No cream is a lemon.

All lemons are onions.

All cream is a grapes.

(i) Some grapes are not onions.

(ii) All lemons are grapes is a possibility

Some trees are mangoes.

All mangoes are bananas.

All tomatoes are bananas.

(i) All trees are tomatoes is a possibility.

(ii) No bananas are tree is a possibility.

(i) No microphone is mechanic is a possibility.

(ii) Some microphones are not cellular. 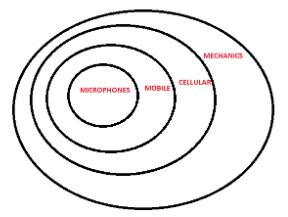 (i) Some mechanics which one mobiles are also a part of microphones.

(ii) All microphones are cellular.

The correct option is E.
It is clear from the venn diagram. (i) Some numbers are pens.

(ii) Some numbers are stickers. (i) Some erasers are numbers.

(ii) some pens are pencils.

If some numbers are erasers then vice versa will also be true because maybe all erasers are not numbers but some can be. Thus the conclusion 1 is true.
Also if all pencils are pens then maybe all pens are not pencils but some will be pencils and some will be stickers. (ii) All dusters are shoes.

It is clear from the venn diagram that both the conclusions follow. 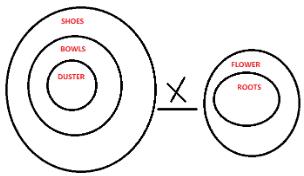 (ii) All flowers are root.

The correct option is A.
As if all roots are flowers that do not means that all flowers are roots, thus only conclusion 1 follows. 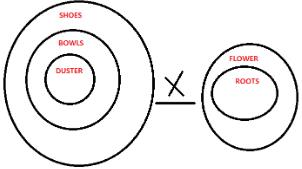 Some mails are chats.

All uploads are chats.

(i) All mails being uploads is a possibility.

All guns are parachutes.

No parachutes is helicopter.

All helicopters are airplanes.

(i) No gun is helicopter.

(ii) All guns being airplanes is a possibility.

There is no connection between guns and airplanes so conclusion 2 is wrong. Only conclusion 1 is correct