Where is the Jagriti school located

This is the true story of Jagriti School in Murshidabad (West Bengal). When its building was being made, there was a plan to make brick patterns on the floor and walls. Jamaal, Kaalu and
Piyaar were the masons for the brick work. They wanted to get new ideas for the school building. So they took their other friends to see the old tomb of Murshid Kuli Khan.
This building has a big floor with about two thousand beautiful brick patterns. These were made by masons long back – about three hundred years ago.  The masons came back excited. Jamaal said — Ah! In those days
they had made so many interesting brick patterns. We had forgotten these! Let us make some nice designs on the floor of this school. Each mason made a different brick pattern. The school is proud to have such a beautiful building! Children play and sing on it and also make new patterns themselves.

From where did Jamaal, Kaalu and Piyaar get the new idea for school building?

Jamaal, Kaalu and Piyaar got the new idea for school building from Old Tomb of Murshid Kuli Khan

Old tomb of Murshid Kuli Khan is how many years old?

Which of the following patterns are floor patterns?

All the above are floor patterns.

Which of the following pattern is circular?

In ‘J’  all the bricks are placed in a small circle to form a large circle.

In which of the following patterns, mirror halve can be seen?

Dotted line in the pattern represents the line of symmetry

Which of the following shows three faces of a brick?

Option (b) shows three faces of a brick.

How many faces in all does a brick has?

A brick has six faces- Top, Bottom and four sides.

What is the shape of all six faces in a brick?

All faces of the brick are Rectangle in shape.

Which face of the brick is the smallest?

If we see a brick from the top, its left and right-side faces are smaller as compared to the other faces.

Which of these are the faces of a brick?

All faces of the brick are rectangular in shape.

Which of these is a drawing of a brick?

All faces of the bricks are rectangular in shape.

Which design of the wall is expected to be the weakest?

Option b is expected to be the weakest because one brick is placed exactly one above the other.So the stability of the wall would be lesser than other options.

Below pattern of wall design is matching with which brick wall.

Long side and small side of the bricks are matching with option c.

How many different patterns can you see in these two photos? 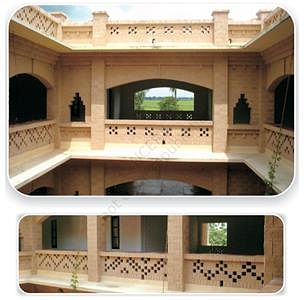 here are five types of Jaali design shown in the two pictures.

Which shape can be made by placing a brick in the garden?

We can keep the brick in the garden as shown in picture below.It makes a triangle shape.

What type of design you can see in the below picture.

An arch type design is shown in the picture.

Burnt bricks can be further classified into how many types?

There can be 4 sub-divisions of burnt bricks. They are first class, second class, third class and kiln rejected bricks.

In the picture below,how many faces of the longest brick can be seen from the top? 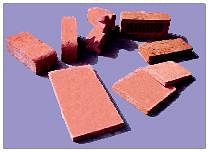 As it is the top view of the longest brick, only one face can be seen.

Which of the following is used to make a brick?

Clay and soil are used to make a brick.

If a brick length is 10 centimeters, then how many bricks need to put in a straight line to make a wall of one-meter length.

Steps followed in making bricks are collection of clay, pouring in mold, removing from mold and drying.

Which is the correct numeral representation of one hundred thousand?

One hundred thousand is equal to one lakh.