Bob bikes to school every day at a steady rate of x miles per hour. On a particular day, Bob had a flat tire exactly halfway to school. He immediately started walking to school at a steady pace of y miles per hour. He arrived at school exactly t hours after leaving his home. How many miles is it from the school to Bob's home?

Let b be the number of hours Bob spends biking. Then (t – b) is the number of hours he spends walking. Let d be the distance in miles from his home to school. Since he had the flat tire halfway to school, he biked d/2 miles and he walked d/2 miles. Now we can set up the equations using the formula rate x time = distance. Remember that we want to solve for d, the total distance from Bob's home to school.

Solving equation 1) for b gives us:

The correct answer is C.

Lexy walks 5 miles from point A to point B in one hour, then bicycles back to point A along the same route at 15 miles per hour. Ben makes the same round trip, but does so at half of Lexy’s average speed. How many minutes does Ben spend on his round trip?

Alternatively, we could use a shortcut for the last part of this problem. We know that Ben's rate is half of Lexy's average rate. This means that, for the entire trip, Ben will take twice as long as Lexy to travel the same distance. Once we determine that Lexy will take 80 minutes to complete the round trip, we can double the figure to get Ben's time. 80 × 2 = 160.

The formula to calculate distance is Distance = (Rate)(Time). So at any given moment Tom's distance (let's call it DT) can be expressed as DT  = 6T. So, at any given moment, Linda's distance (let's call it DL) can be expressed as DL = 2(T + 1) (remember, Linda's time is one hour more than Tom's). The question asks us to find the positive difference between the amount of time it takes Tom to cover half of Linda's distance and the time it takes him to cover twice her distance.  Let's find each time separately first.

A question with variables in the answer choices (VIC) can be solved by picking values for the variables.

Let's pick the following values for x, y and z:

When picking values for a VIC question, it is best to pick numbers that are easy to work with (i.e., 12 is divisible by 4 and 6 here), but that don't have any extraneous relationships between them. For example x = 4, y = 3, z = 12 would be a less favorable set of numbers because xy would equal z in that case and there is no need for the product of the two times to equal the distance. Picking variables with extraneous relationships can lead to false positives when checking the answer choices.

To evaluate how far each train travels when they move toward each other starting at opposite ends, let's set up an RTD chart.

We can set-up two equations with two unknowns and solve

Let's see which of the five answer choices give us 2.4 when we plug in our values for x, y and z: 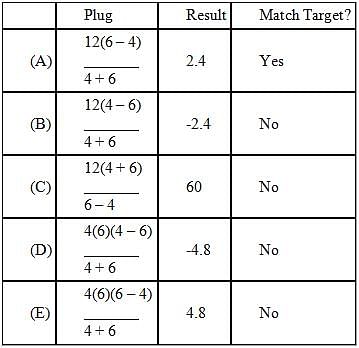 Only A matches the target.

This question can also be solved algebraically.
Since the trains traveled the z miles in x and y hours, their speeds can be represented as z/x and z/y respectively.

We can again use an RTD chart to evaluate how far each train travels when they move toward each other starting at opposite ends. Instead of using another variable d here, let's express the two distances in terms of their respective rates and times.

Since the two distances sum to the total when the two trains meet, we can set up the following equation:

The ‘moving walkway’ is a 300-foot long conveyor belt that moves continuously at 3 feet per second. When Bill steps on the walkway, a group of people that are also on the walkway stands 120 feet in front of him. He walks toward the group at a combined rate (including both walkway and foot speed) of 6 feet per second, reaches the group of people, and then remains stationary until the walkway ends. What is Bill’s average rate of movement for his trip along the moving walkway?

To determine Bill’s average rate of movement, first recall that Rate × Time = Distance. We are given that the moving walkway is 300 feet long, so we need only determine the time elapsed during Bill’s journey to determine his average rate.

This problem may also be solved with a shortcut. Consider that Bill’s journey will end when the crowd reaches the end of the walkway (as long as he catches up with the crowd before the walkway ends). When he steps on the walkway, the crowd is 180 feet from the end. The walkway travels this distance in (180 feet)/(3 feet per second) = 60 seconds, and Bill’s average rate of movement is (300 feet)/(60 seconds) = 5 feet per second.

John and Jacob set out together on bicycle traveling at 15 and 12 miles per hour, respectively. After 40
minutes, John stops to fix a flat tire. If it takes John one hour to fix the flat tire and Jacob continues to ride during this time, how many hours will it take John to catch up to Jacob assuming he resumes his ride at 15 miles per hour? (consider John's deceleration/acceleration before/after the flat to be negligible)

It is easier to break this motion up into different segments. Let's first consider the 40 minutes up until John stops to fix his flat.

It took John 1 hour to fix his tire, during which time Jacob traveled 12 miles. Since John began this 1-hour period 2 miles ahead, at the end of the period he is 12 – 2 = 10 miles behind Jacob.
The question now becomes "how long does it take John to bridge the 10-mile gap between him and Jacob, plus whatever additional distance Jacob has covered, while traveling at 15 miles per hour while Jacob is traveling at 12 miles per hour?" We can set up an rt = d chart to solve this.

If we solve these two simultaneous equations, we get:
15t = 12t + 10
3t = 10
t = 3 1/3 hours
Another way to approach this question is to note that when John begins to ride again, Jacob is 10 miles ahead. So John must make up those first 10 miles plus whatever additional distance Jacob has covered while both are riding. Since Jacob's additional distance at any given moment is 12t (measuring from the moment when John begins riding again) we can represent the distance that John has to make up as 12t + 10. We can also represent John's distance at any given moment as 15t. Therefore, 15t = 12t + 10, when John catches up to Jacob. We can solve this question as outlined above.

Deb normally drives to work in 45 minutes at an average speed of 40 miles per hour. This week, however, she plans to bike to work along a route that decreases the total distance she usually travels when driving by 20% . If Deb averages between 12 and 16 miles per hour when biking, how many minutes earlier will she need to leave in the morning in order to ensure she arrives at work at the same time as when she drives?

This standard rate problem will rely heavily on the formula RT=D, where R is the rate, T is the time and D is the distance traveled.
First, we should find the driving and biking distances:
If Deb drives for 45 minutes, or 0.75 hours, at a rate of 40mph, she drives a total distance of
(0.75)(40) = 30 miles.
If the bike route is 20% shorter than the driving route, the bike route is 30 – 30(0.2) = 30 – 6 = 24 miles.
Next, we need to determine how long it will take Deb to travel the route by bike.  She wants to ensure that she'll get to work by a particular time, so we want to calculate the longest possible time it could take her; therefore, we have to assume she will bike at the slowest end of the range of the speeds given: 12mph.  If she travels 24 miles at 12mph, it will take her 24/12 = 2 hours or 120 minutes.
If Deb normally takes 45 minutes to drive to work but could take up to 120 minutes to bike to work, then she must leave 120 – 45 = 75 minutes earlier than she normally does to ensure that she will arrive at work at the same time.
The correct answer is D.

Alex and Brenda both stand at point X. Alex begins to walk away from Brenda in a straight line at a rate of 4 miles per hour. One hour later, Brenda begins to ride a bicycle in a straight line in the opposite direction at a rate of R miles per hour. If R > 8, which of the following represents the amount of time, in terms of R, that Alex will have been walking when Brenda has covered twice as much distance as Alex?

If we want Brenda's distance to be twice as great as Alex's distance, we can set up the following equation:

This is choice C

On Monday, Lou drives his ford escort with 28-inch tires, averaging x miles per hour. On Tuesday, Lou
switches the tires on his car to 32-inch tires yet drives to work at the same average speed as on Monday. What is the percent change from Monday to Tuesday in the average number of revolutions that Lou’s tires make per second?

The key to solving this question lies in understanding the mathematical relationship that exists between the speed (s), the circumference of the tires (c) and the number of revolutions the tires make per second (r).  It makes sense that if you keep the speed of the car the same but increase the size of the tires, the number of revolutions that the new tires make per second should go down.  What, however, is the exact relationship?
Sometimes the best way to come up with a formula expressing the relationship between different variables is to analyze the labels (or units) that are associated with those variables.  Let’s use the following units for the variables in this question (even though they are slightly different in the question):
c: inches/revolution
s: inches/sec
r: revolutions/sec
The labels suggest:  (rev/sec) x (inches/rev) = (inches/sec), which means that rc = s.
When the speed is held constant, as it is in this question, the relationship rc = s becomes rc = k.  r and c are inversely proportional to one another.  When two variables are inversely proportional, it means that whatever factor you multiply one of the variables by, the other one changes by the inverse of that factor.  For example if you keep the speed constant and you double the circumference of the tires, the rev/sec will be halved.  In this way the product of c and r is kept constant.
In this question the circumferences of the tires are given in inches, the speed in miles per hour, and the rotational speed in revolutions per second.  However, the discrepancies here don’t affect the fundamental mathematical relationship of inverse proportionality: if the speed is kept constant, the rev/sec of the tires will change in an inverse manner to the circumference of the tires.
Let’s assign     c1 = initial circumference; c2 = new circumference
r1 = initial rev/sec ; r2 = new rev/sec
Since the speeds are held constant:
c1r1 = c2r2
r2 = (c1/c2)r1
r2 = (28/32)r1
r2 = (7/8)r1

If the new rev/sec is 7/8 of the previous rev/sec, this represents a 1/8 or 12.5% decrease and the correct answer is (B).  Relationships of inverse proportionality are important in any word problem on the GMAT involving a formula in the form of xy = z and in which z is held constant.