Compounds having the same molecular formula but different structures are classified as:

Structural Isomers are compounds with the same molecular formula but the different spatial arrangement of atoms in the molecule i.e. they have the same numbers of atoms of the same element but their atoms are arranged differently. 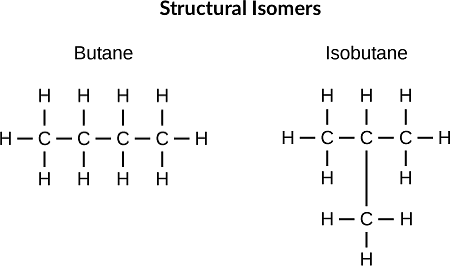 Position isomerism is a part of:

Position isomerism is a part of structural isomerism.

(i) Chain Isomerism: Chain isomerism occurs when there is a difference in the atomic arrangement of the carbon to the carbon chain of a molecule. If two or more compounds have the same type of molecular formula with different main chains, then they are said to exhibit the property of Chain isomerism. This phenomenon is also called skeletal isomerism. An example is a compound with the molecular formula C5H12, of which there are three isomers: n-pentane, 2-methyl butane or isopentane and 2,2-dimethylpropane or neopentane.
(ii) Position Isomerism: Positional isomerism arises when there is a difference in the positions occupied by the substituent atoms or a group of atoms or due to the unsaturation occurring in the chain. When the position of the functional groups with respect to the main chain atom changes, the phenomenon is called position isomerism.  An example is a compound with molecular formula C6H4Br2, of which there are three isomers: 1,2-dibromobenzene, 1,3-dibromobenzene and 1,4-dibromobenzene.
(iii) Functional Group Isomerism: Functional group isomerism occurs when there is a  presence of the odd form of functional groups with the same chemical formula. When some compound has two different structures but the same chemical formula, then it is said to exhibit functional isomerism. An example is the compound with molecular formula C2H6O, of which there are two isomers: dimethyl ether and ethanol or ethyl alcohol, that have different functional groups, an ether group, –O–, and a hydroxyl group, –OH, respectively.

The number of isomers possible for a disubstituted benzene are:

The number of isomers possible for disubstituted benzene is 3.

Pentane, isopentane and neopentane are a type of:

Isomers are molecules that have the same molecular formula but have a different arrangement of atoms.

Hence they are chain isomers of each other.

Geometrical and Optical isomerism are types of:

Two molecules are described as stereoisomers if they are made of the same atoms connected in the same sequence, but the atoms are positioned differently in space.
Additional Information: Stereoisomers can be subdivided into:
(i) Optical isomers: Optical isomers are those two compounds with the same chemical formula such that their mirror images are not superimposable on each other. Depending on the direction they rotate the plane of polarised light in a polarimeter, we have two forms of optical isomers. They are:

An example is butan-2-ol. It has four different groups attached to its second carbon atom.

(ii) Geometric isomers: In the case of disubstituted complexes, the substituted groups could either be adjacent or opposite to each other. This leads to geometric isomerism. Thus, we can prepare square planar complexes such as [Pt(NH3)4Cl2]  in two forms, cis and trans. When the chlorine atoms are adjacent to each other, we get the cis form. When two chlorine atoms are opposite, we get the trans-form.

Which among the following defines Meso forms of isomers?

Meso forms of isomers are single compounds and their molecules are achiral hence they cannot be separated into pairs.

Additional Information: A meso compound or meso isomer is a non-optically active member of a set of stereoisomers, at least two of which are optically active. This means that despite containing two or more stereogenic centers, the molecule is not chiral.

C3H6O represents an aldehyde and a ketone, is a type of:

The aldehyde and ketone that can be represented by molecular formula C3​H6​O are propanal and propanone respectively.

These two carbon compounds are called functional isomers. They do not have the same physical properties since their functional group is different.

The phenomenon of existence of two or more compounds possessing the same molecular formulae but different properties is known as:

Compounds having the same constitution and sequence of covalent bonds but differ in relative position of their atoms or groups in space are called:

Be careful not to confuse them with constitutional isomers which also have the same molecular formula but differ in the way their atoms are connected.

The isomer of ethanol is: