Liquid limit of a soil indicates its

An undisturbed soil sample has a plastic limit of 25%, a natural moisture content of 40% and liquidity index of 50%, Its liquid limit in % will be

The formula for liquidity index is given as follows where w is the natural moisture content, wp is the plastic limit, Ip is the liquid limit. So we can calculate the liquid limit by substituting the values.

A well graded soil has a coefficient of curvature between

Number of phases in soil mass is: 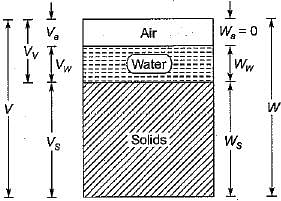 Which of the following is a measure of particle size range?

The uniformity of a soil is expressed qualitatively by a term known as uniformity coefficient, Cu, given by,

The larger the numerical value of Cu, the more is the range of particles.

for a soil mass is called:

When the soil exists below Water, it is in a submerged condition. When a volume  V of soil is sub merged in water, then according to Archimede’s principle it displaces an equal volume of water. Thus the net mass of soil when submerged is reduced.

The uniformity coefficient of soil is given as

Given for a soil sample:
Degree of saturation = 90%
Specific gravity of soil grains = 2.70
Void ratio = 0.30
The water content of the sample is

We can calculate the value of 'w' by substituting the values of G, S and e.

For distinguishing clays from silts in the field, a moist soil is rolled into a thread of 3 mm diameter. This test will indicate the

Weight of solids in soil A,

Weight of solids in soil B

Which one of the following gives the correct decreasing order of the densities of a soil sample?

Match List-I with List-ll and select the correct answer using the codes given below in the options: 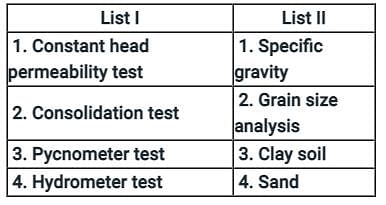 The coefficient of permeability for coarse-grained soil (Gravel and sand) is determined by means of the Constant-head permeability test. The degree of saturation of soil should be 100%.
By Darcy’s Law,

(i) This is used to determine the rate and magnitude of soil consolidation when the soil is restrained laterally and loaded axially. This test is conducted by an Oedometer. As disturbing specimens have a certain pre-consolidation pressure, so for conducting the consolidation test undisturbed soil specimen is required.

(ii) Oedometer is used to find out the void ratio at the end of various stress levels and hence curve is plotted. This curve is useful in calculating the settlement of the soil layer.

3. Pycnometer test is used to determine the specific gravity of cohesion-less soils and water content.

At liquid limit, all soils possess

It is the water content corresponding to the arbitrary limit between liquid and plastic state of consistency of soil.

It is defined as the minimum water content at which the soil is still in the liquid state, but has infinitesimal resistance against flow which can be measured by any standardised procedure.

With reference to the standard liquid limit device, it is defined as the minimum water content at which a part of soil cut by a groove of standard dimensions, will flow together for a distance of 12 mm under an impact of 25 blows in the device.
Other Important points:

Plastic limit: It is defined as the minimum water content at which a soil will just begin to crumble when rolled into a thread approximately 3 mm in diameter.

Which of the following methods is most accurate for the determination of the water content of soil?

Oven dry method is the most accurate and simplest method for water content determination.

In this method complete drying of soil sample occur and water content in sample is calculated accurately by a maintained temperature in the oven ( 105° C to 110° C) for 24 hours.

For highly organic soils a low temperature of about 60° C is preferable.

If Gypsum is present, the temperature should not be more than 80° C but for a long time.

Radiation method is based on energy loss during radio active isotropes material (E.g. cobalt-60) emmites on one end and received by detector on other end. This is an approximate method.

In calcium carbide method, Acetylene gas exerts pressure on the pressure gauge which indicate the water content present in soil sample. This is not an accurate method since no control over chemical reactions.

Sand bath method is field method and there is no control over heat given to soil sample. Therefore, it is not suitable for organic soil and soil having higher gypsum content.

A pycnometer is used to determine

Pycnometer test is used to determine the specific gravity of cohesion less soils and water content.

Dry density or in-situ unit weight is determined by using the following methods:

In hydrometer analysis for a soil mass

A hydrometer is a device used to measure the specific gravity of liquids.

The following three corrections are necessary for :

2. Temperature correction: If the temperature at the time of the test is more than that of calibration of the hydrometer, the observed reading will be less and the correction (Ct) would be positive and vice versa.

Valid range for S, the degree of saturation of soil in percentage is

Degree of saturation represents the portion of volume of voids which is filled with water i.e.