Two liquids A and B are in the ratio 4 : 3 in container X and 2 : 5 in container Y. In what ratio should the content of both container be mixed so that the resulting mixture has A and B in ratio 3 : 5.

A tank has a leak which would empty it in 8 hrs. A tap pumps water fills @ 12 litres/ minute into the tank, and it is now emptied in 10 hrs. What is the capacity of tank (in litre)?

There are 500 tickets (numbered 1 to 500) in a bowl. Find the probabaility of choosing a ticket which bears multiple of either 7 or 11. 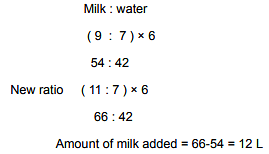 The market price of an item is 33.33% more than its cost price. If after selling the item , the profit percent obtained is 13.33% , find the discount percent given.

P, Q and R divide Rs 64800 among them in the ratio 8 : 9 : 7 respectively. Now if Q gets 33.33% more and R Rs 100 more and the same amount is distributed among them then what will be the respective new ratio of dividing the total money among them?

A certain number of people get together to contribute in the construction of an orphanage. But every month six people step out of this plan. Due to this the task is completed in half more year instead of one and half year. Then how many people were originally involved in this plan?

Find the percentage by which the volume of the cone change assuming that the radius and the height of the cone decreases by 30%?

The radius of a cylinder is 14cm and its volume is 12320 cm3 . The curved surface area of the cylinder is

The length of a rectangle is thrice the diameter of a circle. The circumference of the circle is equal to the perimeter of a square of side 88 cm. What is the breadth of the rectangle, if its perimeter is 998 cm?

The area of the largest circle, that can be drawn inside a rectangle with sides 100 cm by 91 cm, is

Choose the odd word/letters/number/number pair from the given alternatives.

Choose the odd word/letters/number/number pair from the given alternatives.

In the following question, select the missing number from the given series.

Harish is facing north. He cycles for 5 km, then turns towards the south-east direction to move 13 km and from there, he moves 12 km towards the west. In which direction/place is he from his original position?

Introducing a girl, Anita says, "She is the daughter of the only son of my paternal grandmother." How is the girl related to Anita? 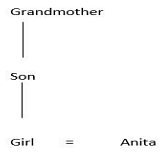 Identify the diagram that best represents the relationship among the given classes. 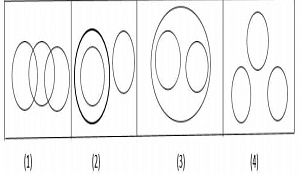 Five persons P, Q, R, S and T are sitting in a row facing north. Q sits exactly in the middle of the row. Only one person sit between Q and R. R is not neighbour of S, who sits second to the right of T. Who sits at the extreme end of the row?

Arrange the following words in a meaningful order.

From the given alternative words, select the word which cannot be formed using the letters of the given word. CARBOHYDRATE

Directions
In the following question, two statements are given each followed by two conclusions I and II. You have to consider the statements to be true even if they seem to be at variance from commonly known facts. You have to decide which of the given conclusions, if any, follows from the given statements.

Statements:
Some people are foolish.
All foolish people are unsuccessful.

Conclusion:
I. Some unsuccessful people are foolish.
II. Some people are not foolish.

Some people are foolish (I) ⇒ I.I ⇒ No conclusion (I). Hence conclusion II does not follow.

The Battle of Plassey was fought in which year?

The Battle of Plassey, fought on 23 June 1757, was a decisive British East India Company victory over the Nawab of Bengal and his French allies, establishing Company rule in South Asia which expanded over much of the Indies for the next 190 years. The battle took place at Palashi, Bengal, on the river banks of the Bhagirathi River, about 150 km north of Calcutta, near Murshidabad, then capital of undivided Bengal.

The Lion capital at Sarnath belongs to which king?

The Lion Capital of Ashoka is a sculpture of four Asiatic lions standing back to back, on an elaborate base that includes other animals. A graphic representation of it was adopted as the official Emblem of India in 1950. It was originally placed atop the Aśoka pillar at the important Buddhist site of Sarnath by the Emperor Ashoka, in about 250 BCE. The pillar, sometimes called the Aśoka Column, is still in its original location, but the Lion Capital is now in the Sarnath Museum, in the state of Uttar Pradesh, India.

The members of the Rajya Sabha are elected by?

Which of these countries has launched the largest human genome research project?

China has launched the world's largest human genome research project to document the genetic makeup of one lakh people.The objective of this project is to detect the genetic links between health and sickness and use that information to generate precision medicines for the future. The project envisages to decode the hereditary information contained in each of the 25000 known human genes.

Who is the current governer of Tripura?

Tathagata Roy is an engineer, former professor of Construction Engineering at Jadavpur University and an author. He was appointed as the Governor of Tripura in May 2015 and for some time in 2016 also held the additional charge of Governor of Arunachal Pradesh, having been both preceded and succeeded by J.P. Rajkhowa.

Himachal Pradesh Government has launched Zero Budget Natural Farming (ZBNF) project to promote organic farming. ZBNF is set of natural farming methods where cost of growing and harvesting plants is zero. It is a farming practice that believes in natural growth of crops without adding any fertilizers and pesticides or any other foriegn elements.

What is the capital of North Korea?

Which one of these is the biggest Indian state in terms of area?

Rajasthan is the largest state in India,with an area of 342,239 km followed by Madhya Pradesh , Maharashtra , Uttar Pradesh , and Jammu and Kashmir.

India's first smart policing robot was unveiled in which city in the month of December?

A Hyderabad based technology, machine learning, artificial intelligence start-up, H-Bots Robotics has developed a smart policing robot was launched in Hyderabad. The ‘robocop’ can assist police in handling law and order, and traffic management. If deployed autonomously, it can take care of security at selected spots, at malls or airports and public places.

Darwin Day is celebrated on which day?

Darwin Day is a celebration to commemorate the anniversary of the birth of Charles Darwin on 12 February 1809. The day is used to highlight Darwin's contributions to science and to promote science in general. It is celebrated around the world.

Which state government has approved Ghodazari as a new wildlife sanctuary in the state?

The Maharashtra Government has approved Ghodazari in Chandrapur district as new wildlife sanctuary in the state. The formation of this wildlife sanctuary will help provide employment opportunities to the youths from 59 villages on the fringes.

ECBs are loans in India made by non-resident lenders in foreign currency to Indian borrowers.What is B in ECB?

External commercial borrowing (ECBs) are loans in India made by non-resident lenders in foreign currency to Indian borrowers.They are used widely in India to facilitate access to foreign money by Indian corporations and PSUs (public sector undertakings).

Who among these was recently appointed as the new Deputy Prime Minister of Australia?

Which one of the following agricultural commodities of India gives largest in terms of export value?

The areas of Basmati Rice production in India are in the states of J & K, Himanchal Pradesh, Punjab, Haryana, Delhi, uttarakhand and western Uttar Pradesh. India is the leading exporter of the Basmati Rice to the global market. The country has exported 40,00,471.56 MT of Basmati Rice to the world for the worth of Rs. 21,604.58 crores (or 3,230.24 US$ Mill.) during the year 2016-17

India was ranked at which spot in the list of wealthiest countries?

Binsar Wildlife Sanctuary is situated in which of these states?

Binsar Wildlife Sanctuary is located in the Himalayas on top of the Jhandi Dhar hills. It is about 33 km north of the Almora town in Uttarakhand, India.From a place called Zero Point in Binsar one can see the Himalayan peaks like Kedarnath Peak, Shivling, Trisul and Nanda Devi. Binsar was the summer capital of the Chand Kings, who ruled over Kumaon from the 11th to 18th centuries AD. Binsar was established in 1988 for the conservation and protection of the shrinking broad leaf oak (Quercus) forests of the Central Himalayan region, and it has over 200 bird species.

Which of these dances belongs to Jammu and Kashmir?

Dumhal is a dance performed in Jammu and Kashmir by the Rauf tribe. Only the men folk of the Rauf are privileged to perform this dance , on specific occasions and at set locations. Generally, this dance is performed with wearing long, colourful robes and tall, conical caps, studded with beads and shells.

Which among the following is the World’s largest Wetland System?

The world’s largest wetland is the Pantanal, which covers 200,000 square kilometres (during the wet season) through Brazil, Paraguay and Bolivia, although 80% of it is in Brazil. It is a land of flooded grasslands, savannas and tropical forests.

In the Windows XP, what does XP stand for?

Who among the following can dismiss Governor of a state from his office?

Which of the following plants grow in the sand?

Lumen is the unit of

Which of the following has maximum protein ?

Which of the following gases are absorbed by the plant in the process of photosynthesis :

The nuclear force is

The large source of methane in India is

The gas utilised in ripening green fruits is

Who speculated that our universe is expanding?

The device employed to measure the diameters of stars and our galaxy (milky way) is called:

The political party which has opted firstly its own website in India is :

The water hydrolysis of oil by the alkalies is called :

Milk teeth in a child of 3-4 years do not include :

Cerebrum is associated with

In which of the following kinetic energy does not exist :