Nationalism is an ideology and movement that promotes the interests of a particular nation especially with the aim of gaining and maintaining the nation's sovereignty over its homeland. Hence, it is a feeling of pride and love of one's country and willingness to sacrifice anything for it.

The Moderates were the one who dominate the affairs of the Indian National Congress from 1885-1905. They were Indians but in reality British in taste, intellect, opinions and morality. They believed in patience, steadiness, conciliation and union.

Some important approaches in the line of thought of the Moderate leaders are given below. Which of the following statements are TRUE
i) The Moderates did not believe in the use of violence and only promoted constitutional means of agitation.

ii) The leaders had full faith in the British sense of fair play and justice and adopted Prayer, Petition and Protest.

iii) To spread the message of unity and political awareness they distributed pamphlets, gave lectures and wrote articles in the press.

iv) They organized processions and protest marches and also sent delegations to England for negotiations.

The correct option is D.
All the statements are correct

From the following demands of Moderates, which one is not TRUE?

Which of the following achievements of the Moderates cannot be considered TRUE?

Moderates refer to those group of western educated Indian intellectuals, who believed in legitimate and moderate means of protests like petitioning for the gradual realization of self rule in India.
They failed to attract common people. The vast majority of illiterate Indian’s were unable to connect to their political ideology
They were unable to organize a pan Indian campaign,neither did they try to increase the scale and magnitude of their political activities.
Their moderate means yielded only meager practical achievements. The British treated them with contempt and didn’t concede to their demands in most cases.

Lal Bal Pal (Lala Lajpat Rai, Bal Gangadhar Tilak, and Bipin Chandra Pal) were a triumvirate of assertive nationalists in British-ruled India in the early 20th century, from 1906 to 1918

Partition of Bengal, (1905), division of Bengal carried out by the British viceroy in India, Lord Curzon, despite strong Indian nationalist opposition. It began a transformation of the Indian National Congress from a middle-class pressure group into a nationwide mass movement.

A list of leaders are given below, identify the leader who is not considered as a Radical but a Moderate.

Banerjee was also one of the senior-most leaders of the moderate Congress — those who favoured accommodation and dialogue with the British — after the "extremists" – those who advocated revolution and political independence.

A list of leaders are given below, identify the leader who is not considered as a Moderate but a Radical.

He is a nationalist from Punjab and one of the leading members of the Radical group which was critical of the politics of petitions. He was also an active member of the Arya Samaj. Identify this great personality who fought for the freedom of India 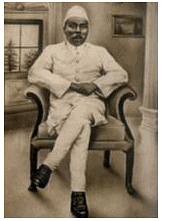 The Moderates opposed to the usage of a specific word / term because they felt that it involved the use of force. Which word/term did they oppose to?

After a major split between the Moderates and Radicals, in which year did they reunite again?

Who is this great Indian Muslim philosopher who was also considered as the Father of Muslim Nationalism?

In December 1906, under whose leadership a Muslim deputation met the Viceroy Lord Minto and requested for a separate representation and an organisation for Muslims.

The Muslim deputation (Under the leadership of Agah Khan) meets Lord Minto in 1906 at Shimla and pleaded for separate representation and an organisation for Muslims.

Identify the city marked B, in the given map of India where the session of Congress in 1906 demanded self-rule or Swaraj. 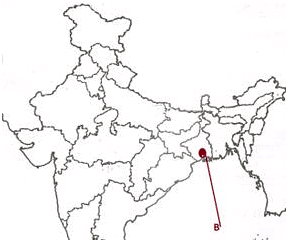