Identify the correct statement with reference to the human digestive system.     [NEET 2020]

(a) Small intestine is distinguishable into three regions, a ‘U’ shaped duodenum, a long coiled middle portion jejunum and a highly coiled ileum.
(b) A narrow finger-like tubular projection, the vermiform appendix which is a vestigial organ, arises from the caecum.
(c) Ileum opens into the large intestine.
(d) The wall of alimentary canal possesses four layers from outer to inner namely serosa, muscularis, submucosa and mucosa. Serosa is the outermost layer and mucosa is the innermost layer.

Which of the following terms describes human dentition?    [NEET 2018]

Which cells of ‘Crypts of Lieberkuhn’ secrete antibacterial lysozyme?   [NEET 2017]

Paneth cells, present in the bottom of crypts of Lieberkuhn, are rich in zinc and contain acidophilic granules. There is evidence that these cells secrete antibacterial lysozyme. Zymogen cells or peptic cells are present in the stomach and secrete pepsinogen.

Kupffer cells are present in the liver. They are phagocytic in nature and engulf disease-causing microorganisms, dead cells, etc. Argentaffin cells, found in crypts of Lieberkuhn, synthesize hormone secretin and 5 - hydroxytryptamine.

Which hormones do stimulate the production of pancreatic juice and bicarbonate?     [NEET 2016]

Cholecystokinin pancreozymins (CCKPZ) is a hormone secreted from the small intestine. It stimulates the gall bladder to release bile and the pancreas to secrete and release digestive enzymes in the pancreatic juice. Hormone secretin is secreted from the duodenum and releases bicarbonates in the pancreatic juice. It also increases the secretion of bile and decreases gastric secretion and motility.

Pancreatic juice is stimulated by the release of

Pancreatic juice secretion is principally regulated by the hormones secretin and cholecystokinin, which are produced by the walls of the duodenum, and by the action of autonomic innervation. The release of these hormones into the blood is stimulated by the entry of the acidic chyme into the duodenum.

Which group of three of the following five statements (a-e) contain is all three correct statements regarding beri-beri? [2005]
(a) a crippling disease prevalant among the native population of sub-Saharan Africa;
(b) a deficiency disease caused by lack of thiamine (vitamin B1)
(c) a nutritional disorder in infants and young children when the diet is persistently deficient in essential protein;
(d) occurs in those countries where the staple diet is polished rice;
(e) the symptoms are pain from neuritis, paralysis, muscle wasting, progressive oedema, mental deterioration and finally heart failure;

Deficiency of vitamin B1 causes Beri Beri disease. Beri Beri disease was discovered by Eijkman in 1897. Eijkman observed that the disease beri beri occuried mainly in people subsisting on a polished rice diet. This disease is rare in the western world because of food habits and food enrichment. Beri beri disease is characterized by loss of apetite and weight and vigour, retarted growth, degeneration of nerves, muscle atrophy, even paralysis, weakened heart beat and failure.

A patient is generally advised to specially, consume more meat, lentils, milk and eggs in diet only when he suffers from [2005]

A child may have a diet containing sufficient carbohydrates and fats but still suffers a serious form of malnutrition. This form of malnutrition is known as Kwashiorkar. It develops in children whose diets are deficient in protein. When the first child is weaned (accustomed to food other than its mother’s milk) after the second is born, its primary supply of protein (the mother’s milk) is lost. If the new diet is very low in protein to meet the needs of the growing individual this disease develops.
All the food stuff eg. milks, lentils, meat and eggs are rich in proteins.

Epithelial cells of the intestine involved in food absorption have on their surface:

Presence of microvilli on the epithelial cells of intestine increases  the surface area for absorption of food.

Secretin and cholecystokinin are digestive hormones. They are secreted in : [2005]

Secretin and cholecystokinin are secreted in the duodenum.
Stimulus to
(i) Secretin : Acidic chyme entry into duodenum
(ii) CCK-PZ : Presence of fat in duodenum Action (i) Secretin : Releases bicarbonates in the pancreatic juice.
(ii) CCKPZ : contracts the gall bladder to release bile. Stimulating pancreas to secrete and release digestive enzymes in the pancreatic juice.

Angiotensinogen is a protein produced and secreted by [2006]

Angiotensinogen is a protein secreted by liver cells.

A person who is one along hunger strike and is surviving only on water, will have [2007]

Due to a long hunger strike and survival on water, a person will have less urea in his urine because urea comes to kidney as a waste product from liver which is formed after the breakdown of protein fat, carbohydrate during hunger.  It is not synthesised but the synthesised ones are catabolised.

Which one of the following is a fat-soluble vitamin and its related deficiency disease? [2007]

Fat soluble vitamins are - A, D, E  and K and lack of vitamin A causes xerophthalmia.

What will happen if the secretion of parietal cells of gastric glands is blocked with an inhibitor? [2008]

If the secretion of parietal cells of gastric glands is blocked with an inhibitor, in the absence of HCI secretion, inactive pepsinogen is not converted into the active enzyme pepsin.

Which one of the following is the correct matching of the site of action on the given substrate, the enzyme acting upon it and the end product? [2008]

Small intestine- Starch disaccharide  (maltose) Small intestine is the portion of the alimentary canal between the stomach and large intestine. It is subdivided into the duodenum, jejunum, and ileum. It plays an essential role in the final digestion and absorption of food.

When breast feeding is replaced by less nutritive food low in proteins and calories; the infants below the age of one year are likely to suffer from: [2009]

If breast feeding is replaced by less nutritive food low in proteins and calories; the infants below the age of (one year are likely to suffer from Marasmus.
Marasmus is a form of malnutrition that occurs when there is not enough protein in the diet.This disease is more common in very poor countries. It often occurs during a drought or other natural disaster, or during political unrest. These conditions are responsible for a lack of food, which leads to malnutrition.

A young infant may be feeding entirely on mothers milk which is white in colour but the stools which the infant passes out is quite yellowish. What is this yellow colour due to ? [2009]

Young infant may be feeding entirely on mother’s milk which is white in colour but the stools which the infant passes out is quite yellowish because bile pigments passed through bile juice. Bile pigments are any of several coloured compounds derived from porphyrin that are found in bile; principally bilirubin and biliverdin. Bile pigment is produced regularly when old red blood cells are broken down, mainly by the spleen. In some blood-disorders where the red cells are destroyed, more bile pigment is produced.

Which one of the following statements is true regarding digestion and absorption of food in humans? [2009]

Fructose and amino acids are absorbed through intestinal mucosa with the help of carrier ions like Na+.Carbohydrates are absorbed as monosaccharides (simple sugars such as glucose, fructose, and galactose that cannot be further broken down by hydrolysis) or as disaccharides carbohydrates (such as sucrose, lactose, maltose, and dextrin that can be hydrolyzed to two monosaccharides). These simpler molecules, however, must be obtained by the breaking down of polysaccharides, complex carbohydrates that contain many monosaccharides.
Chief among these is amylase, a starch that accounts for 20 percent of dietary carbohydrate.

Which one of the following pairs of food components in humans reaches the stomach totally undigested? [2009]

Fat and cellulose is the pair of food components in human reaches the stomach totally undigested.

If for some reason our goblet cells are non functional, this will adversely affect: [2010]

Goblet cells, found in the intestinal mucosal epithelium, secrete mucus. The mucus lubricates the food for an easy passage. So, if for some reason, goblet cells become non-functional, it will adversely affect the smooth movement of food down the intestine.

Two friends are eating together on a dining table. One of them suddenly starts coughing while swallowing some food. This coughing would have been due to improper movement of:[2011]

The coughing would have been due to improper movement of epiglottis.

Which one of the following enzymes carries out the initial step in the digestion of milk in humans? [2011]

In humans milk protein digesting enzyme in stomach is pepsin. In calves it is rennin. Rennin is also present in small amounts in human infants but not adults. Pepsin acts on water soluble caseinogen (milk protein) to form solubles 'casein'. This combines with calcium salts to form insoluble calcium paracaseinate, which gets readily digested enzymatically.

Answer is B  "pepsin"

One of the constituents of the pancreatic juice while poured into the duodenum in humans, is: [2011M]

Because it is inactive form and we know that all enzymes of pancreas are secreted in this form. Enzyme enterokinase is secreted from the duodenal mucosa, at the chemical stage that changes the inactive pancreatic secretion trypsinogen to trypsin.

Which one of the following correctly represents the normal adult human dental formula ?[2011M]

The adult dental formula of human is Incisor

Anxiety and eating spicy food together in an otherwise normal human, may lead to[2012]

Anxiety and eating spicy food together in normal healthy man can lead to indigestion which is difficulty in digestion. 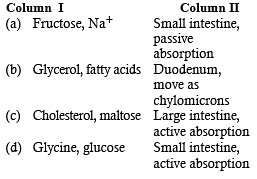 Which enzymes are likely to act on the baked potatoes eaten by a man, starting from the mouth and as it moves down the alimentary canal? [NEET Kar. 2013]

Chemical process of digestion started in the oral cavity by the hydrolytic action of the carbohydrate (potato contains starch) splitting enzyme, the salivary amylase. Carbohydrates in the chyme are hydrolysed by pancreatic amylase into disaccharides.