A ship of mass 3 × 107 kg initially at rest, is pulled by a force of 5 × 104 N through a distance of 3m. Assuming that the resistance due to water is negligible, the speed of the ship is

A block of mass 0.1 kg is held against wall applying horizontal force of 5 N on the block .If coefficient of friction between the block and wallis 0.5 then tbe magnitude of frictional force acting on the block is ?

A block of mass 0.1 is held against a wall applying a horizontal force of 5 N on the block. If the  coefficient of friction between the block and the wall is 0.5, the magnitude of the frictional force acting on the block is :

A small block is shot into each of the four tracks as shown below. Each  of the tracks rises to the same height. The speed with which the block enters the track is the same in all cases. At the highest point of the track, the normal reaction is maximum in

For circular motion to take place, a centripetal force is required which is provided by (mg + N).

where r is the radius of curvature at the top.
If the surface is smooth then on applying conservation of mechanical energy, the velocity of the body is always same at the top most point. Hence, N and r have inverse relationship. From the figure it is clear that r is minimum for first figure, therefore N will be maximum.
Note : If we do not assume the surface to be smooth, we cannot reach to a conclusion.

KEY CONCEPT : For  the maximum possible value of α, mg sin α will also be maximum and equal to the frictional force.
In this case f is the limiting friction. The two forces acting on the insect are mg and N. Let us resolve mg into two components.
mg cos α balances N.
mg sin α is balanced by the frictional force.

The pulleys and strings shown in the figure are smooth and of negligible mass. For the system to remain in equilibrium, the angle θ should be

The tension in both strings will be same due to symmetry.

For equilibrium in vertical direction for body B we have

A string of negligible mass going over a clamped pulley of mass m supports a block of mass M as shown in the figure. The force on the pulley by the clamp is given by

What is the maximum value of the force F such that the block shown in the arrangement, does not move?

The force of friction provides this acceleration.

The string between blocks of mass m and 2m is massless and inextensible. The system is suspended by a massless spring as shown. If the string is cut find the magnitudes of accelerations of mass 2m and m (immediately after cutting)

Two particles of mass m each are tied at the ends of a light string of length 2a. The whole system is kept on a frictionless horizontal surface with the string held tight so that each mass is at a distance 'a' from the centre P (as shown in the figure).
Now, the mid-point of the string is pulled vertically upwards with a small but constant force F. As a result, the particles move towards each other on the surface. The magnitude of acceleration, when the separation between them becomes 2x, is 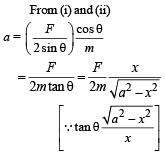 where A and k are constants.

The angle between the force and the momentum is

A block of base 10 cm × 10 cm and height 15 cm is kept on an inclined plane. The coefficient of friction between them is √3. The inclination θ of th is inclined plane from the horizontal plane is gradually increased from 0°. Then

Therefore, option (a) is wrong.
For the block to topple, the condition of the block will be as shown in the figure. 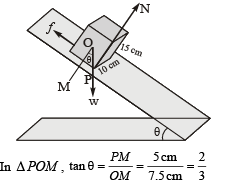 A block of mass m is on an inclined plane of angle θ. The coefficient of friction between the block and the plane is m and tan θ > μ. The block is held stationary by applying a force P parallel to the plane. The direction of force pointing up the plane is taken to be positive. As P is varied from P1 = mg(sinθ – μ cosθ) to P2 = mg(sinθ + μ cosθ), the frictional force f versus P graph will look like

A ball of mass (m) 0.5 kg is attached to the end of a string having length (L) 0.5 m. The ball is rotated on a horizontal circular path about vertical axis. The maximum tension that the string can bear is 324 N. The maximum possible value of anguar velocity of ball (in radian/s) is

A car sometimes overturns while taking a turn. When it overturns, it is