If there is a remainder of 5 when x is divided by 9, it must be true that x is five more than a multiple of 9. We can express this algebraically as x = 9a + 5, where a is a positive integer.

If k and x are positive integers and x is divisible by 6, which of the following CANNOT be the value of

can be simplified to  12√2kx. Given that x is divisible by 6, for the purpose of solving this problem x might be restated as 6y, where y may be any positive integer.  The expression

could then be further simplified to 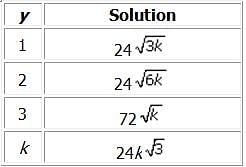 The answer choice that cannot be the value of

is 24√k. For this expression to be a possible solution, y would have to equal 1/3, which is not a positive integer.  Put another way, this solution would require that x = 2, which cannot be true because x is divisible by 6.
The correct answer is B.

First consider an easier expression such as 105 – 560. Doing the computation yields 99,440, which has 2 9's followed by 440.
From this, we can extrapolate that 1025 – 560 will have a string of 22 9's followed by 440.
Now simply apply your divisibility rules:
You might want to skip 11 first  because there is no straight forward rule for divisibility by 11. You can always return to this if necessary. [One complex way to test divisibility by 11 is to assign opposite signs to adjacent digits and then to add them to see if they add up to 0. For example, we know that 121 is divisible by 11 because -1 +2 -1 equals zero. In our case, the twenty-two 9s, when assigned opposite signs, will add up to zero, and so will the digits of 440, since +4 -4 +0 equals zero.]

We could also write an expression for the quotient x/y:

The decimal portion of the possible quotients in I, II and III are another story.  From the equation we have above, for a decimal to be possible, it must be something that can be expressed as 60/y, since that is the portion of the quotient that corresponds to the decimal.  But couldn't any decimal be expressed as 60 over some y?  The answer is NO because we are told in the question that y is an integer.

If the ratio of cupcakes to children is 104 to 7, we can first express the number of cupcakes and children as 104n and 7n, where n is some positive integer.  If n = 1, for example, there are 104 cupcakes and 7 children; if n = 2, there are 208 cupcakes and 14 children, etc.
We are told in the problem that each of the children eats exactly x cupcakes and that there are some number of cupcakes leftover (i.e. a remainder) that is less than the number of children.  Let’s call the remainder R.  This means that means that the number of children, 7n, goes into the number of cupcakes, 104n, x times with a remainder of R.  We can use this to write out the following equation:
104n = 7nx + R.
We are asked here to find out information about the  divisibility R.  Often times with remainder questions the easiest thing to do is to try numbers:
If n = 1, the problem becomes what is true of the remainder when you divide 104  by 7.
n = 1   104/7 = 14 remainder 6
n = 2   208/14 = 14 remainder 12
n = 3   312/21 = 14 remainder 18
Notice the pattern here.  With 104 and 7, we started out with a remainder of 6.  When we doubled both the numerator (104) and the denominator (7), the quotient remained the same (14), and the remainder (6) simply doubled.  In this particular problem, the remainder when n = 1 was 6, which as we know is divisible by 2 and 3.  Since all subsequent multiples of 104 and 7 (i.e. n = 2, 3, 4…) will yield remainders that are multiples of this original 6, the remainder will always be divisible by 2 and 3 and the answer here is D.
There is a more algebraic reason why the remainder always remains a multiple of the original remainder, 6.  Let's take for example a number x that when divided by y, qives a quotient of q with a a remainder of r.  An equation can be written: x = qy + r.  If we multiply p by some constant, c, we must multiply both sides of the equation above, i.e. xc = cqy + cr.  Notice that it is not just the x and y that get multiplied by a factor of c, but also r, the remainder!   We can generalize to say that if x divided by y has a quotient of q and a remainder of r, a multiple of x divided by that same multiple of y will have the original quotient and the same multiple of the original remainder.

If y is a multiple of 19, the remainder must be zero.
The correct answer is A. 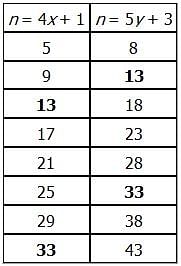 The first two values for n that work with both the x and y expressions are 13 and 33. Their sum is 46.
The correct answer is B.

If n is an integer and n4 is divisible by 32, which of the following could be the remainder when n is divided by 32?

If n is divisible by only one 2, then n4 would be divisible by exactly four 2's (since the prime factors of n4 have no source other than the integer n).

Susie can buy apples from two stores: a supermarket that sells apples only in bundles of 4, and a
convenience store that sells single, unbundled apples. If Susie wants to ensure that the total number of
apples she buys is a multiple of 5, what is the minimum number of apples she must buy from the
convenience store?