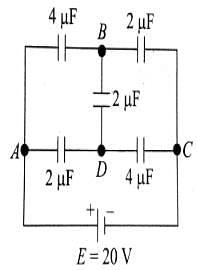 If the potential of C is zero, then

The capacitance of a metallic sphere will be 1mF, if its radius is nearly

The expression of capacitance of metallic sphere is C=4πϵ0​r (The capacitance of a single spherical conductor means that we imagine a spherical shell of infinite radius surrounding the first conductor.)
Therefore,

Two capacitors of capacitances 1mF and 3mF are charged to the same voltages 5V. They are connected in parallel with oppositely charged plates connected together. Then

Two spherical conductors A and B of radii R and 2R respectively are each given a charge Q. When they are connected by a metallic wire. The charge will

The capacity of a parallel plate condenser is C. Its capacity when the separation between the plates is halved will be

If the p.d. across the ends of a capacitor 4mF is 1.0 kilovolt. Then its electrical potential energy will be 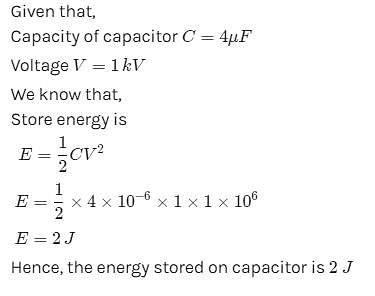 The energy of a charged capacitor resides in

The capacitance of a parallel plate condenser does not depend upon

The capacitance C is the amount of charge stored per volt, or C=QV. The capacitance of a parallel plate capacitor is C=ϵ0Ad, when the plates are separated by air or free space.

The energy density in a parallel plate capacitor is given as 2.2 × 10-10 J/m3. The value of the electric field in the region between the plates is - 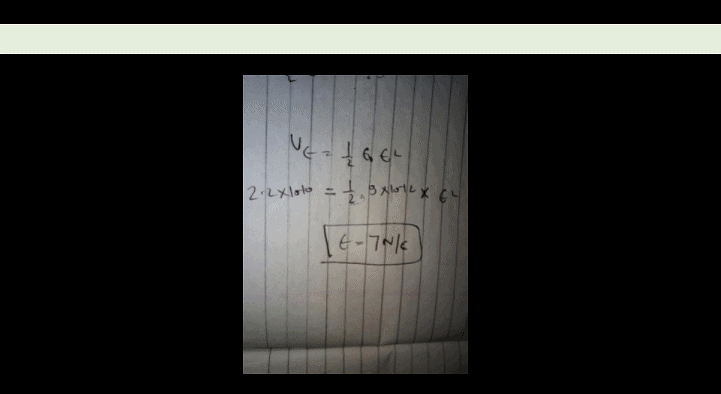 Two spherical conductors of capacitance 3.0mF and 5.0mF are charged to potentials of 300volt and 500volt. The two are connected resulting in redistribution of charges. Then the final potential is

A parallel plate capacitor of capacitance C is connected to a battery and is charged to a potential difference V. Another capacitor of capacitance 2C is similarly charged to a potential difference 2V. The charging battery is now disconnected and the capacitors are connect in parallel to each other in such a way that the positive terminal of one is connected to the negative terminal of the other. The final energy of the configuration is 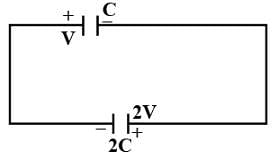 Charge on 2μf capacitor=10vx2μF=20μC=Q1
Charge on 4μf capacitor=4μFx20v=80μC=Q2
Now, these capacitors are connected in a single loop in given manner,

The figure shows a diagonal symmetric arrangement of capacitors and a battery
Identify the correct statements. 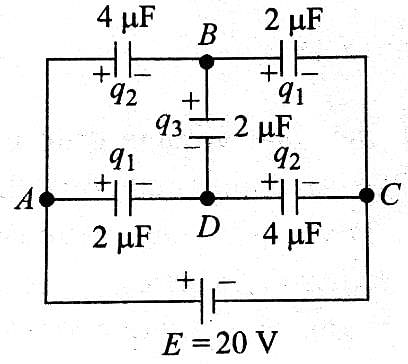 Plate A of a parallel air filled capacitor is connected to a spring having force constant k and plate B is fixed. If a charge +q is placed on plate A and charge _q on plate B then find out extension in spring in equilibrim. Assume area of plate is `A' 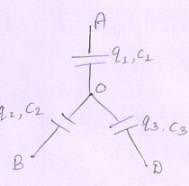 Five capacitors are connected as shown in the figure. Initially S is opened and all capacitors are uncharged. When S is closed, steady state is obtained. Then find out potential difference between the points M and N.

Find the potential difference Va - Vb between the points a and b shows in each parts of the figure.

Each plate of a parallel plate air capacitor has an area S. What amount of work has to be performed to slowly increase the distance between the plates from x1 to x2 If the charge of the capacitor, which is equal to q or

Each plate of a parallel plate air capacitor has an area S. What amount of work has to be performed to slowly increase the distance between the plates from x1 to x2 If the voltage across the capacitor, which is equal to V, is kept constant in the process.

If charge on left plane of the 5F capacitor in the circuit segment shown in the figure is-20C, the charge on the right plate of 3F capacitor is

In the circuit shown, the energy stored in 1μF capacitor is

A capacitor C1 = 4mF is connected in series with another capacitor C2 = 1mF. The combination is connected across a d.c. source of voltage 200V. The ratio of potential across C1 and C2 is

A 5.0 mF capacitor having a charge of 20 mC is discharged through a wire of resistance of 5.0 W. Find the heat dissipated in the wire between 25 to 50 ms after the capactions are made.

A charged capacitor is allowed to discharge through a resistance 2Ω by closing the switch S at the instant t = 0. At time t = ln2μs, the reading of the ammeter falls half of its initial value. The resistance of the ammeter equal to

A capacitor C =100μF is connected to three resistor each of resistance 1 kW and a battery of emf 9V. The switch S has been closed for long time so as to charge the capacitor. When switch S is opened, the capacitor. Discharges with time constant

In the transient shown the time constant of the circuit is :

The two plates X and Y of a parallel plate capacitor of capacitance C are given a charge of amount Q each. X is now joined to the positive terminal and Y to the negative terminal of a cell of emf E = Q/C.

The answer provided in the forum is wrong. the correct answer is option A.B,C.
Solution:
As the emf of cell is ϵ=Q/C, charge of amount Q will flow from the positive terminal to the negative terminal of the cell through the capacitor.
As the Y is connected to the negative terminal of the cell so it is grounded and the total charge on plate Y will be zero.
Here cell charge the capacitor plate X and its total charge =(Q+Q)=2Q
The energy will supply by cell is U=(½)​Cϵ2
The correct option is A B C only.

Two capacitors of capacitances 1mF and 3mF are charged to the same voltages 5V. They are connected in parallel with oppositely charged plates connected together. Then

Each plate of a parallel plate capacitor has a charge q on it. The capacitor is now connected to a battery. Now,

When a parallel plates capacitor is connected to a source of constant potential difference,

When two identical capacitors are charged individually to different potentials and connected parallel to each other, after disconnecting them from the source

Two thin conducting shells of radii R and 3R are shown in the figure. The outer shell carries a charge +Q and the inner shell is neutral. The inner shell is earthed with the help of a switch S. 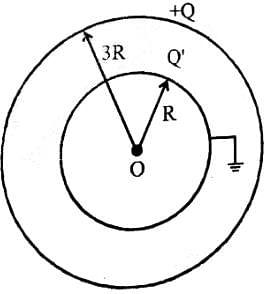 Two capacitors of 2mF and 3mF are charged to 150 volt and 120 volt respectively. The plates of capacitor are connected as shown in the figure. A discharged capacitor of capacity 1.5 mF falls to the free ends of the wire. Then

In the circuit shown initially C1, C2 are uncharged. After closing the switch

A circuit shown in the figure consists of a battery of emf 10V and two capacitance C1 and C2 of capacitances 1.0mF and 2.0mF respectively. The potential difference VA _ VB is 5V 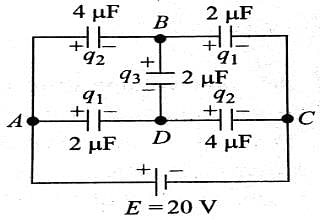 If the potential of C is zero, then

Capacitive impedance is inversely proportional to frequency. Hence at very low frequencies the impedance is almost infinity and hence acts as an open circuit and no current flows through it.

The charge across the capacitor in two different RC circuits 1 and 2 are plotted as shown in figure.

Choose the correct statement (s) related to the two circuits

The charge across the capacitor in two different RC circuits 1 and 2 are plotted as shown in figure.

Identify the correct statement(s) related to the R1, R2, C1 and C2 of the two RC circuits.