A bullet of mass m moving with a horizontal velocity n strikes a stationary block of mass M suspended by a spring of length L. The bullet gets embedded in the block. Prove that the maximum angle made the string after impact is

The situationn is shown in figure. Let n' be the velocity of the block with the embedded bullet after impact.
Applying the law of conservation of momentum, i.e., 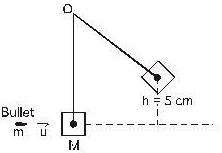 Momentum before impact = Momentum after impact
mn = (M + m)n'......(1)
Applying the law of conservation of mechanical energy, i.e., K.E. of the combined mass = P.E. at the highest point

A sphere has a perfectly elastic oblique collision with another identical sphere which is initially at rest. The angle between their velocities after the collision is

A girl throws a ball with initial velocity u at an inclination of 45o. The ball strikes the smooth vertical wall at a horizontal distance d from girl and after rebounding returns to her hand. What is the coefficient of restitution between wall and ball?

As the wall is smooth, the vertical component of the impulse it receives is zero. The total time of flight is given by

where e = coefficient of restitution.

Solving we get e =

A uniform chain of mass m and length I hangs on a thread and touches the surface of a table by its lower end. Find the force exerted by the table on the chain when half of its length has fallen on the table. The fallen part does not form heap.

Weight of the portion BC of the chain lying on the table, W = mg/2(downwards)
Thrust force 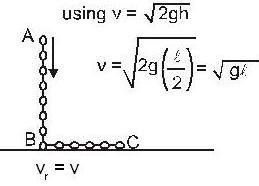 (downwards)
Net force eerted by the  chain on the table is

So, from Newton's thrid law the force exerted by the table on the chain will be 3/2 mg (vertically upwards).

It l1 , l2 and l3 are the moments of inertia about, a diameter of a thin hollow sphere, solid sphere and disc having same mass and same radius respectively, then which one of the following is correct?

A uniform rod of length l is free to rotate in a vertical plane about a fixed horizontal axis through B. The rod begins rotating from rest from its unstable equilibrium position. When  it has turned through an angle q, its angular velocity w is given as

When the rod rotates through an angle q, the centre of gravity falls through a distance h from DBG'C,

..(1)
The decrease in P.E. is equal to the kinetic energy of rotation

Two bodies with moment of inertia l1 and l2 and (l1>l2) have equal angular momenta. If K.E. of rotation are E1 and E2 then

The object in Figure might be a billiard ball a steel ball bearing, or the world's largest ball of string. Find the moment of the inertia about an axis through the center of the sphere. 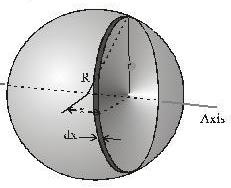 We divide the sphere into thin disks of thickness dx. The radius r or the disk shown is 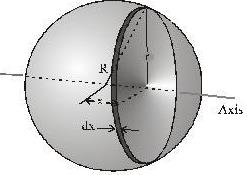 Integrating this expression from x = 0 to x = R gives the moment of inertia of the light hemisphere. From symmetry, the total I for the entire sphere is just twice of this:

Carrying out the integration, we obtain

By comparing the expression for I and M, we find

Figure shows a hollow, uniform cylinder with length L, inner radius R1, and outer radius R2, It might be a steel cylinder in a printing press or a sheet- steel rolling mill. The moment of inertia about the axis of symmetry of the cylinder is, 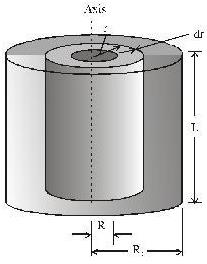 We choose a thin cylindrical shell of radius r, thickness dr, and length L as a volume element. All parts of this element are at very nearly the same distance from the axis. The volume of the element is very nearly equal to that of a flat sheet with thickness dr, length L, and width 2pr(the circumference of the shell).
Then
dm = p dV = p (width x length x thickness)
= r(2prL dr) .....(1) 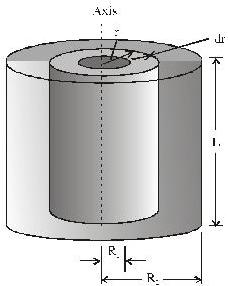 The moment of inertia is given by

If we express the moment of inertia in terms of the total mass M of the body.
Then
Q m = rV ......(3)
and the volume of the cylindrical shell is 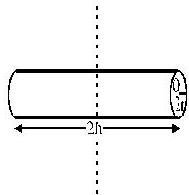 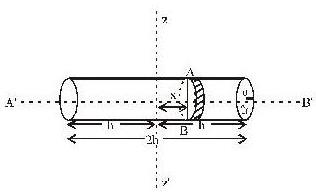 Let radius & height of solid cylinder is 2r and 2h. Assume that it is made up by small disc having radius 2r. Now we take a disc of width of dx and at x distance from zz' axis volume of thin disc is = π(2r)2dx
so, mass dm =

By theorem of "parallel axes"  moment of inertia w.r.t. axis xz is

So, Total moment of inertia,

Consider the following statements with reference to X-rays:
1. They produce heat when absorbed by matter.
2. They are generated when fast-moving electrons strike a metal target.
3. They can penetrate through a thin sheet of aluminium.
Which of the statements given above are correct?

The following statements are reference to X-rays:
1. They produce heat when absorbed by matter : X-ray beam attenuation. As the x-ray beam passes through tissue, photons get absorbed so there is less energy; this is known as attenuation. It turns out that higher energy photons travel through tissue more easily than low-energy photons (i.e. the higher energy photons are less likely to interact with matter).
2. They are generated when fast-moving electrons strike a metal target : An electromagnetic wave called x-ray is produced when fast moving electrons impact on high atomic weight substances. However, when these fast moving electrons strike on a metal target, a photoelectric effect occurs.
3. They can penetrate through a thin sheet of aluminium : X-Rays will Pass Straight through Aluminium of Almost ANY Thickness as it's Density is so Low !! But the Crystalline Structure of Diamond makes it Totally Opaque to X-Rays !! X-Rays do not "see"! But yes, they can pass easily through a single sheet of aluminum foil.

We know that in elastic collision both kinetic energy and momentum remains conserved.

Two particles A and B initially at rest, moves towards each other under a mutual force of attraction. If at an instant the speed of A is V and that of B is 2V then the speed of the centre of mass of the system is

According to principle of Conservation of momentum under mutual attractive force. The momentum of centre of mass remains constant, since the system is initially at rest, hence is momentum is zero.

by emitting a positron and a neutrino. The positron and the neutrino are observed t move at right angles to each other and carry momenta 2 x 10-22 and 5 x 10-23 kg  msec-1 respectively. Then the momentum of the recoiling nucleus is

A uniform chain of mass m and length I hangs on a thread and touches the surface of a table by its lower end. find the force exerted by the table on the chain when half of its length has fallen on the gable. The fallen part does not from heap.

is mass per unit length of chain

Net force exerted by the chain on the table is

So, from Newton's third law the force exerted by the table on the chain will be
3/2 mg (vertically upwards)

just prior to a collision during which they become permanently attached to each other.

Now applying the law of conservation of momentum

where v is the velocity of the combined particle in the laboratory system. Note that v is identical to V, i.e.,

*Multiple options can be correct
QUESTION: 17

A particle is released at x = 1 in a force field

which one of the following statement is true?

A particle is acted upon by a force

Which of the following statements are false?

If a force or a vector quantity is conservative the

is conservative then a scalar potential v exist such that

of two dimensional flow field is given by

Stream function ψ is given by

Equation of streamline is given by

where u and v are velocity components of fluid velocity

So, velocity of fluid

The flow is irrotational if

the velocity of fluid

can be expressed as gradient of scaler potential

A container of large uniform cross-sectional area A resting on a horizontal surface has two immiscible, non-viscous and incompressible liquids of densities d and 2d, each of height H/2 as shown. The lower density liquid is open to the atmosphere having pressure P0. A tiny hole of area s(s<<A) is punched on the vertical side of the container at a height h (h < H/2). Determine: 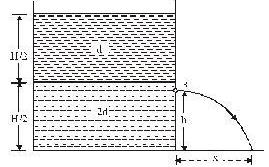 Here the effective height of orifice cannot be taken as (H-h) due to the presence of two liquids. Using Berrnoulli,s theorem just inside and just outside the orifice, we have 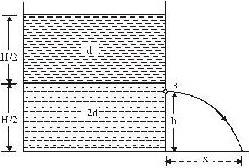 where V is the velocity of efflux

Differentiate x with respect to h and equate it to zero for maximum h.

Value of h put in equation(3)

At what time a Foucault's pendulum completes a round when it is at 450N latitude on north pole?

An astronaut travelling in a rocket moving vertically upwards with an acceleration of 4g weighs 300kg. Then find out the weight (in Kg) of the astronaut in the laboratory.

The apparent weight is given by

Therefore the weight of the astronaut in the aboratory is 60kg.

A solid sphere of mass 2m and radius a/2 is rolling with a linear speed v on a flat surface without slipping. The magnitude (in mav) of the angular momentum of the sphere w.r.t. a point along the path of the sphere on the surface is....

A solid sphere is rolling along the flat surface without slipping and p is the point on the surface of sphere.
So, angular momentum of sphere about P is L = 2mv * a/2

The gun will move in opposite direction to that of the bullet with velocity 5 m/s. 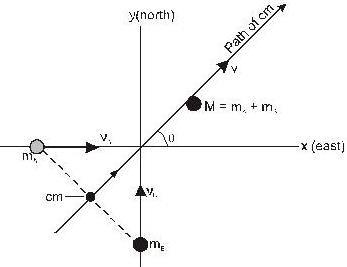 What is the velocity (km/hr) v of the couple after impact?

From equation (2) we then have

A block of mass 0.18 kg is attached to a spring of force constant 2 N/m. The coefficient of friction between the block and the floor is 0.1. Initially, the block is at rest and the spring is un-stretched. An impulse is given to the block as shown in the figure. The bock slides a distance of 0.06m and comes to rest for the first time. The initial velocity of the block in m/sec is V = N/10. Then N is.... 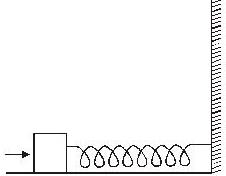 It is given that the block slides a distance of 0.06m and comes to the rest for the first time.
μ = 0.1
By the energy conservation

To complete the vertical circle 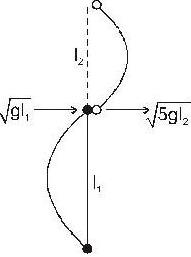 A ball of mass m moving at a speed v makes a head-on wllision with an identical ball at rest. The kinetic energy of the balls after the collision is 80% of the original. Find the coefficient of restilation.

A rocket, with an initial mass of 3000kg, is launched vertically upwards from rest under gravity. The rocket burns fuel at the rate of 40 kg per deeond. The burnt watter is ejected vertically downwards with a speed of 4000 m/see relative to the rocket. If burning stops after one minute. Find the maximum velocity of rocket.

We know that velocity equation is givven by

A uniforem chain of mass m and length I hangs on a thread and touches the surface of a lable by its lower end. Find the force exerted by the table on the chain when three-founth of its length has ballen m the lable. The fallen part does not form heap.

Weight of the portion BC of the chein

Net force exerted by the chain on the table is

The force enerfed by the table on the chain will be 5/4 mg.