The chlorophyll pigment is readily soluble in:-

The chlorophyll pigment is readily soluble in acetone. Chlorophylls possess a phytyl chain which is bound to a porphyrin ring system. The possession of the phytyl side chain, which is esterified to the carboxyl group of the ring, gives the chlorophylls their lipid character. Moreover, chlorophylls are fat-soluble compounds that can be extracted from water-containing living plant tissue by organic solvents such as acetone, methanol, or ethanol, which can take up water.

Centrioles are found in:-

The centrosome is present in the cytoplasm of the animal cell. It is made up of two centrioles and helps to organize microtubules and pull chromatids apart during cell division. So, the correct answer is option C.

Site of Calvin Cycle is -

The Calvin cycle, Calvin–Benson–Bassham (CBB) cycle, reductive pentose phosphate cycle or C3 cycle is a series of biochemical redox reactions that take place in the stroma of chloroplast outside the thylakoid membranes, in photosynthetic organisms. The Calvin cycle is a chemical reaction that converts carbon dioxide and other compounds into glucose. This reaction takes the products (ATP and NADPH) of light-dependent reactions and perform further chemical processes on them.

Enzymes are synthesized on :-

Larger subunit of ribosome is dome shaped and attached to ER by :-

Which is not true about sphaerosomes :-

Spherosomes or oleosomes are small cellular organelles enclosed by a single membrane that is responsible for the storage and synthesis of lipid.
They are obtained from the endoplasmic reticulum, they are surrounded by a single phospholipid monolayer and are found in only plant cells.
So, the correct answer is 'Involved in photorespiration'.

Match the column–I with column–II and select  the correct answer :- 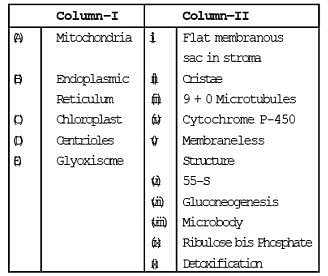 ENDOPLASMIC RETICULUM - iv) Cytochrome P-450 : Cytochrome P450 (CYP) is a large family of well-conserved integral membrane proteins localized primarily in the membrane of the endoplasmic reticulum (ER), where these enzymes metabolize a variety of both endogenous and exogenous compounds.

x) Detoxification: In most cells the smooth endoplasmic reticulum (abbreviated SER) is scarce.  It carries out the metabolism of carbohydrates, detoxification of natural metabolism products and of alcohol and drugs, attachment of receptors on cell membrane proteins, and steroid metabolism.

CENTRIOLES - iii) 9 + 0 microtubules : The centrosome is made up of 2 centrioles which are right angled to each other and is composed of a protein known as tubulin. Each centriole has 9 peripheral groups of microtubules (triplet) with no central microtubules thus, this type of arrangement in centriole is called 9+0 pattern.

GLYOXYSOME - vii) Glucogenesis : Glyoxysomes (as all peroxisomes) contain enzymes that initiate the breakdown of fatty acids and additionally possess the enzymes to produce intermediate products for the synthesis of sugars by gluconeogenesis.

Plastids are the double wall membranous organelles, which are mostly present in the plant cell. It is stores oil, starch, and proteins inside it. The plastid which stores oil is known as elaioplast. Starch storing plastids are known as amyloplast while the aleuroplast stores proteins. Potato is a rich source of starch so, it contains amyloplast as a major plastid.
So, the correct answer is option A.

In higher plants, the chloroplast are :-

Chloroplast are the organelles which are involved in photosynthesis. They are variously shaped as oval, round or discoidal. In higher plants, they are generally found as discoidal or oval in shape.

So, the correct option is A.

Which ion holds the ribosomal subunits together

Owing to its abundance and highest charge density among all biological ions, magnesium is most suitable for neutralizing the negative charge density of RNA nucleotide backbone. Ribosomal subunits associate to form complete ribosome in presence of Mg ion.

Mitochondria and chloroplast are considered to be endosymbionts of cell because they :–

Mitochondria and chloroplast are the organelles which possess their own DNA and ribosomes and considered as endosymbionts of a cell. They are originated by the endosymbiosis  fro proteobacteria and cyanobacteria respectively.

Peroxisomes contain oxidases. A major function of the peroxisome is the breakdown of very long chain fatty acids through β-oxidation. In animal cells, the very long fatty acids are converted to medium chain fatty acids, which are subsequently shuttled to mitochondria where they are eventually broken down to carbon dioxide and water.

Spherosomes also are known as plant lysosomes, single half unit membrane covered small spherical organelles which synthesize and store fats. They develop from the endoplasmic reticulum. They are spherical bodies with a diameter of about 0.5-1 mm. They contain granular contents, rich in lipids but also have some proteins. Some proteins are probably enzymatic and take part in the synthesis of fat and lipids. Thus, the correct answer is option A.

Which one of the following statements is not correct?

The correct option is Option C.

Each ribosome consists of 2 subunits called large and smaller subunits. The association and dissociation of subunits of ribosomes depend on Mg ion concentration.

Mitochondria and chloroplasts can grow and divide to reproduce themselves due to the presence of its own DNA and partially depend on other cellular components. So, called as semi-autonomous organelles.

During cell division, the nuclear envelope disappears in prophase and reappears in telophase stage.

Cytochrome P-450 is present in mitochondria and endoplasmic reticulum and absent in Golgi. It is an important protein which is involved in the metabolism.

Factory of ribosome in a cell is :–

Nucleolus is the largest structure in the nucleus of a cell. It acts as a site for synthesis of ribosomes. They also have other important functions like assembly of signal recognition particles and plays an important role in the cell's response to stress.

What is the angle between two centriole of a centrosome :–

The centrosome is located in the cytoplasm usually close to the nucleus. It consists of two centrioles oriented at right angles or 90o to each other embedded in a mass of amorphous material containing more than 100 different proteins. It is duplicated during S-phase of the cell cycle. Just before mitosis, the two centrosomes move apart until they are on opposite sides of the nucleus. As mitosis proceeds, microtubules grow out from each centrosome with their plus ends growing toward the metaphase plate. These clusters of microtubules are called spindle fibers.

So, the correct answer is option D.

Self duplication does not occur in :–

Mitochondria and chloroplast are the semi autonomous organelles because they have their own DNA which helps them to replicate on their own. Centrioles also duplicate during the process of cell division when the DNA replicates. Ribosomes are not capable of self-duplication.
so, the correct answer is option D.

Ribosome attached with rough E.R. by the help of

In which tubulin protein is not present :–

In which of the following cell centriole is absent –

Centriole is absent in nerve cells. Once nerve cells and red blood cells become specialized they leave the cell cycle and will no longer divide so there is no need for centrioles.

Ribosomes contains protein and RNA. The proteins are positively charged and the RNA carries negative charge.Here the RNA plays fundamental role in its structure and its content is also more than proteins. Hence Ribosomes are negatively charged.

Spherosomes, also referred to as lipid bodies or oleosomes, are vesicles that stores triacylglycerol in the form of oil (during seed development). They are surrounded by a phospholipid monolayer - derived from ER. It is the cell organelle responsible for synthesis of cutin and wax.

On which concentration of Mg+2 ions dimer of ribosome is formed :–

Mg2+ and K+ are the prevalent di- and monovalent cations inside the cells in all three domains, playing a dominant role in structure and function of biological macromolecules.
Ribosomes bind a substantial fraction of total Mg2+ and K+ cations. Mg2+ has the highest charge density from all ions in cells, due to its small ionic radius.
Polyribosomes and the bulk of 70S ribosomes dissociates reversibly to subunits at about 0.01 M Mg++.

The peroxisomes are associated with the phenomenon of :–

The peroxisomes are associated with the phenomenon of photorespiration and degradation of H2O2. Certain enzymes within the peroxisome, by using molecular oxygen, remove hydrogen atoms from specific organic substrates, in an oxidative reaction, producing hydrogen peroxide.

Factory for synthesis of sugars in autotrophic eukaryotes is :–

Factory for synthesis of sugars in autotrophic is chloroplast. Chloroplasts are organelles, specialized subunits, their main role is to conduct photosynthesis, where the photosynthetic pigment chlorophyll captures the energy from sunlight, and stores it in the energy storage molecules ATP and NADPH while freeing oxygen from water. They then use the ATP and NADPH to make organic molecules from carbon dioxide in a process known as the Calvin cycle. Chloroplasts carry out a number of other functions, including fatty acid synthesis, much amino acid synthesis, and the immune response in plants.

Which of the following is not a mechanical cell organelle:-

Glyoxysomes are specialized peroxisomes found in plants (particularly in the fat storage tissues of germinating seeds) and also in filamentous fungi. Seeds that contain fats and oils include corn, soybean, sunflower, peanut and pumpkin.

Plastids which store fats and oils are called:-

Ribosome biogenesis is the process of making ribosomes. In prokaryotic cells, it takes place in the cytoplasm with the transcription of many ribosome gene operons. In eukaryotes, it takes place both in the cytoplasm and in the nucleolus. It involves the coordinated function of over 200 proteins in the synthesis and processing of the three prokaryotic or four eukaryotic rRNAs, as well as assembly of those rRNAs with the ribosomal proteins.