experienced by the particle in an inertial frame of reference is

is the position vector of the particle with respect to the centre of the disc.

Now consider a smooth slot along a diameter of a disc of radius R rotating counter-clockwise with a constant angular speed ω about its vertical axis through its center. We assign a coordinate system with the origin at the center of the disc, the x-axis along the slot, the y-axis perpendicular to the slot and the z-axis along the rotation axis

and is constrained to move only along the slot.

Q. The distance r of the block at time t is

Force on the block along slat

experienced by the particle in an inertial frame of reference is

is the position vector of the particle with respect to the centre of the disc.

Now consider a smooth slot along a diameter of a disc of radius R rotating counter-clockwise with a constant angular speed ω about its vertical axis through its center. We assign a coordinate system with the origin at the center of the disc, the x-axis along the slot, the y-axis perpendicular to the slot and the z-axis along the rotation axis

and is constrained to move only along the slot.

Q. The net reaction of the disc on the block is

STATEMENT-1 : A cloth covers a table. Some dishes are kept on it. The cloth can be pulled out without dislodging the dishes from the table.
STATEMENT-2 : For every action there is an equal and opposite reaction.

Statement1 : Cloth can be pulled out with out dislodging the dishes from the table because of inertia.
Therefore, statement – 1 is true.
Statement 2 : This is Newton's third law and hence true. But statement 2 is not a correct explanation of statement 1.

STATEMENT-1 : It is easier to pull a heavy object than to push it on a level ground and

STATEMENT-2 : The magnitude of frictional force depends on the nature of the two surfaces in contact.

It is easier to pull a heavy object than to push it on a level ground. Statement-1 is true. This is because the normal reaction in the case of pulling is less as compared by pushing. (f = μ N). Therefore the frictional force is small in case of pulling. statement-2 is true but is not the correct explanation of statement-1.

If a body looses half of its velocity on penetrating 3 cm in a wooden block, then how much will it penetrate more before coming to rest? 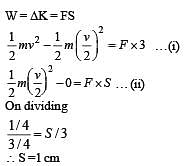 For the man standing in the left, the acceleration of   the ball

For the man standing on the ground, the acceleration of the ball

When forces F1, F2, F3 are acting on a particle of mass m such that F2 and F3 are mutually perpendicular, then the particle remains stationary. If the force F1 is now removed then the acceleration of the particle is

Two forces are such that the sum of their magnitudes is 18 N and their resultant is 12 N which is perpendicular to the smaller force. Then the magnitudes of the forces are

Speeds of two identical cars are u and 4u at the specific instant. The ratio of the respective distances in which the two cars are stopped from that instant is

A light string passing over a smooth light pulley connects two blocks of masses m1 and m2 (vertically). If the acceleration of the system is g/8, then the ratio of the masses is

Adding the equations we get

Three identical blocks of masses m = 2 kg are drawn by a force F = 10.2 N with an acceleration of 0. 6 ms–2 on a frictionless surface, then what is the tension (in N) in the string between the blocks B and C?

One end of a massless rope, which passes over a massless and frictionless pulley P is tied to a hook C while the other end is free. Maximum tension that the rope can bear is 360 N. With what value of maximum safe acceleration (in ms–2) can a man of 60 kg climb on the rope? 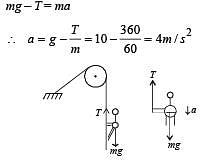 For the bag accelerating down mg – T = ma

These forces are represented in magnitude and direction by the three sides of a triangle  ABC. The particle will now move with velocity

As shown in the figure, the three forces are represented by the sides of a triangle taken in the same order. Therefore the resultant force is zero.

A horizontal force of 10 N is necessary to just  hold a block stationary against a wall. The coefficient of friction between the block and the wall is 0.2. The weight of the block  is

For the block to remain stationary with the wall

A marble block of mass 2 kg lying on ice when given a velocity of 6 m/s is stopped by friction in 10 s. Then the coefficient of  friction is

A block of  mass M is pulled along a horizontal frictionless surface by a rope of mass m. If a force P is applied at the free end of the rope, the force exerted by the rope on the block is

Taking the rope and the block as a system

Taking the block as a system, we get  T = Ma

The Earth pulls the block by a force Mg. The block in turn exerts a force Mg on the spring of spring balance S1 which therefore shows a reading of M kgf.

The spring S1 is massless. Therefore it exerts a force of Mg on the spring of spring balance S2 which shows the reading of M kgf.

A rocket with  a lift-off mass 3.5 × 104 kg is blasted upwards with an initial acceleration of 10m/s2. Then the initial thrust of the blast is

Two masses m1 = 5 kg and m2 = 4.8 kg tied  to a string are hanging over a light frictionless pulley. What is the acceleration of the masses when left free to move ?

A block rests on a rough inclined plane making an angle of 30° with the horizontal. The coefficient of static friction between the block and the plane is 0.8. If the frictional force on the block is 10 N, the mass of the block (in kg) is

A smooth block is released at rest on a 45° incline and then slides a distance ‘d’. The time taken to slide is ‘n’ times as much to slide on rough incline than on a smooth incline.
The coefficient of friction is

A parachutist after bailing out falls 50 m without friction.
Wh en par achute open s, it decelerates at 2 m /s2 . He reaches the ground with a speed of 3 m/s. At what height, did he bail out ?

The velocity of parachutist when parachute opens is

A bullet fired into a fixed target loses half of its velocity after penetrating 3 cm. How much further it will penetrate before coming to rest assuming that it faces constant resistance to motion ?

Let K be the initial kinetic energy and F be the resistive force. Then according to work-energy theorem,

An annular ring with inner and outer radii R1 and R2 is rolling without slipping with a uniform angular speed. The ratio of the forces experienced by the two particles situated on the inner and outer parts of the ring,

According to work-energy theorem, W = ΔK = 0 (Since initial and final speeds are zero)

A block is kept on a frictionless inclined surface with angle of inclination ‘α’ . The incline is given an acceleration ‘a’ to keep the block stationary. Then a  is equal to

For block to remain stationary,

A mass of M kg is suspended by a weightless string. The horizontal force that is required to displace it until the string makes an angle of 45° with the initial vertical direction is

Work done by tension is zero

A ball of mass 0.2 kg is thrown vertically upwards by applying a force by hand. If the hand moves 0.2 m while applying the force and the ball goes upto 2 m height further, find the magnitude of the force. (Consider g = 10 m/s2).

A player caught a cricket ball of mass 150 g moving at a rate of 20 m/s. If the catching process is completed in 0.1s, the force of the blow exerted by the ball on the hand of the player is equal to

A coin is placed on a horizontal platform which undergoes vertical simple harmonic motion of angular frequency w. The amplitude of oscillation is gradually increased. The coin will leave contact with the platform for the first time (a) at the mean position of the platform

For block A to move in SHM.

Now, force acting on the block of mass m is

Two fixed frictionless inclined planes making an angle 30° and 60° with the vertical are shown in the figure. Two blocks A and B are placed on the two planes. What is the relative vertical acceleration of A with respect to B ?

A mass ‘m’ is supported by a massless string wound around a uniform hollow cylinder of mass m and radius R. If the string does not slip on the cylinder, with what acceleration will the mass fall or release?

If the coefficient of friction is 0.5, the maximum height above the ground at which the block can be placed without slipping is:

Given in the figure are two blocks A and B of weight 20 N and 100 N, respectively. These are being pressed against a wall by a force F as shown. If the coefficient of friction between the blocks is 0.1 and between block B and the wall is 0.15, the frictional force applied by the wall on block B is: 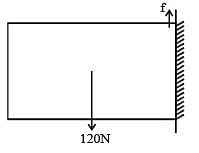 A point particle of mass m, moves long the uniformly rough track PQR as shown in the figure. The coefficient of friction, between the particle and the rough track equals μ. The particle is released, from rest from the point P and it comes to rest at a point R. The energies, lost by the ball, over the parts, PQ and QR, of the track, are equal to each other, and no energy is lost when particle changes direction from PQ to QR.

The value of the coefficient of friction μ and the distance x (= QR), are, respectively close to :