Two masses m1 & m2 are initially at rest and are separated by a very large distance. If the masses approach each other subsequently, due to gravitational attraction between them, their relative velocity of approach at a separation distance of d is

A man of mass m starts falling towards a planet of mass M and radius R. As he reaches near to the surface, he realizes that he will pass through a small hole in the planet. As he enters the hole, he sees that the planet is really made of two pieces a spherical shell of negligible thickness of mass 2M/3 and a point mass M/3 at the centre. Change in the force of gravity experienced by the man is

Gravity does not depend upon shape and size of the celestial body. It depends only on the mass of the two bodies and distance between them.
Fold = GmM/R2 and Fnew = GmM/R2

The escape velocity for a planet is ve. A tunnel is dug along a diameter of the planet and a small body is dropped into it at the surface. When the body reaches the centre of the planet, its speed will be 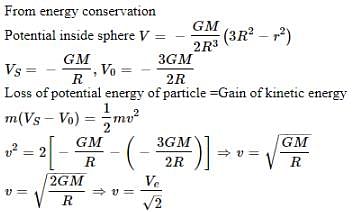 If a tunnel is cut at any orientation through earth, then a ball released from one end will reach the other end in time (neglect earth rotation)

Kinetic energy of the system just after the collision is

The maximum separation between their centres after their first collision

A mass is at the center of a square, with four masses at the corners as shown.

Rank the choices according to the magnitude of the gravitational force on the center mass.

A satellite of mass m, initially at rest on the earth, is launched into a circular orbit at a height equal to the radius of the earth. The minimum energy required is

Applying the conservation of momentum, we get:
V = velocity of 5M, V1 = velocity of 4M, V2 = velocity of M and ATQ V2 = -V
5MV = 4MV1 + M(-V)
6MV = 4MV1
V1 = 3/2 V
Now, Vo = orbital velocity and Ve = escape velocity
Ve = √2 Vo
In a bound orbit the object is gravitationally bound to the body that is the source of gravity (like the Earth is bound to the Sun, or the Moon to the Earth). An unbound orbit is typically hyperbolic, and the object will escape from the source of gravity

If t1 is the time taken by the planet to travel along ACB and t2 the time along BDA, then

If a planet is orbiting the sun then |U|> |K| else it will leave the system because it won’t be under the influence of the sun’s gravity.

Satellites A and B are orbiting around the earth in orbits of ratio R and 4R respectively. The ratio of their areal velocities is

Figure shows the variation of energy with the orbit radius r of a satellite in a circular motion. Select the correct statement.

Two masses m1 and m2 (m1 < m2) are released from rest from a finite distance. They start under their mutual gravitational attraction

The total energy of the system remains constant.

In side a hollow spherical shell

A geostationary satellite is at a height h above the surface of earth. If earth radius is R

When a satellite in a circular orbit around the earth enters the atmospheric region, it encounters small air resistance to its motion. Then

Due to air drag some mechanical energy of satellite will converted into heat energy, there will be loss of ME of satellite, so radius of orbit will decrease and satellite will follow a spiral path towards earth.
If r is decreases,
P.E.=−GMm​/r, P.E. is also decreases.
K.E=GMm​/2r K.E increasing, increased speed in spite of decrease in M.E. But rate of P.E decreases is more than the rate at which M.E decreases.
Angular momentum L=mrv=mr√GM​r=m√GMr​⇒L∝√r​.
So, angular momentum decreases as r decreases.

Communication satellites are supposed to be geostationary in nature. So, from the above properties options B is correct.

As the gravitational force on satellites due to earth acts always towards the centre of earth, thus acceleration of S is always directed towards the centre of the earth.
Also, as there is no external force so according to conservation of energy, total mechanical energy of S is constant always.
Also, as in the absence of external torque L is constant in magnitude and direction.
Thus, mrv=constant ⟹v varies as r changes
Hence, p=mv is not constant.

If a satellite orbits as close to the earth's surface as possible,

For a satellite to orbit around the earth, which of the following must be true ?