Roy wants to make a list of actions that show friction produces heat. Which of the following could he include in his list?
(a) Rubbing hands together
(b) Scratching a match stick against the box
(c) Sawing wood
(d) Drilling a hole into metal sheet
(e) Rubbing off some pencil marks with an eraser

As all these actions involve two surfaces rubbing against each other, thus force of friction comes into action which produces heat.

Select the forces that the women X and Y in the diagram need to overcome to carry their groceries. 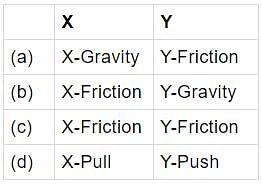 Woman 'X' needs to overcome friction to slide the trolley smoothly. Woman 'Y' needs to hold up the shopping bags against gravity,

Nidhi was asked to draw the shadow of a tumbler formed on the screen behind it, when it is kept in different manners at the same position and light is shone on it from the same direction. She drew three shadows as shown here.

A tumbler or any object may cast differently shaped shadows depending upon the angle of light source and the manner in which the object is kept.

Refer to the given figure and select the correct option.

A torch is shone on a wooden prism and a beach ball as shown below.

What will be the shape of shadow observed on the screen?

The above figures show the force required to move a 100 g object over different surfaces. The friction is greatest at ____.

Friction is a force or resistance offered by a surface to the movement of object in contact. As it is shown, that on surface W, the force required to move an object is maximum, this shows that the opposing force of friction is provided maximum by surface W.

Sandhya made a musical instrument as shown in the figure using large wooden box, a broom handle and a length of string.
She tightened the string by pulling harder on the broom handle. What kind of sound will she hear now?

The girl a is putting more efforts to pull the sack bag as compared to the girl b. Girl a has to work more against a force which also _______.

Wheel cart reduces friction between sack bag and floor making it easier to pull the bag. Friction is present between a surface and object put on it and resists its motion. Friction is the force which prevents us from slipping when we walk.