Test: Even And Odd Integers- 2

Which of the following statements must be true?

I. The product of first 100 prime numbers is even

III. The sum of first five non-negative even numbers is divisible by both 4 and 5

Explanation:- (a) The product of first 100 prime numbers will always be an even number , because it will contain 2 as a factor , since 2 is also a prime number

If x and y are positive integers and x is odd, is xy even?

If n is an integer, then which of the following statements is/are FALSE?

4y will always be even, irrespective of the value of y, because an even number (4 here) multiplied by a number (whether even or odd) always gives an even product

-->  For the sum of 3x4 and 4y to be even, 3x4 must be even. This is because, the only way sum of two numbers can be even is if they are both even or both odd. Here, we have already determined that 4y is even.

This product can be even only if x4 is even

x4 will be even if x is even

Therefore, in order to determine if 3x4 + 4y is even, we only need to find if x is even.

Now, an odd number multiplied with itself any number of times will give an odd product (similar result holds true for even numbers as well)

So, if y raised to the power something (2x in this case) is odd

We do not get to know if x is even or not.

(1) X is the smallest integer that is divisible by all integers from 11 to 15, inclusive.

We need to find if X is even or not

X is the smallest integer that is divisible by all integers from 11 to 15, inclusive

3X is an odd number

We are given that a, b, and k are positive integers. And, we have to find out whether the sum of a and b will be even or odd.

Let us draw a table for all the possible cases for the even-odd property of a and b, and the corresponding property of the sum (a+b):

Thus we see that:
If a and b are both odd or both even, then the sum (a+b) will be even

So, we will need to determine the even-odd property of both a and b in order to be in a position to say whether the sum (a+b) is odd or even.

Similarly, k2 will also be odd

Think of easier numbers of the type of the right hand side of the above equation:

So, a is an odd number

Similarly, k2 will also be even

So, a is an even number

Thus, the value of a can be even or odd, depending on the value of k. This step fails to give us a definite answer whether a is an even number or odd number. Also, it does not give us any information about the values of b.

So, we can’t determine whether the expression a + b will be even or odd.

So, Statement 1 alone is not sufficient to arrive at a unique answer.

Now, the value of b depends on the values of a and k.

If the values of a and k are independent of each other, then, we will have to consider 4 cases for the value of b: 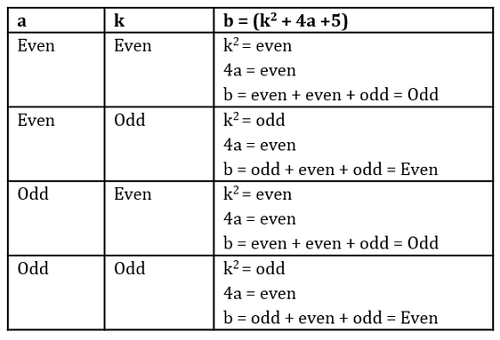 Thus, we see that:

Now, it is possible that the values of k and a are dependent on one another.

For example, if you were given that k = 8a

This would mean that irrespective of whether a is even or odd, k will always be even.

In that case, you would have been able to determine for sure that b will always be odd (though you would still be clueless about whether a is odd or even).

Or, if you were given that a = 8k, you would have been able to determine that a is even no matter what the value of k.

We are not given any information about the relationship, if any, between k and a. Neither are we given any other clue about the even-odd property of a.

Since this statement doesn’t tell us whether:

we will not be able to determine whether the sum (a+b) is even or odd.

So, Statement 2 alone is not sufficient to arrive at a unique answer

Since the individual analysis of the statements does not yield us any significant result, let’s analyse both of them together:

When k is even, b is odd

When k is odd, b is even

Combining the two statements, we get the following table:

Thus, we see that irrespective of the value of k, the sum (a+b) is always odd.

Thus, we have been able to arrive at a unique solution by combining the two statements.

If x and y are integers, is y even?

Step 1 and 2: Understand the question and draw inferences

We are given that x and y are integers, and we are asked if y is even. Since we do not have any more information to draw inferences from, let’s move straight to Statement 1.

Statement 1 holds true for each of these 3 cases. Thus, we cannot ascertain for sure if y is odd or even.

Therefore, Statement 1 alone is not sufficient to answer the question.

So, three possibilities arise for this statement as well:

Statement 2 holds true for each of these 3 cases. Thus, we cannot ascertain for sure if y is odd or even.

Therefore, Statement 2 alone is not sufficient to answer the question.

Step 5: Analyze both statements together (if needed)

Both Statements will be true at the same time only if:

Thus, even after combining both the statements, we have not been able to ascertain the even-odd nature of y.

Thus, both the statements together are not sufficient to answer the question.

We are given that x, y and z are positive integers.

And if y is divisible by 2, this means that y is even.

Thus, the question is indirectly asking us: is y even?

y will be even if the right hand side of Equation 1 is even. So, let’s analyze the condition in which this will be so.

So, in the part (x2 – 4), we are subtracting an even number from an odd number. Think of what happens when we subtract 4 from 9. We get 5, which is an odd number. So, here too, the result of subtracting 4 from x2 will be an Odd number (Please note that the result may be positive or negative. We are not concerned with that. All that we want to know is whether the result will be even or odd)

So, from Equation 1 we get:

Now, irrespective of whether k is even or odd,

So, the analysis of statement (1) tells us that z is an odd number.

Since we have been able to determine that z is an odd number, this means that y is an even number.

Thus, Statement (1) alone is sufficient to answer the question: is y even?

Now, we are given that x is an odd number

Thus, z is an odd number

Thus, Statement 2 alone is sufficient to answer the question: is y even?

Since we got unique answers in step 3 and 4, so this step is not required

If A is a positive integer, then which of the following statements is true?

We are given that A is a positive integer. A may be odd or even.

Step 2: Analyzing the given statements

We don’t even need to consider the case when A is even, because Statement 1 has already been proven FALSE.

Now, an odd number multiplied with itself any number of times will give an odd product

If a, b, c, d, and e are integers and the expression (ab2c2 /d2e) gives a positive even integer, which of the following options must be true?

Also, it is given that

We can also write this expression as:

When you multiply any number, whether it is even or odd, with an even number, the product is always even.

So, we can deduce that:

Also, equation (1) can be written as:

Since the first number (b2c2 /d2) is always positive, the second number (a/e) also needs to be positive.

(Note that, here it is possible that a and e both are negative, but the overall expression (a/e) is definitely positive)

So, we know that a/e is positive.

Now, let’s move on to the analysis of the options:

As we know, the expression (ab2c2) is even and it can be written as:

So, this statement is always true.

We already proved that a/e is positive.

So, this statement is always true.     III. a/d2 is positive

So, we can’t say that this statement is always true.

Hence, the options that are always true are I and II. So, the correct answer choice is choice C.

If r and s are positive integers, and r2 + r/s is an odd integer, which of the following cannot be even?

Given:   r and s are positive integers

To Infer: Let’s try to infer whether r and s are even or odd.

Let’s first consider the possibility that r is odd.

Not possible! When one of the numbers being multiplied is even, the product is always even

Let’s also see if we can determine whether s is even or odd.

We know now that r is even

Conclusion: Both r and s are even integers

Step 2: Analyzing the given options

We don’t need to analyze Option E since we have already found the expression that cannot be even.

Among the given options, Option D cannot be even

Which one of the following is odd?

Which one of the following is even?