ABC is a triangle in which AB = 4 cm and BC = 7cm. What is the possible range of values of CA?

ABC and BDC are two triangles as shown in the given figure. If BDC is an isosceles triangle in which BD = DC. Find the value of ∠BDC. 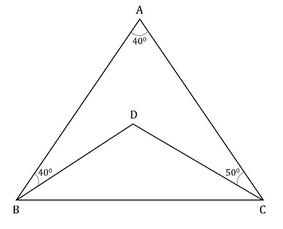 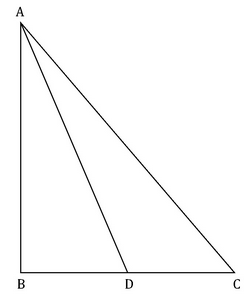 In the given figure, AB = 6cm. Find the area of the triangle ADC. 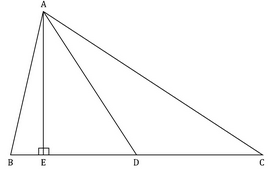 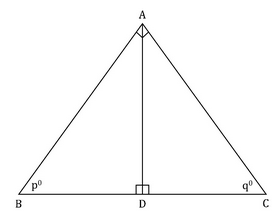 From the given diagram, find the area of triangle ABC. 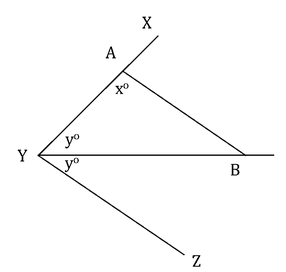 I.  AB is parallel to YZ

For this we need the value of Angle ABY.

Given that AB is parallel to YZ.

Therefore, statement 1 is sufficient to arrive at a unique answer.

Therefore, statement 2 is sufficient to arrive at a unique answer.

Since we arrived at a unique answer in at least one of step 3 and step 4, this step is not necessary. 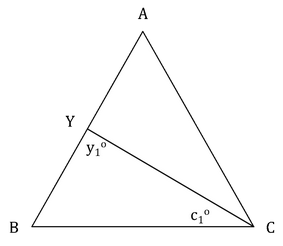 ABC is a triangle and CY is a line segment cutting AB at Y.

We need to find if the statement AB > AC > BC is true or not.

For this we it is enough to get a relation among angles A, B and C since the sides of a triangle follow the same relation as the angles opposite to them.

However, we cannot infer any relationship between BC and AC (or AB and AC) from the given information.

(In other words, BC could be greater than AC or less than AC or equal to AC).

Therefore, statement 1 is not sufficient to arrive at a unique answer.

This leads us to 3 cases as follows:

Therefore, BC cannot be the longest side.

Therefore, statement 2 is not sufficient to arrive at a unique answer.

Combining both the statements, we have:

Both the statements together are sufficient to arrive at a unique answer.

In the figure shown above, point E is the intersection point of the diagnoals AC and BD of rectangle ABCD. Is AB greater than BC?

In the given rectangle ABCD, we need to find if AB > BC, i.e., if the length is greater than the breadth.

Note that AC and BD are the diagonals of the rectangle and E is their point of intersection.

Being opposite sides of a rectangle, AD = BC

Therefore, the above equation becomes:

Thus, we observe that the two diagonals of the rectangle are equal.

As we know that diagonals of a rectangle bisect each other, we can write

(Now, it is also easy to notice that the rectangle is symmetrical about point E.

Therefore, point E will divide each diagonal in half. )

Therefore, we can calculate the value of BC and so we can arrive at a unique answer on whether AB is greater than BC or not.

Statement 1 is sufficient to arrive at a unique answer.

Statement 2 is sufficient to arrive at a unique answer.

We arrived at a unique answer in step 3 and step 4 above. Therefore, this step is not needed. 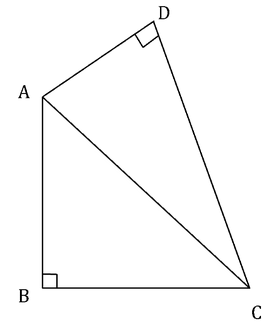 Given a quadrilateral ABCD with right angles at B and D.

Given that Angle CAB = Angle BCA

This doesn’t give us any relation between AD and BC.

So statement 1 is not sufficient to arrive at a unique answer.

In the right angled triangle ABC, we have

Similarly, in the right angled triangle ADC, we have

Given that CD > AB

So for (I) to be true (the equality to hold true), the remaining terms on either sides of LHS and RHS should compensate for the imbalance created by CD2 and AB2.

Therefore, statement 2 is sufficient to arrive at a unique answer.

We arrived at a unique answer in step 4 above. Therefore, this step is not needed.

We have to determine if AC > BC

We know that in a triangle, the side opposite to the bigger angle is longer.

So, the question essentially becomes to determine if x > a

Since corresponding angles are equal,

In the light of this information and the information given in Statements 1 and 2, we need to determine if x > a

We know that in a triangle, the angles opposite to equal sides are equal.

Angle GEF is the exterior angle.

By Exterior Angle Theorem, the exterior angle is equal to the sum of the interior opposite angles. 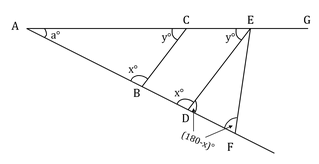 Since, z is the exterior angle of a triangle, it can never be greater than 180°

Thus, Statement 1 alone is sufficient to determine if x  > a

However, this doesn’t give us any clue about whether x > a

Thus, Statement 2 alone is not sufficient to determine if x > a

Since we arrived at a unique answer in step 3 above, this step is not needed.

A right angled triangle, right angled at point B has angles such that a<c<b where a, b, c correspond to the angles at points A, B, C. If the area of the triangle is 2 which of the following inequality indicates the range of values of side BC.

Since it is given that ΔABC is right angled at B, Angle ABC = 90∘

In the extreme case of BC = AB (which is not possible according to the given condition),

However, since BC < AB

BC should be less than 2 and AB should be greater than 2.

Also, since BC is a side of a triangle, it is positive and greater than zero

Combining the above two inequalities, we get:

You know that the equal sides are 2 and the equal angles are 22.5°.

To find the area, you need the base and height.

Rotate the triangle so that CB is the base, and extend the line.

Knowing the hypotenuse of the 45o-45o-90o triangle has a length of 2, call the other two sides y, and use the Pythagorean Theorem to find y:

In the triangle above, what is the measure of Angle YZX?

In triangle WYZ, by applying Angle Sum Property, we get:

Applying this information in Equation 1, we get:

Thus, Statement (1) is sufficient to determine a unique value of Angle YZW.

We don’t know which sides of triangle XYZ are equal.

One possibility is that ZX = XY, and therefore, Angle XYZ = Angle YZX

Another possibility is that ZX = ZY, and therefore Angle XYZ = Angle ZXY

Thus, multiple values of angle YZX are possible from Statement 2.

Statement (2) is not sufficient.

You get a unique answer in Step 3, so this step is not required

Is the perimeter of triangle ABC greater than 6 cm?

(1) One side of triangle ABC measures 3 cm

Let’s say the sides of the triangle are a, b, and c.

Let the perimeter of the triangle be X.

Since we don’t have any other information, let’s move on to the analysis of the statement 1.

Statement 1 says: One side of triangle ABC measures 3 cm.

Now, we know that the sum of two sides of a triangle is always greater than the third side.

So, we can write:

Adding a to both sides of this inequality, we get:

Substituting a = 3 cm in this inequality, we get:

Thus, Statement 1 alone is sufficient to answer the question.

Statement 2 says: The lengths of the three sides of triangle ABC are consecutive integers.

Now, we know that the sum of two sides of a triangle is always greater than the third side.

This means, we can write:

Adding 1 to both sides of this inequality:

Thus, Statement 2 alone is sufficient to determine if X > 6

Step 5: Analyse Both Statements Together (if needed)

Since we got the answer to the question in Steps 3 and 4, we don’t need to perform this step. 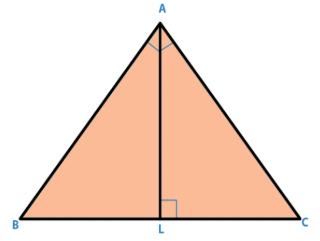 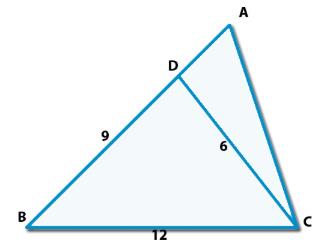 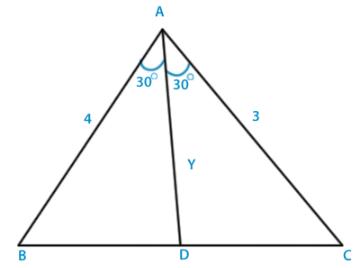 The point of intersection of the altitudes of a triangle is called its: