This quest ion requires us to untangle a series of ratios among the numbers of workers in the various years in order to find the number of workers after the first year. We can solve this problem by setting up a grid to keep track of the information:

We are told initially that after the four-year period, the company has 10,500 employees:

We are then told that the ratio of the number of workers after the third year to the number after the first year is 14 to 1. We can incorporate this into the chart:

Now we are told that the ratio of the number of workers after the third year to that before the period began is 70 to 1. We can incorporate this into the chart as well:

We can find the ratio of r to e by setting the equat ions we have equal to each other. First, though, we must multiply each one by coefficients to make them equal the same value:

Since both equations now equal 120x, we can set them equal to each other and simplify: 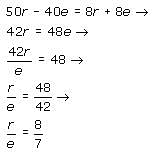 We can find a ratio between the rates of increase and decrease for the corn and wheat:

To get rid of the radical sign in the denominator, we can multiply top and bottom by 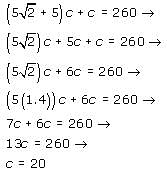 Notice that the radical 2 was replaced with its approximate numerical value of 1.4 because the quest ion asks for the approximate price. We need not be exact in this particular instance.
If c = 20, we know that the price of a peck of wheat had decreased by 20 cents when it reached the same level as the increased price of a bushel o f corn. Since the original price of a peck of wheat was $5.80, its decreased price is $5.80 - $0.20 = $5.60. (By the same token, since c = 20, the price of a bushel of corn had increased by

In order to realize a profit, the company's revenue must be higher than the company's costs. We can express this as an inequality using the information from the question:

If we distribute and move all terms to one side, we get:

We can factor this result:

Since 2 is positive, we know that values of p greater than 4 will not make the inequality true and thus will not yield a profit.
If we try p = 2, we get:

Since 2 is positive, we know that the values of p less than 3 will not make the inequality true and thus will not yield a profit.
If we try p = 3.5, we get:

Since -.25 is negative, we know that values between 3 and 4 will make the inequality true and will thus yield a profit. Since p can be any positive value less than 100 (we cannot have a negative price or a price of zero dollars), there are 100 possible intervals between consecutive integer values of p. The interval 3 < p < 4 is just one. Therefore, the probability that the comp any will realize a profit is 1/100 and the probability that it will NOT realize a profit is 1 - 1/100 or 99/100.

What about the other dates in June?
If the chosen day is any other date, the denominator (of the fraction that makes up the average daily deposit) will contain prime factors other than 2 and/or 5 (such as 3 or 7). Recall that the numerator (of the fraction that makes up the average daily deposit) is defined as a prime integer greater than 100 (such as 101).
Thus, the denominator will be composed of at least one prime factor (other than 2 and/or 5) that is not a factor of the numerator. Therefore, when the division takes place, it will result in an infinite decimal. (To understand this principle in greater detail read the explanatory note that follows this solution.) Therefore, of the 30 days in June, only 9 (June 1, 2, 4, 5, 8, 10, 16, 20, and 25) will produce an average daily
deposit that contains fewer than 5 decimal places:

Explanatory Note: Why will an infinite decimal result whenever a numerator is divided by a denominator composed of prime factors (other than 2 and/or 5) that are not factors of the numerator?
Consider division as a process that ends when a remainder of 0 is reached.
Let's look at 1 (the numerator) divided by 7 (the denominator), for example. If you divide 1 by 7 on your calculator, you will see that it equals .1428... This decimal will go on infinitely because 7 will never divide evenly into the remainder. That is, a remainder of 0 will never be reached.

So 23/5 = 4.6. When the first remainder is divided by 5, the division will end because the first remainder (3) is treated as if it were a multiple of 10 to facilitate the division and 5 divides evenly into multiples of 10.
By the same token, the remainder when an odd number is divided by 2 is always 1, which is treated as if it were 10 to facilitate the division. 10 divided by 2 is 5 (hence the .5) with no remainder.
When dividing by primes that are not factors of 10 (e.g., 3, 7, 11, etc.), however, the process continues infinitely because the remainders will always be treated as if they were multiples of 10 but the primes cannot divide cleanly into 10, thus creating an endless series of remainders to be divided.
If the divisor contains 2's and/or 5's in addition to other prime factors, the infinite decimal created by the other prime factors will be divided by the 2's and/or 5's but will still be infinite.

We can now solve these equations for r and b using substitution:

Substituting back in, we can find b:

So, we can rewrite the original function and plug in t = 4 to find our answer:

A Trussian's weight, in keils, can be calculated by taking the square root of his age in years. A Trussian teenager now weighs three keils less than he will seventeen years after he is twice as old as he is now. How old is he now?

We are told that the Trussian's current weight, √a is three keils less than his future weight,

We can solve the equation as follows: 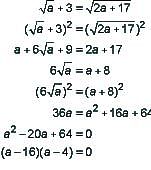 Jim went to the bakery to buy donuts for his office mates. He chose a quantity of similar donuts, for which he was charged a total of $15. As the donuts were being boxed, Jim noticed that a few of them were slightly  ragged-looking so he complained to the clerk. The clerk immediately apologized and then gave Jim 3 extra donuts for free to make up for the damaged goods. As Jim left the shop, he realized that due to the addition of the 3 free donuts, the effective price of the donuts was reduced by $2 per dozen. How many donuts did Jim receive in the end?

We can now solve for x as follows: 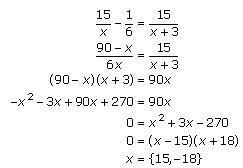