He "turned a deaf ear to" my request.

What does the underlined phrasal verb mean?

Choose the most appropriate set of words from the options given below to complete the following sentence.

Today, we consider Ashoka as a great ruler because of the copious evidence he left behind in the form of stone carved edicts. Historians tend to correlate greatness of a king at his time with the availability of evidence today.

Which of the following can be logically inferred from the above sentences?

Fact 1: Humans are mammals. Fact 2: Some humans are engineers. Fact 3: Engineers build houses. If the above statements are facts, which of the following can be logically inferred?

I. All mammals build houses.
II. Engineers are mammals.
III. Some humans are not engineers.

A square pyramid has a base perimeter x, and the slant height is half of the perimeter. What is the lateral surface area of the pyramid?

Ananth takes 6 hours and Bharath takes 4 hours to read a book. Both started reading copies of the book at the same time. After how many hours is the number of pages to be read by Ananth, twice that to be read by Bharath? Assume Ananth and Bharath read all the pages with constant pace.

For the transformation shown below, if one of the eigenvalues is 6, the other eigenvalue of the matrix is ______

The solution of the differential equation

The first law of thermodynamics can be stated as

In a typical Ellingham diagram for the oxides, the C + O2 = CO2 line is nearly horizontal because

Activation energy of a chemical reaction, homogeneous or heterogeneous, is graphically estimated from a plot between

[where, k is the rate constant and T is the absolute temperature]

The passive film in stainless steel forms above the

During the roasting of a sulfide ore of a metal M, the possible solid phases are M, MS, MO and MSO4. Assuming that both SO2 and O2 are always present in the roaster, the solid phases that can co-exist at thermodynamic equilibrium are

b) Thiobacillus ferrooxidans is a gram-negative, highly acidophilic (pH 1.5 to 2.0), autotrophic bacterium that obtains its energy through the oxidation of ferrous iron or reduced inorganic sulfur compounds.

c) A hydrocyclone is a classifier that has two exits on the axis: one on the bottom (underflow or reject) and one at the top (overflow or accept). The underflow is generally the denser or coarser fraction, while the overflow is the lighter or finer fraction.

d) During an anode effect the normal reactions that produce aluminum are interrupted and other electrochemical reactions take place with the formations of gases CO, CF4 and C2F6. These gases forms bubbles that adhere to the anode bottom, creating an electrical insulating layer which is the reason why the voltage of the cell increases up to 10 – 50 volts and even more. The maximum voltage reached during the anode effects depends also by the bath level. With high bath levels the maximum voltage reached is lower because some fraction of the line current passes through the sides of the anodes, free from the adhering bubbles.

A sub-lance is used to monitor composition and temperature in

The chemical formula of wüstite is

For an ideal hexagonal-closed packed structure, the c/a ratio and packing efficiency respectively are

A schematic of X-ray diffraction pattern of a single phase cubic polycrystal is given below. The miller indices of peak A is

Which of the following cooling curves (shown in schematic) in an eutectoid steel will produce 50% bainitic structure? 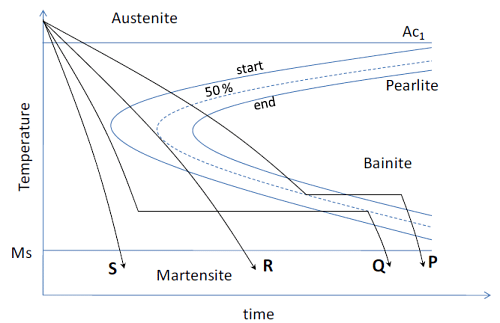 For the tensile stress-strain curve of a material shown in the schematic, the resilience (in MPa) is _________ 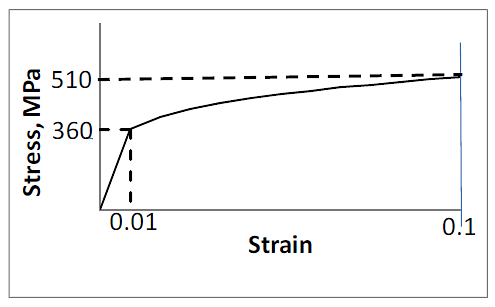 Creep resistance decreases due to

The operation NOT associated with casting is

Of the following welding processes

the width of the heat-affected zone in decreasing order is

A hot body cools according to the following equation

where, T is the instantaneous temperature at time t, and the constant c = 0.05 s-1. Reduce the differential equation into its finite difference form using forward difference. For maintaining numerical stability, the maximum value of the time step Δt (in seconds) is ________

Solve the equation x= e-x using Newton-Raphson method. Starting with an initial guess value x0 = 0, the value of x after the first iteration is ____________

A coin is tossed three times. It is known that out of the three tosses, one is a HEAD. The probability of the other two tosses also being HEADs is _____________

The value of the integral

The grain sizes (in μm) measured at five locations in an alloy sample are: 16, 14, 18, 15 and 13. The mean, median and standard deviation of grain sizes respectively are (in μm)

The change of standard state from pure liquid to 1 wt.% for Si dissolved in liquid Fe at 1873 K is expressed as

Given that the activity coefficient of Si at infinite dilution in Fe is 10-3, the standard Gibbs free energy change (in kJ) for this equilibrium is_____________

The lining of a box-type furnace is made up of a refractory layer and steel plate as shown in the figure. Steady state temperature at the surface of the refractory is 1273 K and that at the outer steel surface is 473 K. If the steady-state heat flux through the refractory-steel plate composite is 1600 W.m-2, and heat flow is along x-direction, the thermal contact resistance (W-1.m2.K) between refractory and steel is _____________ 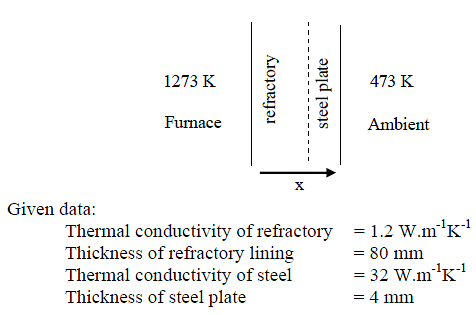 The height of a liquid metal column in a cylindrical vessel is 3.2 m. At time t=0, liquid metal is drained out from the vessel through a small nozzle located at the base of the vessel. Neglecting frictional losses, the initial mass flow rate (in kg.s-1) through the nozzle is ________________

Match entities listed in Column I with their correct dimensions given in Column II:

In vacuum degassing of steel, 14 ppm of dissolved nitrogen is in equilibrium with 1 mbar of nitrogen gas at 1873 K. At the same temperature, if the pressure is lowered to 0.7 mbar, the equilibrium nitrogen content (in ppm) is _____________

Zinc oxide is reduced at a constant temperature in a closed reactor using ZnO(s) and C(s) as the only starting materials. The following reactions are assumed to be at thermodynamic equilibrium:

Assume ideal gas behaviour. Based on mole balance, the relationship applicable to the system at equilibrium is

A simplified energy band-diagram of an intrinsic semiconductor at thermal equilibrium (300 K) is shown. In the accompanying table, which one of the four columns correctly represents the listed parameters? Assume same effective mass for electrons and holes. 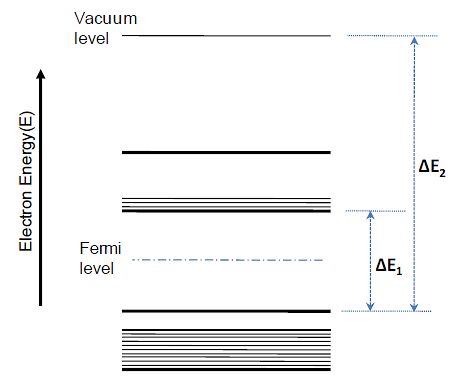 A binary phase diagram is shown in the schematic. 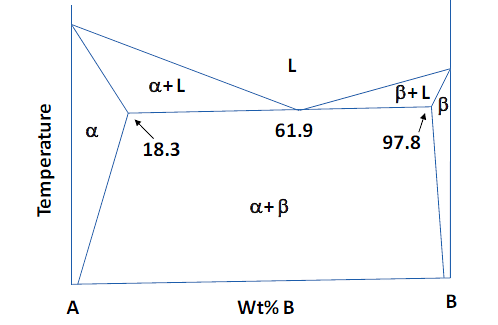 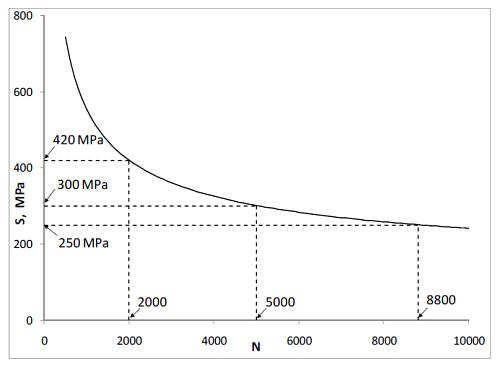 A glass plate has two parallel cracks. One of them is an internal crack of length 5 μm and the other is a surface crack of length 3 μm. A tensile stress is applied perpendicular to the crack surfaces. The fracture stress (in MPa) is ___________

For a polymer reinforced with 40 vol.% glass fiber, the elastic modulus (in GPa) along the transverse direction is

For casting a cylindrical aluminum bloom having a length of 1000 mm and diameter of 750 mm, the approximate solidification time (in minutes) estimated using Chvorinov’s rule is

A liquid phase sintered SiC-Ni composite has a solid-solid grain boundary energy (γSiC-SiC) of 0.80 J.m-2 and a solid-liquid (γSiC-Ni) interfacial energy of 0.45 J.m-2. For a SiC grain size of 20 μm, the average interparticle (SiC-SiC) neck size (in μm) is: