A student measures the time period of 100 oscillations of a simple pendulum four times. The data set is 90 s, 91 s, 95 s and 92 s. If the minimum division in the measuring clock is 1 s, then the reported mean time should be :

A particle of mass m is moving along the side of a square of side ‘a’, with a uniform speed v in the x-y plane as shown in the figure :

Which of the following statements is false for the angular momentum L about the origin?

Along CD, ⊥ distance from line of motion =

Hence (2) is incorrect.
In option (4) the direction of

A point particle of mass m, moves along the uniformly rough track PQR as shown in the figure. The coefficient of friction, between the particle and the rough track equals m. The particle is released, from rest, from the point P and it comes to rest at a point R. The energies, lost by the ball, over the parts, PQ and QR, of the track, are equal to each other, and no energy is lost when particle changes direction from PQ to QR.
The values of the coefficient of friction m and the distance x (= QR), are, respectively close to :

From work energy theorem and given condition

A person trying to lose weight by burning fat lifts a mass of 10 kg upto a height of 1 m 1000 times. Assume that the potential energy lost each time he lowers the mass is dissipated. How much fat will he use up considering the work done only when the weight is lifted up? Fat supplies 3.8 x 107 J of energy per kg which is converted to mechanical energy with a 20% efficiency rate. Take g = 9.8 ms-2 :

A roller is made by joining together two cones at their vertices O. It is kept on two rails AB and CD which are placed asymmetrically (see figure), with its axis perpendicular to CD and its centre O at the centre of line joining AB and CD (see figure). It is given a light push so that it starts rolling with its centre O moving parallel to CD in the direction shown. As it moves, the roller will tend to:

If we take ‘r’ as the distance of IAOR from the axis of rotation, then ‘r’ decreases on left side as the object moves forward.
So, for left v = ωr' < ωr (for right point)
So, the roller will turn to the left as it moves forward.

A satellite is revolving in a circular orbit at a height ‘h’ from the earth’s surface (radius of earth R; h <<R). The minimum increase in its orbital velocity required, so that the satellite could escape from the earth’s gravitational field, is close to : (Neglect the effect of atmosphere). 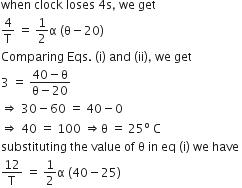 An ideal gas undergoes a quasi static, reversible process in which its molar heat capacity Cremains constant. If during this process the relation of pressure P and volume V is given by PVn = constant, then n is given by (Here CP and CV are molar specific heat at constant pressure and constant volume, respectively) :

‘n’ moles of an ideal gas undergoes a process A → B as shown in the figure. The maximum temperature of the gas during the process will be : 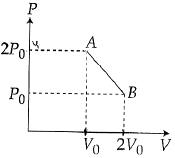 A particle performs simple harmonic motion with amplitude A. Its speed is trebled at the instant that it is at a distance 2A/3 from equilibrium position. The new amplitude of the motion is :

A uniform string of length 20 m is suspended from a rigid support. A short wave pulse in introduced at its lowest end. It starts moving up the string. The time taken to reach the support is:
(take g = 10 ms-2)

The region between two concentric spheres of radii ‘a’ and ‘b’, respectively (see figure), has volume charge density ρ = A/r, where A is a constant and r is the distance from the centre. At the centre of the spheres is a point charge Q. The value of A such that the electric field in the region between the spheres will be constant, is :

Charge in the shaded region =

A combination of capacitors is set up as shown in the figure. The magnitude of the electric field due to a point charge Q (having a charge equal to the sum of the charges on the 4 μF and 9 μF capacitors), at a point distant 30 m from it, would equal:

Two identical wires A and B, each of length

‘’, carry the same current I. Wire A is bent into a circle of radius R and wire B is bent to form a square of side ‘a’. If BA and BB are the values of magnetic field at the centres of the circle and square respectively, then the ratio BA / BB is:

Hysteresis loops for two magnetic materials A and B are given below :
These materials are used to make magnets for electric generators, transformer core and electromagnet core.
Then it is proper to use : 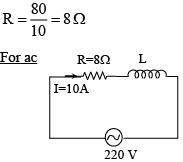 Arrange the following electromagnetic radiations per quantum in the order of increasing energy :
A : Blue light
B : Yellow light
C : X-ray
D : Radiowave

An observer looks at a distant tree of height 10 m with a telescope of magnifying power of 20. To the observer the tree appears :

The box of a pin hole camera, of length L, has a hole of radius a. It is assumed that when the hole is illuminated by a parallel beam of light of wavelength λ the spread of the spot (obtained on the opposite wall of the camera) is the sum of its geometrical spread and the spread due to diffraction. The spot would then have its minimum size (say bmin) when :

Half-lives of two radioactive elements A and B are 20 minutes and 40 minutes, respectively. Initially, the samples have equal number of nuclei. After 80 minutes, the ratio of decayed numbers of A and B nuclei will be :

If a, b, c, d are inputs to a gate and x is its output, then, as per the following time graph, the gate is : 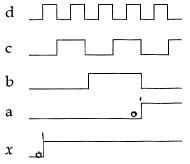 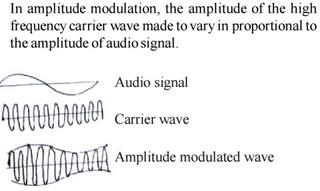 In an experiment for determination of refractive index of glass of a prism by i - δ, plot, it was found that a ray incident at angle 35°, suffers a deviation of 40° and that it emerges at angle 79°. In that case which of the following is closest to the maximum possible value of the refractive index?

Identify the semiconductor devices whose characteristics are given below, in the order (a), (b), (c), (d):

Graph (a) is for a simple diode.
Graph(b) is showing the V Break down used for zener diode.
Graph (c) is for solar cell which shows cut-off voltage and open circuit current
Graph (d) shows the variation of resistance h and hence current with intensity of light.

For a common emitter configuration, if a and b have their usual meanings, the incorrect relationship between a and b is: 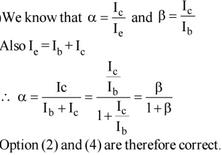 At 300 K and 1 atm, 15 mL of a gaseous hydrocarbon requires 375 mL air containing 20% O2 by volume for complete combustion. After combustion the gases occupy 330 mL. Assuming that the water formed is in liquid form and the volumes were measured at the same temperature and pressure, the formula of the hydrocarbon is:

Two closed bulbs of equal volume (V) containing an ideal gas initially at pressure pi and temperature T1 are connected through a narrow tube of negligible volume as shown in the figure below. The temperature of one of the bulbs is then raised to T2. The final pressure pf is : 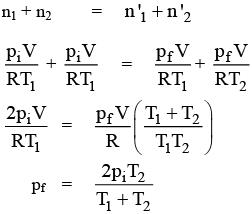 A stream of electrons from a heated filament was passed between two charged plates kept at a potential difference V esu. If e and m are charge and mass of an electron, respectively, then the value of h/l (where l is wavelength associated with electron wave) is given by :

The species in which the N atom is in a state of sp hybridization is :

The equilibrium constant at 298 K for a reaction A + B

Galvanization is applying a coating of :

Galvanization is applying a coating of zinc. 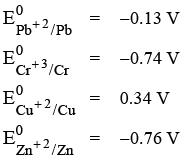 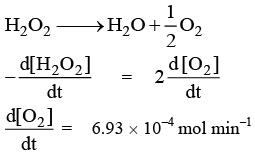 For a linear plot of log (x/m) versus log p in a Freundlich adsorption isotherm, which of the following statements is correct ? (k and n are constants)

Which of the following atoms has the highest first ionization energy ?

Which one of the following ores is best concentrated by froth floatation method ?

Which one of the following statements about water is FALSE ?

The main oxides formed on combustion of Li, Na and K in excess of air are, respectively :

The reaction of zinc with dilute and concentrated nitric acid, respectively produces :

The pair in which phosphorous atoms have a formal oxidation state of + 3 is :

Which of the following compounds is metallic and ferromagnetic ?

CrO2 is metallic and ferromagnetic in nature.

Which one of the following complexes shows optical isomerism? 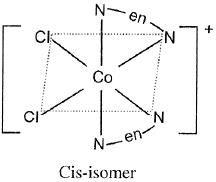 The concentration of fluoride, lead, nitrate and iron in a water sample from an underground lake was found to be 1000 ppb, 40 ppb, 100 ppm and 0.2 ppm, respectively. This water is unsuitable for drinking due to high concentration of :

The distillation technique most suited for separating glycerol from spent-lye in the soap industry is :

Glycerol and spent-lye can be separated by distillation under reduced pressure.

The product of the reaction given below is :

The absolute configuration of

The reaction of propene with HOCl (Cl2 + H2O) proceeds through the intermediate:

In the Hofmann bromamide degradation reaction, the number of moles of NaOH and Br2 used per mole of amine produced are :

Which of the following statements about low density polythene is FALSE ?

Thiol group is present in :

Which of the following is an anionic detergent ?

​The hottest region of Bunsen flame shown in the figure below is : 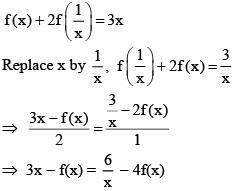 A value of θ for which

is purely imaginary, is:

To be purely imaginary if

The sum of all real values of x satisfying the equation 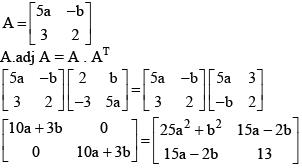 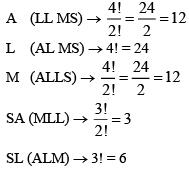 ​If the sum of the first ten terms of the series

If the number of terms in the expansion of

then loge p is equal to: 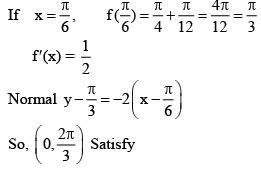 A wire of length 2 units is cut into two parts which are bent respectively to form a square of side = x units and a circle of radius = r units. If the sum of the areas of the square and the circle so formed is minimum, then: 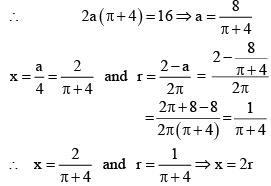 dx is equal to:

Dividing numerator and denominator by x15 we get, 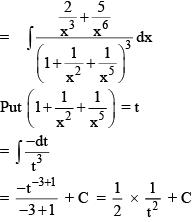 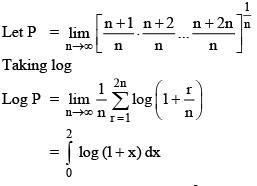 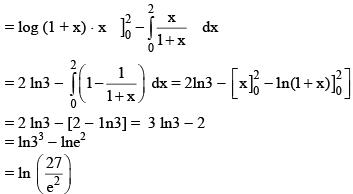 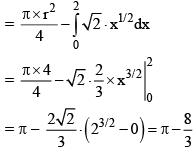 We have to find 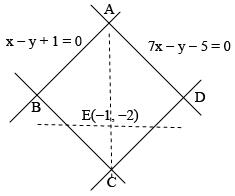 The eccentricity of the hyperbola whose length of the latus rectum is equal to 8 and the length of its conjugate axis is equal to half the distance between its foci, is:

and we know that

be three unit vectors such that

is not parallel to c , then the angle between 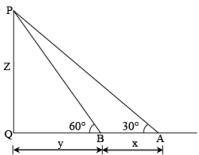