A man getting down a running bus, falls forward because-

You are on a friction less horizontal plane. How can you get off if no horizontal force is exerted by pushing against the surface ?

Spitting or sneezing this is because you can not jump forward or backward or rolling or even run on the frictionless plane. So you have to throw anything out of your body by applying force Newton's third law follows here and you will escape out.

The forces acting on an object are shown in the fig. If the body moves horizontally at a constant speed of 5 m/s, then the values of the forces P and S are, respectively-

A boy of mass 50 Kg running at 5 m/s jumps on to a 20Kg trolley travelling in the same direction at 1.5 m/s. What is the common velocity?

Since no external force, law of conservation of momentum can be applied
Initial Momentum

Find the velocity of the hanging block if the velocities of the free ends of the rope are as indicated in the figure. At a given instant, A is moving with velocity of 5 m/s upwards. What is velocity of B at the time solving above equations will give us

A cyclist of mass 30 kg exerts a force of 250 N to move his cycle. acceleration is 4 ms−2. force of friction between road and tyres will be

In the arrangement shown in fig. the ends P and Q of an unstretchable string move downwards with uniform speed U. Pulleys A and B are fixed. Mass M moves upwards with a speed.

Let say end b has some velocity v in horizontal direction. Thus by constraint motion we get the component of velocities along the rod of both the ends must be equal thus we get,
u.cos (90-q) = v.cos q
Thus we get v = u.tan q

A cyclist of mass 30 kg exerts a force of 250 N to move his cycle. The acceleration is 4 ms−2. The force of friction between the road and tyres will be

Find out the reading of the weighing machine in the following cases.

A mass M is suspended by a rope from a rigid support at A as shown in figure. Another rope is tied at the end B, and it is pulled horizontally with a force F. If the rope AB makes an angle q with the vertical in equilibrium, then the tension in the string AB is :

Three blocks A, B and C are suspended as shown in the figure. Mass of each blocks A and C is m. If system is in equilibrium and mass of B is M, then : 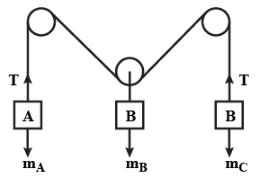 A weight can be hung in any of the following four ways by string of same type. In which case is the string most likely to break ?

A force-time graph for a linear motion is shown in figure where the segments are circular. The linear momentum gained between zero and 8 seconds in -

Momentum is rate of change of force according to the given graph initial and final forces are same ie, no change in force therefore b/w 0 and 8 seconds linear momentum is 0.

A particle moves in the xy plane under the action of a force F such that the value of its linear momentum (P) at any time t is, Px = 2 cost, Py = 2 sint. The angle q between P and F at that time t will be - 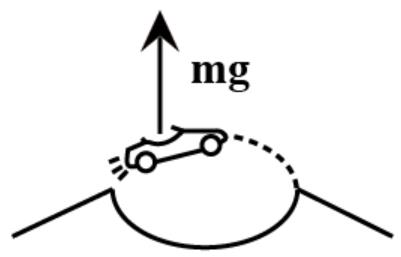 A particle of mass 50 gram moves on a straight line. The variation of speed with time is shown in figure. find the force acting on the particle at t = 2, 4 and 6 seconds.

Two blocks are in contact on a frictionless table. One has mass m and the other 2m. A force F is applied on 2m as shown in the figure. Now the same force F is applied from the right on m. In the two cases respectively, the ratio force of contact between the two block will be :

When you are given one upward and one downward force on a rope of some mass, and you have to find the tension at the mid- point, then you can simply average the 2 forces. So, the correct answer is (100+70)/3 = 85N

A particle of small mass m is joined to a very heavy body by a light string passing over a light pulley. Both bodies are free to move. The total downward force in the pulley is

The heavy body will fall due to accelaration due to gravity.The accelaration of the lighter body wil be 'g' in upward direction.Taking the equlibrium of the small body

reation at the pulley

Two masses M1 and M2 are attached to the ends of a light string which passes over a massless pulley attached to the top of a double inclined smooth plane of angles of inclination a and b. The tension in the string is:

Two masses are hanging vertically over frictionless pulley. The acceleration of the two masses is- Three equal weights A, B, C of mass 2 kg each are hanging on a string passing over a fixed frictionless pulley as shown in the fig. The tension in the string connecting weights B and C is-

In the arrangement shown in figure, pulleys are massless and frictionless and threads are inextensible. The Block of mass m1 will remain at rest, if

A block is placed on a rough floor and a horizontal force F is applied on it. The force of friction f by the floor on the block is measured for different values of F and a graph is plotted between them- For a small value of the applied force the force of friction f increases linearly upto the limiting friction. When it crosses the maximum point of static friction then the friction force due to kinetic friction does not change any more.