2n=16 is in a primary spermatocyte which is in metaphase of first meiotic division. What shall be the total number of chromatids in each of the secondary spermatocyte?

Secondary spermatocyte contains half the number of chromosomes i.e., 8. Each chromosome has 2 chromatids, therefore, 8 chromosomes will have 16 chromatids in all.

The second maturation division of the mammalian ovum occurs

During oogenesis, primary oocyte grows and completes- meiosis I (first maturation division) producing a large secondary oocyte and a small polar body. The secondary oocyte proceeds with meiosis II (second maturation division) but the division gets arrested at metaphase stage. It is in this stage of oocyte that the ovum is shed during ovulation. It passes into oviduct, where the cell cycle resumes only after the entry of sperm.

In humans, at the end end of the first meoitic division, the male germ cells differentiate into the

Which of the following options is correct?

Consider the following statements each with two blanks.
(A) Seminiferous tubules produce (i) while Leydig's cells produce (ii).
(B) In females, urethra is small and conducts (iii) while in males it conducts urine and (iv).
(C) The process of formation of spermatozoa from spermatogonia is called (v) and the process of maturation of spermatids into spermatozoa is called (vi).
Which one of the following options, gives the correct fill ups for the respective blank numbers from (i) to (vi) in the statements?

Given below is an incomplete flow chart showing influence of hormones on gametogenesis in human females. Study it carefully and identify A, B, C and D. 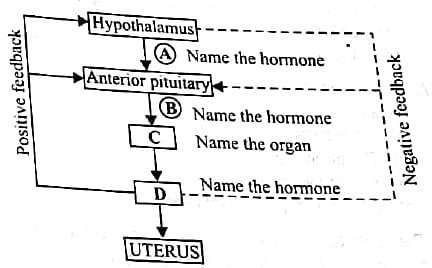 The axial filament in the tail of human sperm has 9+2 microtubular arrangement like that of flagella and cilia.

In the head of the epididymis, the sperms undergo physiological maturation, acquiring increased motility and fertilizing capacity.

Which one is released from the ovary?

Female gamete is released from the ovary in the secondary oocyte stage by rupturing the wall of the ovary.

At what stage of life is oogenesis initiated in a humanfemale?

Oogenesis is the process of formation of functional haploid ova from the diploid germinal cells in the ovary. Oogenesis begins during embryonic development but is completed only at puberty of the secondary oocyte with the sperm.

The given table shows differences between spermato genesis and spermiogenesis. Select the incorrect option.

In human females, certain cells in the germinal epithelium divide by mitosis to produce a large number of oogonia (diploid). The oogonia multiply by mitotic divisions to form primary oocytes (diploid). Each primary oocyte undergoes two maturation divisions. In the first meiotic division the primary oocyte divides into two very unequal haploid daughter cells- a large secondary oocyte and a small first polar body. In the second maturation division (mitotic), the first polar body may divide to form two second polar bodies and the secondary oocyte divides to form two unequal daughter cells, a large ootid and a small polar body. The ootid grows into a haploid ovum. Thus, from one oogonium, one ovum and three polar bodies are formed.

So, the correct answer is 'One functional egg and three polar bodies'.

The middle piece of the sperm contains

The middle piece of sperm contains mitochondria coiled around the axial filament. They provide energy for the movement of the sperm.

Immediately after ovulation, the mammalian egg is covered by a membrane known as

Immediately after ovulation, the layer that forms around the ovum is called corona radiata. It is formed by the granulosa cells of cumulus oophorus. Corona radiata probably increases the likelihood that the ovum will be picked up in the uterine tube.

The middle piece is the tubular structure in which mitochondria are spirally arranged and it also has the beginning part of the flagellum. The sperm tail or the flagellum is based upon unique 9+2 arrangement

Spermatogenesis is induced by

FSH acts on the Sertoli cells and stimulate secretion of some factors which help in the process of spermatogenesis.

How many sperms are formed from 4 primary spermatocytes?

Which of the following contains the actual genetic part of a sperm?

Head of the sperm is anterior, broad, flattened and oval structure. It consists of two parts, posterior large nucleus and anterior small cap-like acrosome. The nucleus consists of condensed DNA and basic proteins.

Acrosome is a type of

Acrosome, a cap like structure present at the tip of the sperm, is a lysosome like organelle derived from Golgi apparatus. It contains a variety of digestive enzymes that break the egg membrane during penetration of the sperm into the egg.