The primary air pollutant, which is formed due to incomplete combustion of organic matter, is

A rainfall is generally classified as acidic, if its pH is less than or equal to.

The acidity in rain water is caused due to the formation of secondary pollutants, like H2S04, HNO3, HCI, etc., due to the reaction of water vapour with SO2, NOx, and HCI gas. It has been certified that when the pH of the rain water falls to 5.6 or below, the rain is specifically termed as acidic.

The most significant primary gaseous pollutant, found in vehicular emissions, is

Match List-l with List-lI and select the correct answer using the codes given below the lists:

Carbon monoxide affect human aerobic metabolism by forming carboxy-haemogiobin (CoHb).
Oxides of nitrogen (NOx) includes - nitric oxide (NO), nitrogen dioxide (NO2), nitrous Oxide (N2O), nitrogen sesquioxide (N2O3), Nitrogen tetroxide (N2O4) and nitrogen pentoxide (N2O5). NO and NO2 are of primary concern as air pollutants. NO2 plays major role in the production of secondary air pollutant ozone (O3).
SO2 is responsible for acid rains as it combines with water vapour to form secondary pollutants like H2SO4 which cause acidity.

The atmosphere extends upto a height of 10,000 km. It is divided into the following four thermal layers:
1. Mesosphere
2. Stratosphere
3. Thermosphere
4. Troposphere
The correct sequence of these starting from the surface of the earth upwards is

Match List-I (Equipment) with List-lI (Pollutants removed) and select the correct answer using the codes given below the lists:

(i) Electrostatic precipitator (High voltage) is used for > 1 mm but can collect submicron particles also.
(ii) Cyclone collector (based on centrifugal force) is used for 5 to 25 μm size particle
(iii) Wet scrubber are used for gaseous pollutants

(iv) Adsorbers are specific to gases. A reactive liquid adsorbent (water or limestone) may be used to remove SO2 from flue gases.

Two sources generate noise levels of 90 dB and 94 dB respectively. The cumulative effect of these two noise levels on the human ear is

The cumulative effect of these two noise levels will be between 90 dB and 94 dB.

Which one of the following plume behaviours occurs when atmospheric inversion begins from the ground level and continues?

1. When the ambient lapse rate is super - adiabatic (greater than the adiabatic), the turbulence of the air itself causes the atmosphere to serve as an effective vehicle of dispersion. As indicated in fig-a, the resultant plume is designated as a looping plume.
2. When the ambient lapse rate is equal to or very near the dry adiabatic lapse rate, the plume issuing from a single chimney or smokestack tends to rise directly into the atmosphere until it reaches air of density similar to that of the plume itself. This type emission, called a neutral plume, is seen in fig-b.
3. When the ambient lapse rate is sub-adiabatic (less than the dry adiabatic), the atmosphere is slightly stable. Under such conditions, there is limited vertical mixing, and the probability of air pollution problems in the area is increased. The typical plume in such a situation is said to be coning.
4. When the lapse rate is negative, as in the ' presence of an inversion, the dispersion of stack gas is minimal, because of lack of. turbulence. In the extremely stable air, a plume spreads horizontally, with little vertical mixing, and is said to be fanning (fig-d).
5. When the lapse rate is super-adiabatic above the emission source and inversion conditions, exist below the source, the plume is said to be lofting. As shown in fig-e, a lofting plume' has minimal downward mixing, and the pollutants are dispersed downwind without any significant ground-level concentrations.
6. When an inversion layer occurs at a short distance above the top of the stack and super adiabatic conditions prevail below the stack, then plume is said to be fumigating (fig-d).
7. When inversion layer exists above the emission source, as well as below the source, then naturally, the emitted plume will neither go up, nor will it go down and would remain confined between the two inversion (fig-g). Such a plume is called a trapping. 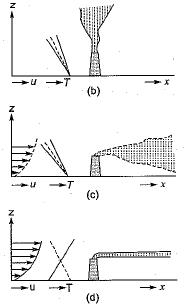