Match the List – I (Boring methods) with List-II (Field conditions) and select the correct answer using the codes given below the lists:

Percussion boring can be employed in most types of soil, including those containing cobbles and boulders. However, there is generally some disturbance of the soil below the bottom of the borehole, from which samples are taken, and it is extremely difficult to detect thin soil layers and minor geological features with this method.

The advantage of rotary drilling in soils is that progress is much faster than with other investigation methods and disturbance of the soil below the borehole is slight. Also typical core diameters are 41, 54 and 76 mm, but can range up to 165 mm.

Wash boring can be used in most types of soil and below water table but progress becomes slow if particles of coarse gravel size and larger are present.

The test boring using augers can be used for soil exploration work for highways and small structures. Information regarding the types of soil present at various depths is obtained by noting the soil that holds to the auger. The soil samples collected in this manner are disturbed, but they can be used to conduct laboratory tests such as grain size determination and Atterberg limits.

Consider the following statements if soil is treated with lime.

Which of the statements given above are correct?

When clayey soils with high plasticity are treated with lime, the plasticity index is decreased. The fine clay particles get flocculated and indicate a different grain size distribution. There is slight decrease in liquid limit and considerable increase in plastic limit.

Which of the followings soil sample may be used to determine consistency limit of the soil?

Non – Representative Sample → If soil structure mineral content and water content all get modified then it is called non – representative sample.

A sampling tube has an inner diameter and outside diameter as shown in the figure below.

The inside clearance (%) of the samples is

where D3 = Inside diameter of sampling tube

P. For a clay layer, the net ultimate bearing capacity (By Skempton) at the base of the footing is independent of the cohesion of the soil.

Q. If the depth of the strip footing is equal to the width of the footing, then the value of bearing capacity factor (Nc) by skempton is taken to be 6.0.

R. The theory given by Skempton for net ultimate bearing capacity computations is valid for shallow footings only.

This theory is applicable only for C-soils but it can be applied for shallow and deep footings both. In this theory, base resistance and side resistance both are considered. The net ultimate bearing capacity is given by:

Hence for a clay layer, the net ultimate bearing capacity (By Skempton) at the base of the footing is directly proportional to the cohesion of the soil.

This type of failure is seen in relatively loose sand and soft clay.

Some characteristics of local shear failure are:

1. Failure is not sudden and there is no tilting of footing.

2. Failure surface does not reach the ground surface and slight bulging of soil around the footing is observed

3. Failure surface is not well defined

5. In load-settlement curve, there is no well-defined peak

6. Failure is characterized by considerable settlement directly beneath the foundation

7. A significant compression of soil below the footing and partial development of plastic equilibrium is observed.

8. Well-defined wedge and slip surfaces only beneath the foundation.

If the rectangular footing is loaded with eccentric loads having an eccentricity (ex) and (ey) as shown in the figure below, then the effective area taken to calculate the ultimate bearing capacity of soil will be ______ m2 For eccentric condition, effective area is taken to be 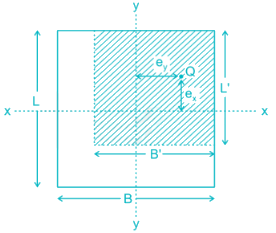 A rectangular footing is located at a depth of 1.5 m below the ground surface. It is required to carry the safe load of 1200 kN at the base of the footing. Calculate the area of the footing at the base in m2. Take factor of safety of 2.5 and bearing capacity factors as NC = 38, Nq = 23 and Nγ = 21. Assume water table at a great depth. Use Terzaghi’s ultimate bearing capacity equation. Assume the length to width ratio of the footing to be 1.5. Cohesion c = 100 kN/m2 and unit weight of soil to be 19 kN/m3.

Ultimate bearing capacity given by Terzaghi for rectangular footing is:

B = width of footing

γ = unit weight of the soil

For raft Foundation [By Terzaghi’s]

Ultimate Bearing Capacity is given by:

Net ultimate Bearing capacity is given by:

A 12 long reinforced concrete pile of diameter 450 mm was driven by drop hammer having total mass of 24000 kg and having an effective fall of 0.9 cm. The average penetration for the last five blows was recorded as 0.6 cm per blow. If the total elastic compression is 2.3 cm, then the safe load on the pile will be _____ kN.

Assume coefficient of restitution and factor of safety to be 0.30 and 2 respectively. Use Hiley’s formula.

Ultimate load carrying capacity of the pile is given by:

s = set (penetration of pile per blow of hammer)

36 Piles are arranged in a square pattern which is embedded in the clayey soil. The shear strength at the base of the pile is 200 kN/m2 and the average shear strength over the depth of the pile is 130 kN/m2. If the Diameter and length of the pile are 0.4 m and 12 m respectively, the safe load that the pile group can carry will be _______ kN. Assume, centre to centre spacing between the pile = 0.8 m, Adhesion factor (α) = 0.50 and Factor of safety = 3

c = cohesion at base of the pile