In a type A chopper, the maximum value of Ripple current is

The peak to peak ripple current has maximum value when duty cycle ∝ = 0.5 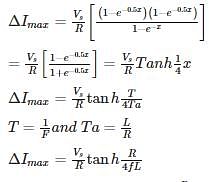 ∴ maximum value of Ripple current is inversely proportional to chopping frequency and the circuit Inductance.

We known Boost regulator is a step – up chopper

A DC chopper operates on 220 V dc and frequency of 500 Hz, feeds on RL load of the output voltage of chopper is 180 V the ON time of the chopper is –(in msec)

DC chopper feed an RLE load. If the value of E increased by 20%, the current ripple

For Regeneration braking load current should be negative.

A single - quadrant chopper is operating with the following specification: Ideal battery of 240 V; on time (Ton) = 1.5 ms, OFF time = 2 ms. The Form factor factor will be –

For Single – quadrant (type A) Chopper

A buck converter is to be designed where Vs = 10V, Vo = 5V,R = 500Ω. The switching frequency is decided to be 20 kHz. Allowable current ripple is 5 mA. The optimum value of inductor is

A step-up chopper shown in figure is to deliver 3A
In to the 10 Ω load. The battery voltage is 12 V, L = 20 μH, C = 100 μF and chopper frequency is 50 kHz. Determine the battery current variation in ampere

over an on-time the change in battery current will be

When the transistor is switched on, current ramps up in the inductor and energy is stored.

When the transistor is switched off, the inductor voltage reverses and acts together with the battery voltage to forward bias the diode, transferring energy to the capacitor.

When the transistor is switched on again, load current is maintained by the capacitor, energy is stored in the inductor and the cycle can start again.

The value of the load voltage is increased by increasing the duty cycle or the on-time of the transistor.

During the transistor on-period, assuming an ideal inductor and transistor

Over an on-time of TON, the change of battery current will be

When the steady variation of battery current has been reached, the variation will be between lo and I1, as shown in. 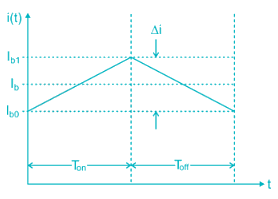 In the circuit shown below, if load R = 500 Ω, switching frequency is 25 kHz and peak to peak ripple current of inductor is limited to 0.9 A then the filter inductance L is"