Statement: The government will soon constitute a committee headed by Prime Minister Narendra Modi to oversee the implementation of the proposed National Energy Policy, which aims to promote energy independence.

Q. What is the reason for implementing the National Energy Policy by the government??

Statement: Casualties of weather-related events have jumpedsignificantly, according to data in the National Health Profile 2017. Increasing exposure to high heat and extreme cold took more lives in 2015 than the previous year, claiming 52.9 percent and 25.8 percent more lives, respectively. The National Health Profile also showed a worrying trend of an increasing number of cases and deaths from diseases that had seen a dip in mortality.

Q. What course of action should be taken by the government to reduce deaths due to weather-related events?

Statement: The ENAM portal, launched by the Centre in April 2016, has 45.4 lakh farmers and 417 mandis across the country registered with it. This number is disappointing, given that there are more than 13 crore farmers in India. ENAM was envisioned as a unified national electronics agriculture market. To implement it, each State has to first amend its APMC Act to make a provision for electronic auction as a mode of price discovery, allow a single license across the State and have market fees levied at a single point.

Q. Which of the following is the reason that the ENAM portal will not be fully functional in any State?

This is clear from the last sentence of the given statement.

Statement: The overreaching vision of the Pradhan Mantri Krishi Sinchayee Yojana (PMKSY) is to ensure access to some means of protective irrigation to all agricultural farms in the country, to produce ‘per drop more crop’, thus bringing much desired rural prosperity. Krishi Sinchayee Yojana, with an outlay of Rs 50,000 crore for a period of 5 years (2015-16 to 2019-20), is to achieve convergence of investments in irrigation at the field level.

Q. What will be the benefits of PMKSY to farmers?

Clearly stated in the last sentence of the statement.

Statement: The World Bank will help draw up a granular makeover blueprint for the Indian Railways, which is investing Rs. 5 lakh crore to transform itself from a colonial-era mass transporter into a strategic platform underpinning growth in Asia’s third-biggest economy.

Q. Which of the following will be the effect on the Indian Railways of the above step taken by the World Bank?

Note that we are being asked about the effect on the Indian Railways, not about that on India.
Hence (c) is ruled out (b) and (d) are too specific and are hence ruled out.

Statement: The Pradhan Mantri Vaja Vandana Yojana (PMVVY) was formally launched by the Union Minister for Finance, Defence, and Corporate Affairs. It aims to provide regular pension to senior citizens.
Q. Which of the following reason​ may have forced the government to introduce the PMVVY?

Option B is a wish and decisions are not taken merely on the basis of the wish. (c) does not have a clear basis. (d) is vague.

Statement: After lowering the Immediate Payment Service (IMPS) charges, the State Bank of India (SBI) reduced charges for National Electronic Funds Transfer (NEFT) and Real-Time Gross Settlement (RTGS) transactions up to 75 percent. The reduced charges will apply to the transactions done through internet banking and mobile banking services offered by the bank.

Q. Which of the following can be concluded from the given information?

Statement: A top American lawmaker has demanded the removal of country-specific quota for legal permanent residency in the US, arguing that over seven lakh high skill immigrant workers from India are stuck in a cycle of temporary work visas due to the “arbitrary” cap on Green Cards.

Q. What may be the reason for the demand placed by the American lawmaker?

Statement: As many as 165 people were arrested on the charge of edition in the last three years across the country. Which averages to one arrest every week. In all, 105 cases were registered. The figures have been compiled by the National Crime Records Bureau.

Q. What course of action should be taken by the government to reduce the cases of sedition?

There is a strong possibility that a number of people are not aware of sedition and the laws related to it.

Statement: India, whose Internet user base is the second largest after China, will remain the fastest-growing market, according to ‘The Future of Internet in India’ report by Nasscom and Akamai Technologies. The report said that 75 percent of new Internet users in India will come from rural areas.

Q. Which of the following can be concluded from the above information?

This seems to be the natural outcome of the rapid digitization going on.

Statement: Standard Chartered Bank has launched a ‘Multicurrency Forex Card’ that offers customers the convenience of loading up to 20 widely used currencies on one card. The card comes with an online reload facility during overseas travel and is designed to offer travelers a secure way to carry money when traveling abroad.

Q. Which of the following will be the benefit of the above ‘Multicurrency Forex Card’ launched by Standard Chartered Bank?

There are several benefits of the multicurrency Forex Card.

Statement: Delhi Metro has become the only completely ‘green’ Metro system in the world for adhering to green building norms for its residential colonies.

Q. Which of the following has been assumed in the above information?

Don’t go for (a), because it is a restatement.

Statement: The government told that of every 100 trains that the Railways canceled during 2014-2016, eight were due to law and order issues or agitations. Other reasons for train cancellation were bad weather, construction, and maintenance work.

Q. Which of the following is not the course of action should be taken by the government to reduce the cases of train cancellation?

We don’t go for (d) because it is not feasible.

Statements: Human-induced climate change has the power to cause a significant rise in sea levels over the next 100 years, a scientist from the Intergovernmental Panel on Climate Change (IPCC) said. Valerie MassonDemotte, the co-chair of IPCC Working Group I, said at the Australian National University (ANU) that human influence on the climate has contributed to changes in the warming of the Greenland ice sheet, something which is affecting sea levels the world over.

Q. Which of the following can be inferred from the given information?

Both (a) and (d) are valid inferences. But (a) is more suitable as a direct inference. (d) is an inference of inference (a).

Statement: In an unprecedented move the US-headquartered McDonald’s that operates the fast-food chain in the north and east India has decided to shut down 43 out of 55 restaurants in Delhi.

Q. Which of the following will be a valid reason for the closure of outlets in Delhi?

The main reason for shutting down of Mc Donald’s restaurant in India is that it is running in loss for the past several months. So, option (a) is a valid answer.

Each of the following questions consists of six statements followed by options consisting of three statements put together in a specific order. Choose the options that indicate a combination where the third statement can be logically deduced from the first two statements and that option will be your answer.

Each of the following questions consists of six statements followed by options consisting of three statements put together in a specific order. Choose the options that indicate a combination where the third statement can be logically deduced from the first two statements and that option will be your answer.

In the question below are given two conclusions followed by four sets of statements. You have to choose the correct set of statements that logically satisfies given conclusions either definitely or possibly. Assume the given statements to be true even if they seem to be at variance from commonly known facts.

Select the related word from the given alternatives.

Which words of the following do not have the same relationship as between the words CHARITABLE and SELFISH?

Charitable and selfish are antonymous to each other. But Adhere and Stick To are synonymous with each other.

Q. Who sits third to the left of Rita? Q. Four of the following five pairs are alike in a certain way and so form a group. Which is the one that does not belong to that group? Q. What is the position of Radha with respect to Ram? 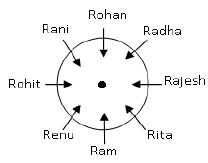 Pointing to a girl, Mohan said, “She is the daughter of my grandfather’s only daughter-in-law”. How is Mohan related to that girl?

The birthday of Ms. Y was celebrated six days before Ms. X, who was born on 4th October 1999. The independence day of that year fell on Sunday. On which day did Ms. Y celebrate her birthday, if it was not a leap year? 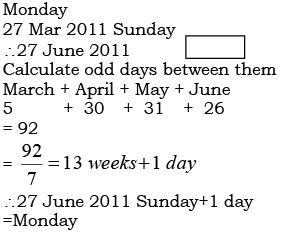