Who was the first Caliph as well as the founder of the Umayyad dynasty of the Caliphate?

Solution: The Umayyads were the first Muslim dynasty, established in 661 in Damascus. Their dynasty succeeded the leadership of the first four caliphs Abū BakrʿUmar I, ʿUthmān, and ʿAlī. It was established by Muʿāwiyah ibn Abī Sufyān, a native of Mecca and a contemporary of the Prophet Muḥammad.
QUESTION: 2

During the reign of which Delhi Sultan did the “Chahalgani” or “Chalisa’ come into existence?

The third ruler of Slave dynasty, Shams-ud-din Iltutmish formed Turkan-i-Chahalgani or Chalisa (a group of 40 powerful Turkish nobles). These were Turkish amirs (nobles) who advised and helped the Sultan in administering the Sultanate.

Whom did Mahmud of Ghazni defeat to conquer and annex Peshawar and Punjab?

During Firuz Tughlaq’s long reign of 40 years, there was only one rebellion by a noble. Who was he?

The system of tax extraction from peasants and sharing among Muslim nobility led to rampant corruption, arrests, execution and rebellion. For example, in the reign of Firoz Shah Tughlaq, a Muslim noble named Shamsaldin Damghani entered into a contract over the iqta' of Gujarat, promising an enormous sums of annual tribute while entering the contract in 1377 AD. He then attempted to force collect the amount deploying his cotorie of Muslim amirs, but failed.

Who was the court poet of Mahmud of Ghazni and author of Shah Namah?

Who among the following Delhi Sultans did not go for any fresh conquests?

Balban was the Muslim ruler of the Slave dynasty, who did not bother for launching any fresh conquest in India. He was worried about the Mongol invasion in this country, for which he preferred the consolidation of the preoccupied territories by the earlier Muslim rulers.

The historical works of which two historians of the Delhi Sultanate have Tarikh-i-Firuzshahi as their title?

Out of all the following who was born to a Hindu mother?

The founder of the city, Sultan Firoz Tughlaq, was born in 1309. His mother, Bibi Naila, was the daughter of a Hindu chief, Ram Mal Bhatti, of Abohar. His father, Nasiruddin Rajab, was the younger brother of Giyasuddin, the first ruler of the Tughlaq dynasty. 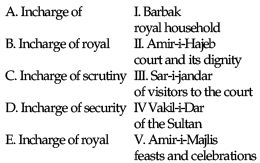 1. Harappa is an archaeological site in Punjab, Pakistan

2. Incomplete male torso was found in Mohenjo-Daro and Mohenjo-daro is an archaeological site in the province of Sindh.

3. Chanhu-daro is an archaeological site belonging to the Indus Valley Civilization. The site is located near Mohenjo-daro in Sindh.

4. Lothal was one of the southernmost cities of the ancient Indus Valley Civilization, located in the Bhāl l region of the modern state of Gujarat

6. Banawali is an archaeological site belonging to the Indus Valley Civilization period in Fatehabad district, Haryana. Fatehabad District, is one of the twenty-two districts of the state of Haryana, India. The Fatehabad district was carved out of Hisar district.

Which one of the following statements about the nature of the Muslim state in India during the Sultanate period is not correct?

Name the Abbasid Caliph who probably conferred on Mahmud of Ghazni, the title of ‘Sultan’ for the first time in the Islamic history.

Sultan Mahmud of Ghazni was born on Nov. 2, 971 in Ghazne, located in northern Kabul, Afghanistan.  his family name, or surname, was Ibn Sebuk Tegin. According to an ethics book written about him, Sebuk Tegin was a Turk from the "Barsahians" who became Muslim when he went to the country Samanis. When he rejected the dominance of the Samanis rulers and established his own state in Ghazne, he went on to raise his son Mahmud as his heir. As a result, Mahmud is considered the first example of a well-educated sultan. And he was conferred this title by Qadir.

Which of the following is not correct ?

The correct answer is C as all the given statements are true except At the time of his accession Qutab-ud-din had to deal with the Chauhans who had conquered Delhi in 1206 A.D.

Who was known as “Lakh Buksh”?

Which of the following statements is incorrect in connection with the political situation obtaining at the time of the accession of Iltutmish to the throne of Delhi ?

Which of the following is incorrect ?

What was the name of the Sultan who ascended the throne of Delhi after the death of Balban?

After Balban's death in 1287, Delhi's kotwal Malik al-Umara Fakhruddin enthroned Balban's teenage grandson Muiz ud din Qaiqabad (or Kayqubad) with the title Muizzuddin. Qaiqabad was a weak ruler, and the administration was actually run by his officer Malik Nizamuddin. After Nizamuddin was poisoned by some rival officers, Qaiqabad summoned Jalal-ud-din from Samana to Delhi, gave him the title "Shaista Khan", appointed him as the ariz-i-mumalik, and made him the governor of Baran.

By this time, Qaiqabad's health had deteriorated, and two rival factions of nobles vied for the power in Delhi. One faction, led by Malik Aytemur Surkha, sought to maintain the power of the old Turkic nobility, and wanted to retain Balban's family on the throne. The other faction, led by Jalal-ud-din, supported the rise of the new nobility

What the word ‘Khalji Revolution’ stands for?

Dr. Ishwari Prasad writes, “He always behaved like a well bred oriental monarch. His sense of kingly dignity was so great that he never ap-peared but in full dress ever before his private servants. He never laughed aloud nor joked in his durbar nor did he permit any one to indulge in laughter or amusement in his presence”. Who is that king?

Which one of the following sultans refused to speak to common people?

Which of the following regions of northern India was not included in the empire of Ala-ud-din Khalji?

What was the name of the south Indian ruler who defeated the army of Ala-ud-din Khalji in 1303?

Pratāparudra, also known as Rudradeva II, was the last ruler of the Kakatiya dynasty of India. He ruled the eastern part of Deccan, with his capital at Warangal. Prataparudra succeeded his grandmother Rudramadevi as the Kakatiya monarch. He defeated the first invasion of the army of Ala uddin Khilji in 1303. It was in Karimnagar district. But later in 1310 or so Khilji defeated the kakatiyas - Prataprudra surrendered and made a pact to pay heavy ransoms.

Which sultan in order to forestall conspiracies banned banquets and assemblies and peppered the country with his spies?

What was the period of rule of Qutb-ud-din Aibak?

Qutb al-Din Aibak was a general of the Ghurid king Mu'izz ad-Din Muhammad Ghori from 1206-1210 A.D.. He was in-charge of the Ghurid territories in northern India, and after Mu'izz ad-Din's death, he became the ruler of an independent kingdom that evolved into the Delhi Sultanate ruled by the Mamluk dynasty.