Who among the following persons has Airtel sim? 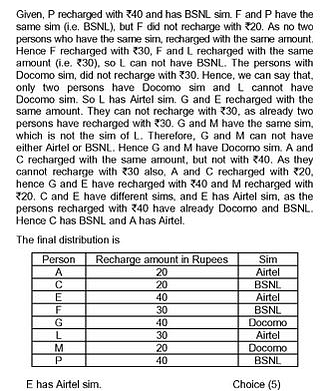 Four of the following five are alike in a certain way based on the given information and hence form a group. Find the one, which does not belong to that group?

Directions for questions: These questions are based on the information given below.

Eight members – P, Q, R, S, T, U, V, W of a family are sitting around a circular table. The family members belong to three generations and each couple has at least one daughter and one son.
Q, the grand father of U, has more number of children than the number of grandchildren. S is opposite his mother T, who is adjacent to her granddaughter. V is to the immediate left of her brother-in-law. P’s daughter R, is to the immediate right of her aunt W. P is third to the right of his sister.

What is the position of R with respect to T?

What is the position of Q with respect to S?

How is S related to U?

Which of the following pairs are not siblings?

How many couples are there in the family?

Directions for questions : These questions are based on the following information.

Each of the six persons A, B, C, D, E and F belongs to a different tribe among P, Q, R, S, T and U. Each of them belongs to one of the four countries Bhutan, China, Mangolia and Pakistan. At least one and at most two persons belong to each of the four countries. Each of them knows exactly one language among Spanish, French, Dutch and Swedish. At least one and at most two know each of these four languages. No two persons have the same combination of country and language. The following information is known about them.

(i) F and C belong to the same country and A and D belong to different countries.

(iii) Two persons know Dutch and two persons belong to each of Bhutan and Pakistan.

(iv) B belongs to Bhutan. Two persons the one who belongs to the tribe R and B know French.

(vi) Neither A nor the person who belongs to Pakistan knows French.

(vii) The persons who are belonging to the tribes Q and U know the same language.

Choose the true statement about the persons who belong to the tribes S and U?

Choose the true statement about the person who belongs to the tribe P. 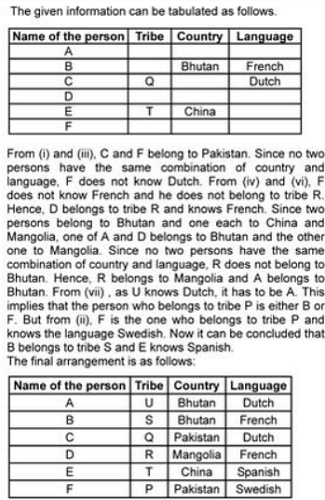 Six girls – A, B, C, D, E and F are sitting in a row facing North and six boys – P, Q, R, S, T and U are sitting in a different row facing South, but not necessarily in the same order. Each girl in a row is facing exactly one boy from the other row. The following information is known about them.
P sits second to the right of the person who sits opposite B. B does not sit at any end of the row. C and D are immediate neighbours of B, and one of them sits at an extremes. E sits second to the left of D but not opposite R.
P is a neighbour of R but is not opposite F. Neither Q nor T are adjacent to P. T is adjacent to either R or Q but not both. U is a neighbour of the person who sits opposite E.

If S and D interchange their positions, then who sits to the immediate left of D?

Four of the following five are alike in a certain way and so form a group. Find the one which does not belong to that group?

Which of the following is true, according to the given information?

Which of the following is correct ?