What is the full form of PH?

It is power of hydrogen

Bro it's power of hydrogen

What is on this study app 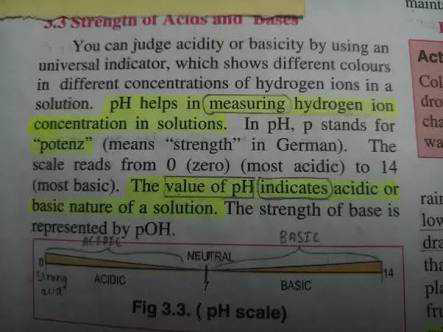 Could u say which book u have prefer.....

Which book is this

Alishka Sharma answered Jan 27, 2020
Potential of Hydrogen i think so

Ananaya Mishra answered Aug 21, 2019
PH was originally acronym for French clause "pouvoir hydrogène," which can be translated into the English as "power of hydrogen," or "potential of hydrogen."

Hey I sent you FriEnD request :)

Mohamed Ismail answered 3 weeks ago
PH stands for Potential of Hydrogen. It refers to the hydrogen ion concentration in a solution. It is the measure of the acidity or alkalinity of a solution. The PHvalue ranges from 0 to 14 on a pH scale.

Keshav Chaudhary answered Jan 11, 2020
PH stands for Potential of Hydrogen. It refers to the hydrogen ion concentration in a solution. It is the measure of the acidity or alkalinity of a solution. The PH value ranges from 0 to 14 on a pH scale.

From where you are

We aren't able to understand that who asked what and to whom? # nirmal

Nothing Aruhi I am also confused

Why u guys are confuse?

Pragya Sharma answered Aug 21, 2019
PH stand for potential of hydrogen it refers to hydrogen ions .The measure of acidity or alkalinity of solution... Saravanan Gowri answered Jan 13, 2020
The p in Ph stands for potenz meaning power.it means that
it is the power of hydrogen ion
concentration.Higher the pH value
lower is H(aq) ion concentration.

The spelling of "absolutely" is absolutely wrong!

Chandreshwar Mishra answered 3 weeks ago
Power of H ion in a sol.

Vishal Chourasiya answered 2 weeks ago
Pernicious of hydrogen.
and also power or potential of hydrogen.

Such 9415 answered Jan 19, 2020
'p' stands for a German word 'potenz' which means 'power' and H stands for hydrogen ion concentration.

Ramesh Gopi answered Feb 09, 2020
Power of hydrogen which is derived from a latin word called potense

Razia Shaik answered 4 weeks ago
PH stands for potential of hydrogen.
It refers to the hydrogen ion concentration in a solution.
It is the measure of the acidity or alkalinity of a solution.
The value of PH ranges from 0-14 on PH scale.

Tejas Devarajan answered Jan 18, 2020
The pH is equal to −log10 c, where c is the hydrogen ion concentration in moles per litre.

U haven't told who is ur waifu. l'll tell my husbando too

It will be Ino for me

U r telling ino as ur waifu or useless

I haven't watch it from last 7 episodes moreover haven't watched any winter 2020 anime except seton. But after boards i'll watch it including your name ,a silent voice ,weathering with u and i want to eat ur pancrease

But this episode is crazy

How is your prep going

I was asking site

Well I was just browsing all images and I found this

Have u seen demon slayer..

I will plan to watch other animes after Board examination

I have planned too

Did u know someday i m gonna to become hokage.

We will see to that

U becoming the Hokage

And i m working hard for it . This is my ninja way.

Let's see who Becomes The Hokage!

U have the same dream??

Ok so from now on we are rivals

I will be as fast as minato

And as hard working as guy sensei

I can't say if she is a good fighter cause I haven't seen that anime.. I just know a few names

She may look cute but she is trash.Perfect example of proverb don't judge a book by its cover.

Now..Now she will become strong towards the end. That's exactly what happened with Yona from Yona of the dawn. She developed herself from a selfish, sheltered crybaby princess to a strong warrior and a mature queen towards the end.

But she never hurt the one who cares for her but sakura hurts.....moreover she reminds a person whom i hate the most in this whole world so i can never stop hating her

Well, I don't have a character whom I hate.

That's what i said everyone have different point of view

By the way, Yona has hurt Hak, her childhood friend and her personal bodyguard many times. In spite of all this, he still loves her. At last, Yona returns his feelings.

But sakura choses sasuke who never care about her not naruto

What's going on between Sakura and Yona

Her abilities are good

Oooo but i don't

All of us are different opinion

Well, Yona liked her cousin who betrayed her and killed her father-the King. Hak rescued Yona and they started their journey. You see, Yona had a crush on her cousin but later she responded to Hak's feelings

Sorry I didn't mean it

The great ninja war begins from tomorrow onwards .My otaku friends are u ready to fight

M kind of scared though...

I m too but we don't need to be, just fight

We can do it

I m scared too

Fav naruto character?? mine is hinata and itachi

Nice. Did u consider any anime girl as waifu??According to me sakura is useless,did u think the same?

Aarti Khullar answered Feb 04, 2020
In pH, 'p' stands for "potenz" and pH means potenz of hydrogen or power of hydrogen.

Ganga Newar answered 4 weeks ago
Potential of hydrogen ..It refers to the hydrogen ion concentration in a solution. It is the measure of acidity or alkalinity of a solution...

Purvanshi Chaudhary answered Jan 27, 2020
It's potential of hydrogen atoms in a solution