Who discovered the cities of Mohenjo daro
Correct answer is option 'D'. Can you explain this answer?
Related Test: Test: In The Earliest Cities - 1

Nidhi Solanki answered Apr 30, 2020
Mohanjodaro means mound of dead.This city was first discovered by R.D.Bànerji in 1922.He was the officer of archeological survey of India.It was one of the largest city of ancient Indus valley civilization ,also known as Harappa civilization.

Ya right, am ok brother

Mohenjo-daro was discovered in 1922 by R. D. Banerji, an officer of the Archaeological Survey of India, two years after major excavations had begun at Harappa, some 590 km to the north. Large-scale excavations were carried out at the site under the direction of John Marshall, K. N. 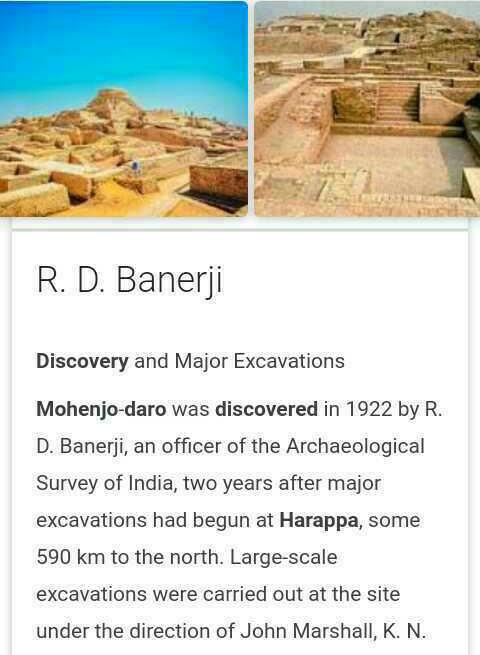 Manpreet Kalra answered 3 weeks ago
Mohenjo-daro was discovered in 1922 by R.D. Baker Banerji, an officer of the Archaeological survey of India,two year after major excavations had begun at Harappa, some 590 km to the north.

Akshita Kumari answered 4 weeks ago
The answer is b. it's discovered by rakhal das benerji

Ajay Patnaik answered May 03, 2020
Mohenjo-Daro discovered by Rakhaldas Banerji 1922 at also known as mount of died

Sharvari Khune answered 3 weeks ago
Ans is b.

Shivam Bhargaw answered 3 weeks ago
The answer given is wrong
correct answer is R.d banerji started excavation in 1921

Mastermind Of All Subjec answered 2 weeks ago
S. B. Daya Ram