Less
CAT Question
TPL is an upcoming football tournament. 12 teams named A, B, C, D, E F, G, H, I, J. K, and L participated in the tournament. The structure of the Tournaments was as follows:
a) In a match if a team wins they get 3 points, 1 point is awarded on the draw and 0 points awarded for a loss.
b)In round 1, the 12 teams will be randomly divided into 3 groups of 4 team each. In this round, every team will play a match with every other team in the group. Once all the matches are done, the team will be ranked based on their points scored. In case of a tie, the team who scored more goals in that round will be given priority. The top 2 teams of each group will go to round 2
c) In round 2, 2 groups are formed. The first group contains the Rank 1 team from round 1 and the second team will consist of Rank 2 teams from round 1. In these rounds, the team will play a match against all the team in the same group. And will be ranked in a similar manner as that of round 1. The top 2 teams from each of the group will move forward to round 3
d) In round 3, the Rank1 teams from both the group play against each other and the Rank 2 teams play each other. The winner of the matches will go on to play the finals to play for rank 1 and rank 2. The losers of the match will play for rank 3 and rank 4
After TPL was over, the following this were known:
In round 1: 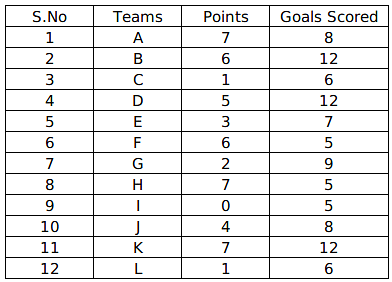 a) No team has all of  their matches resulting in Draw
b) B had a match with A in round 2
c) Team H never had a match with Team
d) A won the match against E by 3-2
e) C lost the match against F by 2-3
f) No 2 teams in a group have the same points as well as the same number of goals.
g) L did not play any match with B
h) In one of the matches where A had a draw, it scored 2 goals
i) Every team scored at least 1 goals in every match except E and F as they scored 0 goals in exactly 1 of their matches
In round 1, How many matches ended in a draw?
Correct answer is '5'. Can you explain this answer? 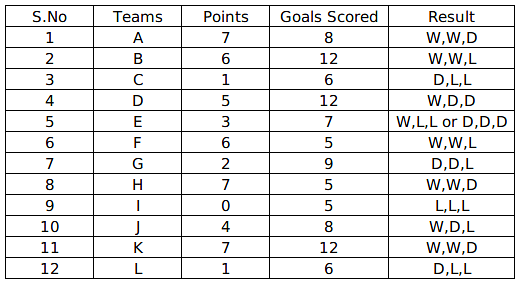 From above we can see that K has a score of 7 which is the greatest among all the teams and it also scored 12 goals which are the greatest among all the team. Thus K will play in round 2. Furthermore, we are given that A plays against B in round 2. It implies A and B got rank 1 in their groups. Thus A, B and K are from different groups and they were the top ranking team in their groups. Let the groups be called I, II and III.
Further, A won the match against E, thus A and E are in the same group
Since B scored 6 points and was able to go to round 2 implies that H was not in the group with B. We are also given that H and K are not in the same team. Thus H has to be in the same group as A

For any match, if it has a result then 3 points are given and if it is a draw then 2 points are given(1 to each team). If all the matches of group 1 have a result then the total sum of points scored by the team will be 6 \times 3 =186×3=18. But we know that A has a match which was resulted draw. Thus maximum possible
For group 1 we know that at least 1 match was draw. Thus the sum of points of Group I has to be less than 18.
Points of A+H+E = 7+7+3 = 17. Thus the fourth team has to be with 0 points i.e. team I and exactly 1 draw match was played in group 1. Thus we can deduce that E won a match and lost 2 matches to score 3 points.

If we combine the results of B, C and F. We get a total of 4 wins, 4 Loss and 1 Draw. Since for any group number of wins has to be equal to the loss. The fourth team must have 3 draws( not possible as only C has 1 draw) or 1 Draw, 1 Win and 1 Loss. J is the only such team. Thus J is in group II. The remaining D and G have to be in group III

Do you know? How Toppers prepare for CAT Exam
With help of the best CAT teachers & toppers, We have prepared a guide for student who are preparing for CAT : 15 Steps to clear CAT Exam
Read for Free Join CAT Courses