ER Model is used to model the logical view of the system from data perspective which consists of these components:

The attribute which uniquely identifies each entity in the entity set is called key attribute.For example, Roll_No will be unique for each student. In ER diagram, key attribute is represented by an oval with underlying lines.

The complete entity type Student with its attributes can be represented as: 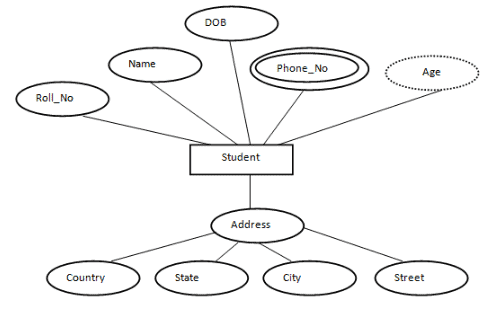 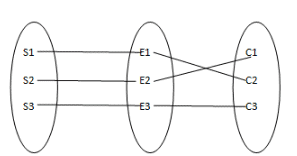 Degree of a relationship set

When there is only ONE entity set participating in a relation, the relationship is called as unary relationship. For example, one person is married to only one person.

When there are TWO entities set participating in a relation, the relationship is called as binary relationship.For example, Student is enrolled in Course.

When there are n entities set participating in a relation, the relationship is called as n-ary relationship.

The number of times an entity of an entity set participates in a relationship set is known as cardinality. Cardinality can be of different types:

Using Sets, it can be represented as:

Using Sets, it can be represented as: 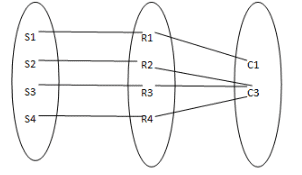 In this case, each student is taking only 1 course but 1 course has been taken by many students.

Using sets, it can be represented as: In this example, student S1 is enrolled in C1 and C3 and Course C3 is enrolled by S1, S3 and S4. So it is many to many relationships.

Participation Constraint is applied on the entity participating in the relationship set.

Total Participation: Each entity in the entity set must participate in the relationship. If each student must enroll in a course, the participation of student will be total. Total participation is shown by double line in ER diagram.

Partial Participation: The entity in the entity set may or may NOT participate in the relationship. If some courses are not enrolled by any of the student, the participation of course will be partial.

Using set, it can be represented as, Every student in Student Entity set is participating in relationship but there exists a course C4 which is not taking part in the relationship.

As discussed before, an entity type has a key attribute which uniquely identifies each entity in the entity set. But there exists some entity type for which key attribute can’t be defined. These are called Weak Entity type.

For example, A company may store the information of dependants (Parents, Children, Spouse) of an Employee. But the dependents don’t have existence without the employee. So Dependent will be weak entity type and Employee will be Identifying Entity type for Dependant.

Entity Relationship (ER) Diagram is diagrammatic representation of data in databases, it shows how data is related.

Note: This article for those who already know what is ER diagram and how to draw ER diagram.

When there is One to Many cardinality in ER diagram 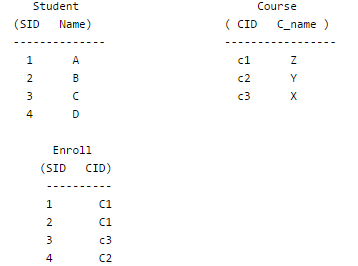 Now the question is, what should be the primary key for Enroll SID or CID or combined. We can’t have CID as primary key as you can see in enroll for the same CID we have multiples SID.  (SID , CID) can distinguish table uniquely, but it is not minimum.  So SID is the primary key for the relation enroll.

For above ER diagram, we considered three tables in database:

But we can combine Student and Enroll table renamed as Student_enroll.

So require minimum two DBMS tables for Student_enroll and Course.

Note: In One to Many relationship we can have minimum two tables.

When there is Many to Many cardinality in ER Diagram

Let us consider above example with the change that now student can also enroll more than 1 course. 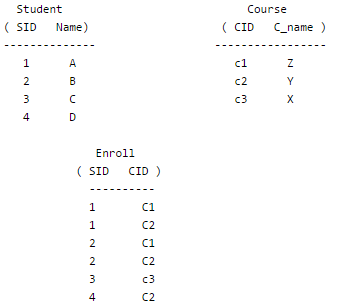 Now, same question what is the primary key of Enroll relation, if we carefully analyse the Enroll primary key for Enrolltable is ( SID , CID ).

Note: Minimum three tables are required in Many to Many relationship.

One to One Relationship

There are two possibilitiesA. If we have One to One relationship and we have total participation at at-least one end.

For example, consider the below ER diagram.

A1 and B1 are primary keys of E1 and E2 respectively.

In the above Diagram we have total participation at E1 end.

B. One to One relationship with no total participation.

A1 and B1 are primary keys of E1 and E2 respectively.

But we can merge R into E1 or E2.  So minimum 2 tables are required.

After designing the ER diagram of system, we need to convert it to Relational models which can directly be implemented by any RDBMS like Oracle, MySQL etc.  In this article we will discuss how to convert ER diagram to Relational Model for different scenarios.

Case 1.  Binary Relationship with 1:1 cardinality with total participation of an entity

A person has 0 or 1 passport number and Passport is always owned by 1 person. So it is 1:1 cardinality with full participation constraint from Passport.

First Convert each entity and relationship to tables.  Person table corresponds to Person Entity with key as Per-Id. Similarly Passport table corresponds to Passport Entity with key as Pass-No. Has Table represents relationship between Person and Passport (Which person has which passport). So it will take attribute Per-Id from Person and Pass-No from Passport.

As we can see from Table 1, each Per-Id and Pass-No has only one entry in Has table. So we can merge all three tables into 1 with attributes shown in Table 2. Each Per-Id will be unique and not null. So it will be the key. Pass-No can’t be key because for some person, it can be NULL.

Case 2: Binary Relationship with 1:1 cardinality and partial participation of both entities

A male marries 0 or 1 female and vice versa as well. So it is 1:1 cardinality with partial participation constraint from both. First Convert each entity and relationship to tables. Male table corresponds to Male Entity with key as M-Id. Similarly Female table corresponds to Female Entity with key as F-Id. Marry Table represents relationship between Male and Female (Which Male marries which female). So it will take attribute M-Id from Male and F-Id from Female.

Table 3  As we can see from Table 3, some males and some females do not marry. If we merge 3 tables into 1, for some M-Id, F-Id will be NULL and for some F-Id, M-Id will be NULL. So there is no attribute which is always not NULL. So we can’t merge all three tables into 1. We can convert into 2 tables. In table 4, M-Id who are married will have F-Id associated. For others, it will be NULL. Table 5 will have information of all females. Primary Keys have been underlined.

In this scenario, every student can enroll only in one elective course but for an elective course there can be more than one student. First Convert each entity and relationship to tables.  Student table corresponds to Student Entity with key as S-Id. Similarly Elective_Course table corresponds to Elective_Course Entity with key as E-Id. Enrolls Table represents relationship between Student and Elective_Course (Which student enrolls in which course). So it will take attribute S-Id from Person and E-Id from Passport.

As we can see from Table 6, S-Id is not repeating in Enrolls Table. So it can be considered as a key of Enrolls table. Both Student and Enrolls Table’s key is same; we can merge it as a single table. The resultant tables are shown in Table 7 and Table 8. Primary Keys have been underlined.

As we can see from Table 9, S-Id and C-Id both are repeating in Enrolls Table. But its combination is unique; so it can be considered as a key of Enrolls table. All tables’ keys are different, these can’t be merged.  Primary Keys of all tables have been underlined.

In this scenario, an employee can have many dependants and one dependant can depend on one employee. A dependant does not have any existence without an employee (e.g; you as a child can be dependant of your father in his company). So it will be a weak entity and its participation will always be total. Weak Entity does not have key of its own. So its key will be combination of key of its identifying entity (E-Id of Employee in this case) and its partial key (D-Name).

As we can see from Table 10, E-Id, D-Name is key for Has as well as Dependants Table. So we can merge these two into 1. So the resultant tables are shown in Tables 11 and 12. Primary Keys of all tables have been underlined.