A Set is a unordered collection of objects, known as elements or members of the set.An element ‘a’ belong to a set A can be written as ‘a ∈ A’,  ‘a ∉ A’ denotes that a is not an element of the set A.

Set builder formIn set builder set is describe by a property that its member must satisfy.1. {x : x is even number divisible by 6 and less than 100}.2. {x : x is natural number less than 10}.

NOTE: Order of elements of a set doesn’t matter.

SubsetA set A is said to be subset of another set B if and only if every element of set A is also a part of other set B.Denoted by ‘⊆‘.‘A ⊆ B ‘ denotes A is a subset of B. 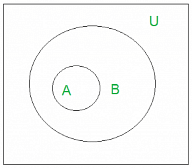 ‘U’ denotes the universal set.Above Venn Diagram shows that A is Subset of B.

Size of a SetSize of a set can be finite or infinite.

Size of the set S is known as Cardinality number, denoted as |S|.

Note: Cardinality of null set is 0.

Cardinality of power set is 2n, where n is number of element in a set.

Cartesian ProductsLet A and B be two sets. Cartesian product of A and B is denoted by A × B, is the set of all ordered pairs (a,b), where a belong to A and B belong to B.

UnionUnion of the sets A and B, denoted by A ∪ B, is the set of distinct element belongs to set A or set B, or both. 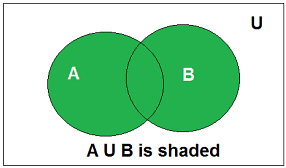 Above is the Venn Diagram of A U B.

IntersectionIntersection of the sets A and B, denoted by A ∩ B, is the set of elements belongs to both A and B i.e. set of common element in A and B. 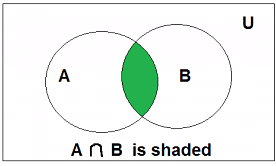 Above is the Venn Diagram of A ∩ B.

DisjointTwo sets are said to be disjoint if their their intersection is the empty set .i.e sets have no common elements. 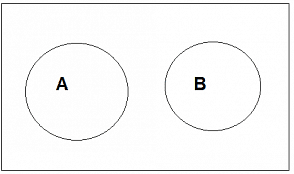 Above is the Venn Diagram of A disjoint B.

Set DifferenceDifference between sets is denoted by ‘A – B’ , is the set containing elements of set A but not in B. i.e all elements of A except the element of B. 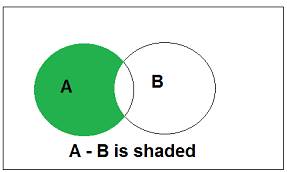 Above is the Venn Diagram of A-B.

ComplementComplement of a set A, denoted by AC

Solution : Set A ∪ B ∪ C contains elements which are present in at least one of A, B and C.