Given two algorithms for a task, how do we find out which one is better?

One naive way of doing this is – implement both the algorithms and run the two programs on your computer for different inputs and see which one takes less time. There are many problems with this approach for analysis of algorithms.1) It might be possible that for some inputs, first algorithm performs better than the second. And for some inputs second performs better.2) It might also be possible that for some inputs, first algorithm perform better on one machine and the second works better on other machine for some other inputs.

We can have three cases to analyze an algorithm:1) Worst Case2) Average Case3) Best Case

Let us consider the following implementation of Linear Search.

In the worst case analysis, we calculate upper bound on running time of an algorithm. We must know the case that causes maximum number of operations to be executed. For Linear Search, the worst case happens when the element to be searched (x in the above code) is not present in the array. When x is not present, the search() functions compares it with all the elements of arr[] one by one. Therefore, the worst case time complexity of linear search would be Θ(n).

In average case analysis, we take all possible inputs and calculate computing time for all of the inputs. Sum all the calculated values and divide the sum by total number of inputs. We must know (or predict) distribution of cases. For the linear search problem, let us assume that all cases are uniformiy distributed (including the case of x not being present in array). So we sum all the cases and divide the sum by (n+1). Following is the value of average case time complexity. 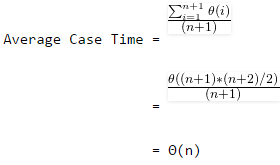 For some algorithms, all the cases are asymptotically same, i.e., there are no worst and best cases. For example, Merge Sort. Merge Sort does Θ(nLogn) operations in all cases. Most of the other sorting algorithms have worst and best cases. For example, in the typical implementation of Quick Sort (where pivot is chosen as a corner element), the worst occurs when the input array is already sorted and the best occur when the pivot elements always divide array in two halves. For insertion sort, the worst case occurs when the array is reverse sorted and the best case occurs when the array is sorted in the same order as output.

1) Θ Notation: The theta notation bounds a functions from above and below, so it defines exact asymptotic behavior. A simple way to get Theta notation of an expression is to drop low order terms and ignore leading constants. For example, consider the following expression.3n3 + 6n2 + 6000 = Θ(n3)Dropping lower order terms is always fine because there will always be a n0 after which Θ(n3) has higher values than Θn2) irrespective of the constants involved.For a given function g(n), we denote Θ(g(n)) is following set of functions.

The above definition means, if f(n) is theta of g(n), then the value f(n) is always between c1*g(n) and c2*g(n) for large values of n (n >= n0). The definition of theta also requires that f(n) must be non-negative for values of n greater than n0.

2) Big O Notation: The Big O notation defines an upper bound of an algorithm, it bounds a function only from above. For example, consider the case of Insertion Sort. It takes linear time in best case and quadratic time in worst case. We can safely say that the time complexity of Insertion sort is O(n^2). Note that O(n^2) also covers linear time. 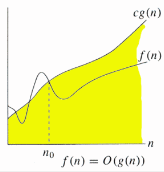 The Big O notation is useful when we only have upper bound on time complexity of an algorithm. Many times we easily find an upper bound by simply looking at the algorithm. 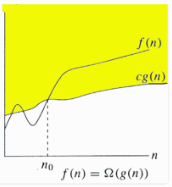 Ω Notation< can be useful when we have lower bound on time complexity of an algorithm. As discussed in the previous post, the best case performance of an algorthm is generally not usefull, the Omega notation is the least used notation among all three.

For a given function g(n), we denote by Ω(g(n)) the set of functions.

Let us consider the same Insertion sort example here. The time complexity of Insertion Sort can be written as Ω(n), but it is not a very useful information about insertion sort, as we are generally interested in worst case and sometimes in average case.

We have discussed Asymptotic Analysis, Worst, Average and Best Casees and Asymptotic Notations in previous posts. In this post, analysis of iterative programs with simple examples is discussed.

1) O(1): Time complexity of a function (or set of statements) is considered as O(1) if it doesn’t contain loop, recursion and call to any other non-constant time function.

// set of non-recursive and non-loop statements

For example  swap() function has O(1) time complexity.A loop or recursion that runs a constant number of times is also considered as O(1). For example the following loop is O(1).

2) O(n): Time Complexity of a loop is considered as O(n) if the loop variables is incremented / decremented by a constant amount. For example following functions have O(n) time complexity.

3) O(nc): Time complexity of nested loops is equal to the number of times the innermost statement is executed. For example the following sample loops have O(n2) time complexity

4) O(Logn) Time Complexity of a loop is considered as O(Logn) if the loop variables is divided / multiplied by a constant amount.

5) O(LogLogn) Time Complexity of a loop is considered as O(LogLogn) if the loop variables is reduced / increased exponentially by a constant amount.

How to combine time complexities of consecutive loops?

How to calculate time complexity when there are many if, else statements inside loops?

As discussed here, worst case time complexity is the most useful among best, average and worst. Therefore we need to consider worst case. We evaluate the situation when values in if-else conditions cause maximum number of statements to be executed.For example consider the liner search function where we consider the case when element is present at the end or not present at all.When the code is too complex to consider all if-else cases, we can get an upper bound by ignoring if else and other complex control statements.

How to calculate time complexity of recursive functions?

Time complexity of a recursive function can be written as a mathematical recurrence relation. To calculate time complexity, we must know how to solve recurrences. We will soon be discussing recurrence solving techniques as a separate post.

What does ‘Space Complexity’ mean?

Auxiliary Space is the extra space or temporary space used by an algorithm.

Space Complexity of an algorithm is total space taken by the algorithm with respect to the input size. Space complexity includes both Auxiliary space and space used by input.