The method that is used to transfer information between internal storage and external I/O devices is known as I/O interface. The CPU is interfaced using special communication links by the peripherals connected to any computer system. These communication links are used to resolve the differences between CPU and peripheral. There exists special hardware components between CPU and peripherals to supervise and synchronize all the input and output transfers that are called interface units.

Now let’s discuss each mode one by one. 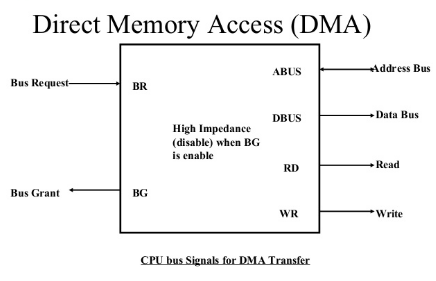 Example it can transfer usingBus Transfer : In which a block sequence consisting of memory words is transferred in a continuous burst where the DMA controller is the master of the memory buses. This mode is needed for fast devices like magnetic disks.Cyclic Stealing : In this DMA controller transfers one word at a time after which it must return the control of the buses to the CPU. The CPU merely delays its operation for one memory cycle to allow the direct memory I/O transfer to “steal” one memory cycle.