Dynamic programming is used where we have problems, which can be divided into similar sub-problems, so that their results can be re-used. Mostly, these algorithms are used for optimization. Before solving the in-hand sub-problem, dynamic algorithm will try to examine the results of the previously solved sub-problems. The solutions of sub-problems are combined in order to achieve the best solution.

So we can say that −

Dynamic programming can be used in both top-down and bottom-up manner. And of course, most of the times, referring to the previous solution output is cheaper than recomputing in terms of CPU cycles.

Given weights and values of n items, put these items in a knapsack of capacity W to get the maximum total value in the knapsack. In other words, given two integer arrays val[0..n-1] and wt[0..n-1] which represent values and weights associated with n items respectively. Also given an integer W which represents knapsack capacity, find out the maximum value subset of val[] such that sum of the weights of this subset is smaller than or equal to W. You cannot break an item, either pick the complete item, or don’t pick it (0-1 property).

A simple solution is to consider all subsets of items and calculate the total weight and value of all subsets. Consider the only subsets whose total weight is smaller than W. From all such subsets, pick the maximum value subset.

If weight of nth item is greater than W, then the nth item cannot be included and case 1 is the only possibility.

Following is recursive implementation that simply follows the recursive structure mentioned above.

It should be noted that the above function computes the same subproblems again and again. See the following recursion tree, K(1, 1) is being evaluated twice. Time complexity of this naive recursive solution is exponential (2^n).

Since suproblems are evaluated again, this problem has Overlapping Subprolems property. So the 0-1 Knapsack problem has both properties of a dynamic programming problem. Like other typical Dynamic programming(DP) problems, recomputations of same subproblems can be avoided by constructing a temporary array K[ ][ ] in bottom up manner. Following is Dynamic Programming based implementation.

Time Complexity: O(nW) where n is the number of items and W is the capacity of knapsack.

Given a graph and a source vertex src in graph, find shortest paths from src to all vertices in the given graph. The graph may contain negative weight edges.We have discussed  Dijkstra`s algorithm for this problem. Dijksra’s algorithm is a Greedy algorithm and time complexity is O(VLogV) (with the use of Fibonacci heap). Dijkstra doesn’t work for Graphs with negative weight edges, Bellman-Ford works for such graphs. Bellman-Ford is also simpler than Dijkstra and suites well for distributed systems. But time complexity of Bellman-Ford is O(VE), which is more than Dijkstra.

AlgorithmFollowing are the detailed steps.

1) This step initializes distances from source to all vertices as infinite and distance to source itself as 0. Create an array dist[] of size |V| with all values as infinite except dist[src] where src is source vertex.

How does this work?

ExampleLet us understand the algorithm with following example graph.

Let the given source vertex be 0. Initialize all distances as infinite, except the distance to source itself. Total number of vertices in the graph is 5, so all edges must be processed 4 times.

The first iteration guarantees to give all shortest paths which are at most 1 edge long. We get following distances when all edges are processed second time (The last row shows final values). 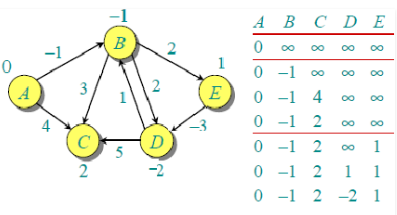 Notes1) Negative weights are found in various applications of graphs. For example, instead of paying cost for a path, we may get some advantage if we follow the path.

2) Bellman-Ford works better (better than Dijksra’s) for distributed systems. Unlike Dijksra’s where we need to find minimum value of all vertices, in Bellman-Ford, edges are considered one by one.

1. Divide: Break the given problem into subproblems of same type.2. Conquer: Recursively solve these subproblems3. Combine: Appropriately combine the answers

Following are some standard algorithms that are Divide and Conquer algorithms.

2) Quicksort is a sorting algorithm. The algorithm picks a pivot element, rearranges the array elements in such a way that all elements smaller than the picked pivot element move to left side of pivot, and all greater elements move to right side. Finally, the algorithm recursively sorts the subarrays on left and right of pivot element.

3)  Merge Sort is also a sorting algorithm. The algorithm divides the array in two halves, recursively sorts them and finally merges the two sorted halves.

6)  Cooley - Tukey Fast Fourier Transform (FFT) algorithm is the most common algorithm for FFT. It is a divide and conquer algorithm which works in O(nlogn) time.

single-digit multiplications in general (and exactly

We will publishing above algorithms in separate posts.