A transaction is a single logical unit of work which accesses and possibly modifies the contents of a database. Transactions access data using read and write operations.In order to maintain consistency in a database, before and after transaction, certain properties are followed. These are called ACID properties. This means that integrity constraints must be maintained so that the database is consistent before and after the transaction. It refers to correctness of a database. Referring to the example above,The total amount before and after the transaction must be maintained.Total before T occurs = 500 + 200 = 700.Total after T occurs = 400 + 300 = 700.Therefore, database is consistent. Inconsistency occurs in case T1 completes but T2 fails. As a result T is incomplete. 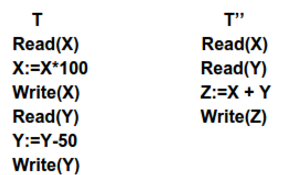 This property ensures that once the transaction has completed execution, the updates and modifications to the database are stored in and written to disk and they persist even is system failure occurs. These updates now become permanent and are stored in a non-volatile memory. The effects of the transaction, thus, are never lost.

The ACID properties, in totality, provide a mechanism to ensure correctness and consistency of a database in a way such that each transaction is a group of operations that acts a single unit, produces consistent results, acts in isolation from other operations and updates that it makes are durably stored.

Concurrency Control deals with interleaved execution of more than one transaction. In the next article, we will see what is serializability and how to find whether a schedule is serializable or not.

Read(A): Read operations Read(A) or R(A) reads the value of A from the database and stores it in a buffer in main memory.

Write (A): Write operation Write(A) or W(A) writes the value back to the database from buffer.

Let us take a debit transaction from an account which consists of following operations:

Assume A’s value before starting of transaction is 5000.

But it may also be possible that transaction may fail after executing some of its operations. The failure can be because of hardware, software or power etc. For example, if debit transaction discussed above fails after executing operation 2, the value of A will remain 5000 in the database which is not acceptable by the bank. To avoid this, Database has two important operations:

Rollback: If a transaction is not able to execute all operations successfully, all the changes made by transaction are undone.

Properties of a transaction

Atomicity: As a transaction is set of logically related operations, either all of them should be executed or none. A debit transaction discussed above should either execute all three operations or none.If debit transaction fails after executing operation 1 and 2 then its new value 4000 will not be updated in the database which leads to inconsistency.

Consistency: If operations of debit and credit transactions on same account are executed concurrently, it may leave database in an inconsistent state. 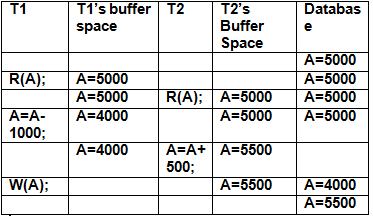 Durable: Once database has committed a transaction, the changes made by the transaction should be permanent. e.g.; If a person has credited $500000 to his account, bank can’t say that the update has been lost. To avoid this problem, multiple copies of database are stored at different locations.

What is a Schedule?

A schedule is series of operations from one or more transactions. A schedule can be of two types:

The constraint that the sum of the accounts x and y should remain constant is that of?

Solution: As discussed in properties of transactions, consistency properties says that sum of accounts x and y should remain constant before starting and after completion of transaction. So, the correct answer is B.

Next article- Serializability of Schedules

How to test if two schedules are View Equal or not ?

Two schedules S1 and S2 are said to be view equal iff following below conditions are satisfied :

If a transaction T1 updated A at last in S1, then in S2 also T1 should perform final write operations.

Above two schedule are not view as Final write operation in S1 is done by T1 while in S2 done by T2.

View Serializability: A Schedule is called view serializable if it is view equal to a serial schedule (no overlapping transactions).

As discussed in Concurrency control, serial schedules have less resource utilization and low throughput. To improve it, two are more transactions are run concurrently. But concurrency of transactions may lead to inconsistency in database. To avoid this, we need to check whether these concurrent schedules are serializable or not.

Conflict Serializable: A schedule is called conflict serializable if it can be transformed into a serial schedule by swapping non-conflicting operations.

Conflicting operations: Two operations are said to be conflicting if all conditions satisfy:

If Oi and Oj are two operations in a transaction and Oi< Oj (Oi is executed before Oj), same order will follow in schedule as well. Using this property, we can get two transactions of schedule S1 as:

Let us take another Schedule:

Two transactions will be:

Note 1: Although S2 is not conflict serializable, but still it is conflict equivalent to S21 and S21 because S2 can be converted to S21 and S22 by swapping non-conflicting operations.

Solution: Two transactions of given schedules are:

Swapping non conflicting operations R1(X) and R2(X) of S2, we get

Again, swapping non conflicting operations R1(X) and R2(Y) of S2’, we get

Again, swapping non conflicting operations R1(X) and W2(Y) of S2’’, we get

which is equivalent to a serial schedule T2->T1.

So, correct option is C. Only S2 is conflict serializable.

Above table shows a schedule with two transactions, T1 reads and writes A and that value is read and written by T2. T2 commits. But later on, T1 fails. So we have to rollback T1. Since T2 has read the value written by T1, it should also be rollbacked. But we have already committed that. So this schedule is irrecoverable schedule.

Irrecoverable Schedule: When Tj is reading the value updated by Ti and Tj is committed before commit of Ti, the schedule will be irrecoverable.

Table 3 shows a schedule with two transactions, T1 reads and writes A and commits and that value is read by T2. But if T1 fails before commit, no other transaction has read its value, so there is no need to rollback other transaction. So this is a cascadeless recoverable schedule.

Cascadeless Recoverable: If Tj reads value updated by Ti only after Ti is commited, the schedule will be cascadeless recoverable.