What is Minimum Spanning Tree?

How many edges does a minimum spanning tree has?

A minimum spanning tree has (V – 1) edges where V is the number of vertices in the given graph.

What are the applications of Minimum Spanning Tree?

Below are the steps for finding MST using Kruskal’s algorithm

1. Sort all the edges in non-decreasing order of their weight.

2. Pick the smallest edge. Check if it forms a cycle with the spanning tree formed so far. If cycle is not formed, include this edge. Else, discard it.

The step#2 uses  Union-Find alogrithm to detect cycle. So we recommend to read following post as a prerequisite.The algorithm is a Greedy Algorithm. The Greedy Choice is to pick the smallest weight edge that does not cause a cycle in the MST constructed so far. Let us understand it with an example: Consider the below input graph.

Now pick all edges one by one from sorted list of edges1. Pick edge 7-6: No cycle is formed, include it.

6. Pick edge 8-6: Since including this edge results in cycle, discard it.

8. Pick edge 7-8: Since including this edge results in cycle, discard it.

10. Pick edge 1-2: Since including this edge results in cycle, discard it.

Since the number of edges included equals (V – 1), the algorithm stops here. 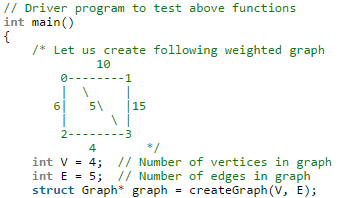 Time Complexity: O(ElogE) or O(ElogV). Sorting of edges takes O(ELogE) time. After sorting, we iterate through all edges and apply find-union algorithm. The find and union operations can take atmost O(LogV) time. So overall complexity is O(ELogE + ELogV) time. The value of E can be atmost O(V2), so O(LogV) are O(LogE) same. Therefore, overall time complexity is O(ElogE) or O(ElogV)

We have discussed Kruskal`s algorithm for Minimum Spanning Tree. Like Kruskal’s algorithm, Prim’s algorithm is also a Greedy algorithm. It starts with an empty spanning tree. The idea is to maintain two sets of vertices. The first set contains the vertices already included in the MST, the other set contains the vertices not yet included. At every step, it considers all the edges that connect the two sets, and picks the minimum weight edge from these edges. After picking the edge, it moves the other endpoint of the edge to the set containing MST.A group of edges that connects two set of vertices in a graph is called cut in graph theory. So, at every step of Prim’s algorithm, we find a cut (of two sets, one contains the vertices already included in MST and other contains rest of the verices), pick the minimum weight edge from the cut and include this vertex to MST Set (the set that contains already included vertices).

How does Prim’s Algorithm Work?

Let us understand with the following example:

Pick the vertex with minimum key value and not already included in MST (not in mstSET). The vertex 1 is picked and added to mstSet. So mstSet now becomes {0, 1}. Update the key values of adjacent vertices of 1. The key value of vertex 2 becomes 8.

Pick the vertex with minimum key value and not already included in MST (not in mstSET). We can either pick vertex 7 or vertex 2, let vertex 7 is picked. So mstSet now becomes {0, 1, 7}. Update the key values of adjacent vertices of 7. The key value of vertex 6 and 8 becomes finite (7 and 1 respectively).

Pick the vertex with minimum key value and not already included in MST (not in mstSET). Vertex 6 is picked. So mstSet now becomes {0, 1, 7, 6}. Update the key values of adjacent vertices of 6. The key value of vertex 5 and 8 are updated.

We repeat the above steps until mstSet includes all vertices of given graph. Finally, we get the following graph.

How to implement the above algorithm?

We use a boolean array mstSet[] to represent the set of vertices included in MST. If a value mstSet[v] is true, then vertex v is included in MST, otherwise not. Array key[] is used to store key values of all vertices. Another array parent[] to store indexes of parent nodes in MST. The parent array is the output array which is used to show the constructed MST. 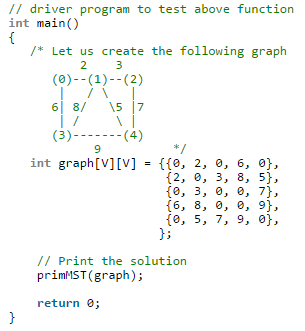 Time Complexity of the above program is O(V^2). If the input graph is represented using adjacency list, then the time complexity of Prim’s algorithm can be reduced to O(E log V) with the help of binary heap.