The document Abiotic Environmental factors Ecosystem - Ecosystem, Class 12, biology Class 12 Notes | EduRev is a part of Class 12 category.
All you need of Class 12 at this link: Class 12

It is a complex physical environmental factor. Light is measured by luxmeter or photometer. It is a electromagnetic spectrum.

In solar radiation wavelength (l ) of light or visible spectrum is 0.4 to 0.7 mm(400–700 nm) it is also called photosynthetically active radiation (PAR).

The U. V. radiation distinguished in 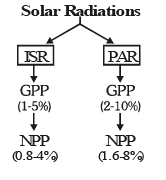 Effect of light – Photokinesis – Regulation of speed of locomotion due to light is called photokinesis e.g. larvae of mussel crab move faster if light intensity increases.

Temperature is measured by the thermometer and under water by thermistor.

Effect of Temperature on animal – Temperature affect the absolute size of an animal and its body parts.

2. Allens rule – The tail, ears, limbs, eyes, snout and hair of mammals are smaller in colder region and larger in warm region.

5. Renschs rule – Birds in cold region have narrow wings and in warm region have broader wings.

SOME EXAMPLES OF MIGRATION

Shelford law of tolerance – Every organism has minimum and maximum limit of tolerance (ecological amplitude) with respect to environmental factors like temperature, sunlight or nutrient concentration in between those limits the central optimum range are found in which organisms are abundant this is known as optimum zone of tolerance. On the basis of temperature vegetation is divided into four groups l Megatherms – The plants growing in high temperature throughout the year e.g. Tropical rain forest 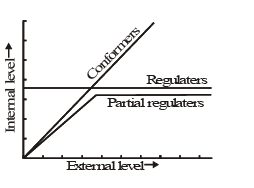 Note :If the stressful external condition are localised or remain only for a short duration the organism has two alternatives, to survive.

Thermal stratification occurs in deep water body because of difference in temperature of water at different depth.

Mainly three layer or zone occurs in water below

3. Hypolimnion – Bottom which is not affected by temperature. Difference in temperature of water at different depths results in thermal stratification in deep water bodies.
During summer, temperature is higher on the surface water, whereas in lower layer temperature is low.
During winter in a temperature lake, water is at freezing temperature on the surface, whereas in the lower layer temperature is about 4°C. The surface water is cooled during autumn, and warmed in spring. This results in a free mixing of water in the whole water body, also known as autumn and spring turnover.
During spring and autumn due to turnover of water oxygen and nutrients are redistributed, resulting in a bloom of phytoplankton growth while during winter and summer, growth of phytoplankton is low due to low nutrients and oxygen availability.

STUDY OF OCEAN ENVIRONMENT
All the ocean basins are roughly of the shape of a wash basin or an inverted hat.

Type I – On the basis of structure : From the coast line a gradually sloping region extends for about 160 km into the sea. This zone is called continental shelf and  has a depth of 8-200 meters. The angle of the slopes then abruptly steepens to form the continental slope. The continental slope levels off into a more or less horizontal ocean floor. The depth of the ocean floor is in the range of several thousand meters. Type III – On the basis of environment : Three major environment may be recognised in the ocean basin.