LIGHTIt is a complex physical environmental factor. Light is measured by luxmeter or photometer. It is a electromagnetic spectrum.

In solar radiation wavelength (l ) of light or visible spectrum is 0.4 to 0.7 mm (400–700 nm) it is also called photosynthetically active radiation (PAR).

Albido value –The ability of a surface to reflect the incoming radiation is called albido value (AV) it is 80% for fresh snow, 20-30% for sand, 5-10% for the forest. 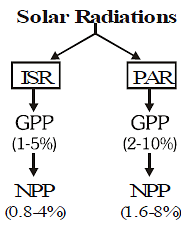 Photokinesis – Regulation of speed of locomotion due to light is called photokinesis e.g. larvae of mussel crab move faster if light intensity increases.

Temperature is measured by the thermometer and under water by thermistor.

Effect of Temperature on plants –

Temperature causes dessication (injury due to dehydration), chilling injury (injury of plant due to cold climate) and freezing injury (injury to plant cell due to ice crystal formation in the intercellular spaces)

Effect of Temperature on animal –

Temperature affect the absolute size of an animal and its body parts.

The tail, ears, limbs, eyes, snout and hair of mammals are smaller in colder region and larger in warm region.

Fishes in cold water possess more vertebrae than those living in warm water.

SOME EXAMPLES OF MIGRATION

Acclimatisation is a gradual physiological adjustment of the organism to the slowly changing new environmental condition. If there is a shift in some environmental factor beyond the tolerance range of an organism the latter can come to the resting stage or migrate.

Shelford law of tolerance –Every organism has minimum and maximum limit of tolerance (ecological amplitude) with respect to environmental factors like temperature, sunlight or nutrient concentration in between those limits the central optimum range are found in which organisms are abundant this is known as optimum zone of tolerance. 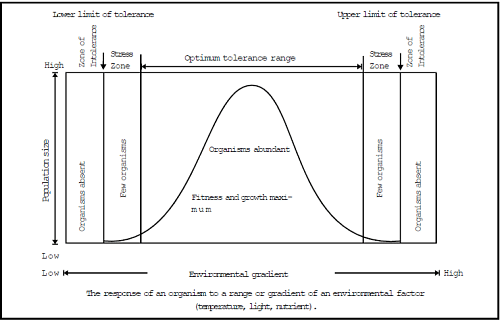 On the basis of temperature vegetation is divided into four groups

Megatherms – The plants growing in high temperature throughout the year

Mesotherms – The plants growing in alternate high and low temperature

On the basis of temperature animals divided into two groups 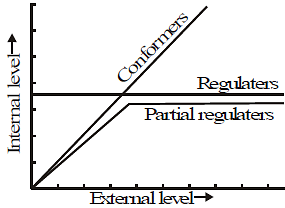 The response of an organism to a range or gradient of an environmental factor (temperature, light, nutrient).

Note : If the stressful external condition are localised or remain only for a short duration the organism has twoalternatives, tosurvive.

Thermal stratification occurs in deep water body because of difference in temperature of water at differentdepth.

Mainly three layer or zone occurs in water below

3. Hypolimnion – Bottom which is not affected by temperature. 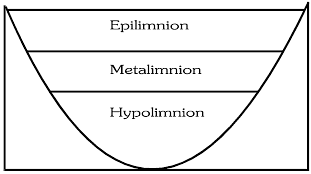 Difference in temperature of water at different depths results in thermal stratification in deep water bodies. During summer, temperature is higher on the surface water, whereas in lower layer temperature is low.

During winter in a temperature lake, water is at freezing temperature on the surface, whereas in the lower layer temperature is about 4°C. The surface water is cooled during autumn, and warmed in spring. This results in a free mixing of water in the whole water body, also known as autumn and spring turnover. 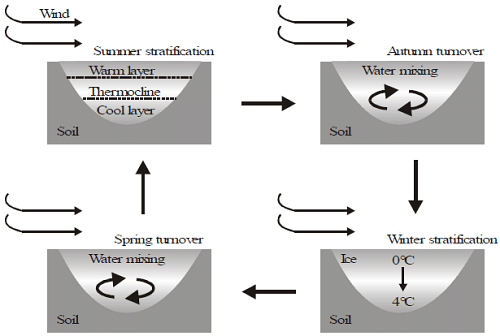 All the ocean basins are roughly of the shape of a wash basin or an inverted hat.

Type I – On the basis of structure :

From the coast line a gradually sloping region extends for about 160 km into the sea. This zone is called continental shelf and has a depth of 8-200 meters. The angle of the slopes then abruptly steepens to form the continental slope. The continental slope levels off into a more or less horizontal ocean floor. The depth of the ocean floor is in the range of several thousand meters.

Type II – On the basis of availability of light :

Type III – On the basis of environment :

Three major environment may be recognised in the ocean basin. 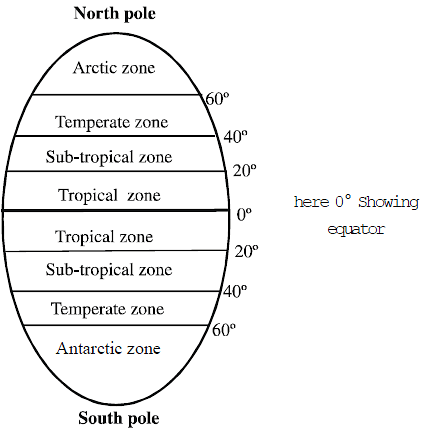 Soil – Soil is the uppermost layer of earths crust formed by weathering of rocks. It is the mixture of living or non living materials.

Soil mineral matter –As a result of weathering the mineral particles of different size are formed. The soil is divided into five types on the basis of size of soil particles.

Note : Loam Soil is the best soil for growing of crops, it has high water holding capacity, high aeration and high root penetration.

Decomposers break down complex organic matter into inorganic substances like carbon dioxide, water and nutrients and the process is called decomposition.Dead plant remains such as leaves, bark, flowers and dead remains of animals, including fecal matter, constitute detritus, which is the raw material for decomposition. The important steps in the process of decomposition are fragmentation, leaching, catabolism humification and mineralisation.

It is important to note that all the above steps in decomposition operate simultaneously on the detritus.

Humification and mineralisation occur during decomposition in the soil. Humification leads to accumulation of a dark coloured amorphous substance called humus that is highly resistant to microbial action and undergoes decomposition at an extremely slow rate. Being colloidal in nature it serves as a reservoir of nutrients. The humus is further degraded by some microbes and release of inorganic nutrients occur by the process known as mineralisation.

Two types of Humus –(i) Mor (Coarse terxtured humus) – It is raw humus and is formed in acidic soil (PH - 3.8 – 4.0) in which decomposition of litter is slow because it has less number of decomposer organism.

(ii) Mull – This is completely decomposed litter i.e. humus because rate of decomposition is fast due to high PH of soil.

It is of three types

Holard – The total amount of water present in the land is called holard.

Hygroscopic water – A thin layer of water attached tightly to soil particles due to forces of cohesion or adhesion. This is non available to plant.

Gravitational water – The water that moves downwards due to gravity, it is non available to plant.

Capillary water – Inter particle spaces or porous spaces act as minute capillaries and some amount of  water is present in these capillaries due to surface tension, This is capillary water. Itis theonly formof soil water which is available to.plant.

Combined water – The water which is present as hydroxides of iron, aluminium silicon, etc. is calledcombined water.

Some Terminology :1. Field capacity – When soil holds all the water except gravitational water, it is known as field capacity. It is upper limit of water availability.

3. Wilting point :The lower limit of water availability of a soil is called wilting point.

3. Amount of water in soil measured by tensiometer. 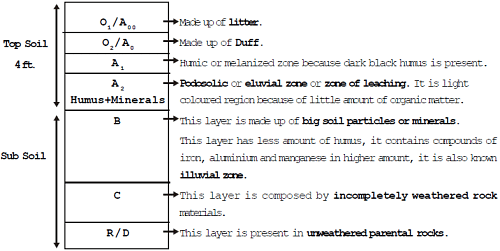 (1) Residual soil – The soil in which soil formation i.e., weathering and pedogenesis, occurs at same place.

(2) Transported soil – Soil in which weathering process occurs at one place and pedogenesis occurs at another place.

(b) Alluvial soil → It is brought throughwater, it is highly fertilesoil.

(d) Eolian soil → This soil is brought through wind.

SOME TERMINOLOGY RELATED TO SOIL

In the tropical area due to high temperature, high rainfall, litter is decomposed very rapidly in A layer. Due to mineralization of litter Al and Fe are liberated in the upper layer (A - layer) of soil, colour of this soil becomes redish-brown, this process is known as laterization.

PODSOLIZATION :In temperate area temperature is low and high humidity occurs. Humus and minerals contents dissolve and percolate with water and are leached from A layer to B layer. Due to loss of chemicals the colour of soil of A layer (horizon) turns to light ash colour. This process is known as podsolization and soil is known as podosols.

In tundra region due to low temperature and humid condition humus is formed in less quantity and moves slowly in B layer. So colour of B layer becomes blue – grey due to deposition of Fe salt. This process is known as gleization and soil is known as gleys.

1. Precipitation – It is a source of soil water. The hydrological cycle is the movement of water between earth, air and atmosphere.

2. Humidity –Atmospheric moisture in the form of invisible vapour is known as humidity. It is expressed in terms of relative humidity.

Relative humidity –The amount of moisture in air as percentage of the amount which the air can hold at saturation at the existing temperature.

Note :R.H. is measured by Psychrometer.Wind speed is measured with the help of anemometer.

3. Topography –It includes the physical features of the earth like altitude, slope, exposure, mountain chains valleys plants. It affects distribution of organism by influencing the climatic factor like light, wind, rainfall etc.