The document About Air Notes - Class 7 is a part of Class 7 category.
All you need of Class 7 at this link: Class 7

Air Is All Around Us :

A thick blanket of air, called the atmosphere, surrounds our Earth. Air is also present in things which seem to be empty. Let us find this out by doing an activity.

Composition Of Air :
It contains mainly nitrogen, and oxygen. It also contains carbon dioxide, noble gases, water vapour, dust particles, and traces of other gases. The composition of air is shown in Figure 16.1. Let us now verify the presence of some constituents of air. 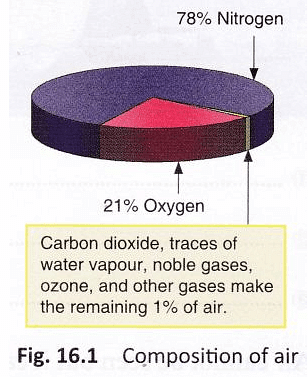 Nitrogen and Oxygen :
Air contains about 78% nitrogen and 21% oxygen. Oxygen in air supports burning whereas nitrogen does not. Let us prove this by doing a simple activity.
Carbon Dioxide:
Air contains about 0.03% of carbon dioxide. Plants and animals take in oxygen and give out carbon dioxide during respiration. When you burn something, carbon dioxide is also produced.
Water Vapour:
Air contains varying amounts of water vapour depending on the weather of a place. You have learnt about the water cycle. The sun heats up the water in seas and oceans. This water evaporates and forms water vapour. You can verify the presence of water vapour in air by observing wet clothes drying on a clothesline (Fig. 16.2). Where does the water from these wet clothes disappear? The water from the wet clothes forms water vapour and mixes with the air. 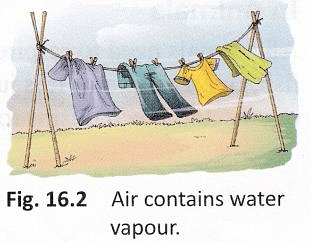 Dust and Smoke:
Have you seen sun rays entering a dark room? Have you noticed tiny particles in the rays? These are dust particles. Air contains dust. Air also contains smoke released from factories and vehicles (Fig. 16.3).

We all need air to survive. Air contains oxygen and carbon dioxide useful to plants and animals. Plants use carbon dioxide of the air to make their own food by a process called photosynthesis. Let us see how air supports life in plants and animals.
In Plants:
Plants have tiny pores called stomata, found on the underside of a leaf (Fig. 16.4). Air containing carbon dioxide and oxygen enters the plant through these openings where it gets used in photosynthesis and respiration.
In Animals:
All animals need to respire, be it a cockroach, a fish, or an elephant. It is just that they use different organs and mechanisms for respiration.
Sometimes, we wrongly use the terms breathing and respiration interchangeably. Breathing is a physical act of taking in oxygen and giving out carbon dioxide, whereas respiration is a chemical process by which glucose in the body breaks down to give energy. 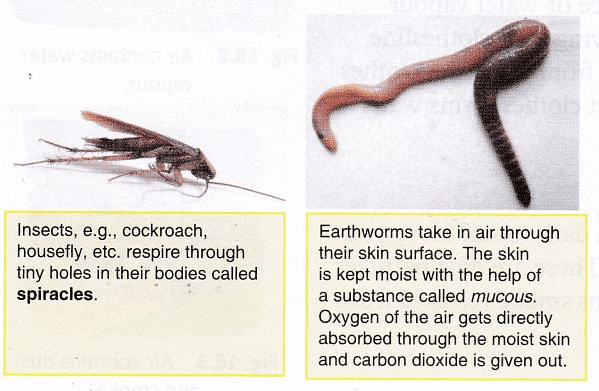 In Aquatic Animals and Plants:
Most aquatic animals like fish, tadpole, crab, and shrimp have special organs for respiration called gills. Gills help to take in oxygen and give out carbon dioxide. Some aquatic animals like dolphin and whale come to the surface of the water regularly to take in air, since they breathe with the help of lungs. 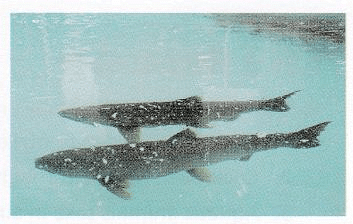 Aquatic plants like Hydrilla also breathe in oxygen dissolved in water through their stomata.

In Amphibians:
Amphibians like frog, newt, and salamander need breathing systems for both air and water. Crocodile and alligator swim through water with part of their snout above the water surface to breathe easily through nostrils.

In Birds:
Birds have an efficient respiratory system as they need high levels of oxygen during flight. Birds have a pair of lungs with air sacs that remain open all the time, so that air can easily pass through them.
In Mammals:
Most mammals breathe with the help of lungs.
They take in oxygen and give out carbon dioxide.

Balance Of Oxygen And Carbon Dioxide In The Air :

The addition of substances in the environment in quantities that are harmful to living beings is called pollution. Air is getting polluted day by day because of various human activities. Burning of fuels like coal and petroleum, excessive burning of fuels like wood, smoke and harmful gases released from industries (Fig. 16.5), smoke released by vehicles (Fig. 16.6), and machines releasing gases are the major causes of air pollution. These gases spread and mix in the air and spoil the quality of air, thereby making it impure.

Air pollution has major adverse effects on plants, animals as well as human beings. Harmful gases present in the polluted air make breathing difficult. Air pollution also leads to a lot of lung disease like asthma and lung cancer. Air pollution also damages crops.
If we do not start looking after the quality of air around us, the oxygen and carbon dioxide levels will no longer be balanced and living beings will be the ones getting affected.
There are a number of ways by which we can reduce air pollution. Some of them are: planting more and more trees, recycling plastics, regular checking of vehicles for emission of harmful gases, etc.

The document About Air Notes - Class 7 is a part of Class 7 category.
All you need of Class 7 at this link: Class 7