B Com : Accounting and Analytical Cost B Com Notes | EduRev

The document Accounting and Analytical Cost B Com Notes | EduRev is a part of the B Com Course Cost Accounting.
All you need of B Com at this link: B Com

The main aim of every organization is to earn. Maximum profit, which depends on costs incurred by an organisation for different activities.There are different types of costs that are relevant to business operations and decisions.It is essential for organizations to have a clear idea about each costs incurred during production.This is because the price at which an organization is willing to supply depends on the costs of production. The costs are broadly grouped into two categories, namely, accounting cost and analytical cost, which are important for business operations and decisions.These two types of costs are shown in figure-2: 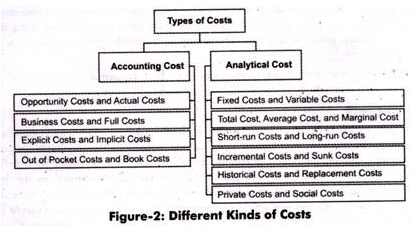