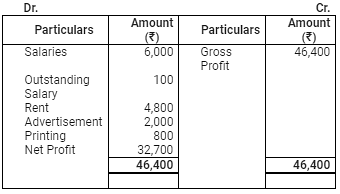 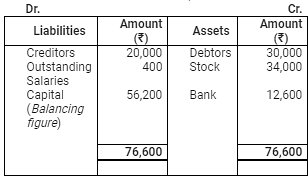 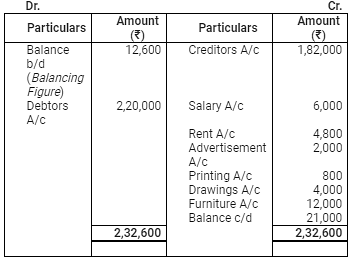 Ascertain his profit or loss for the year 2012-13 & prepare final statement of affairs.Ans :

Statement of Profit or Lossfor the year ended March 31, 2013 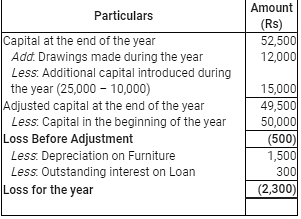 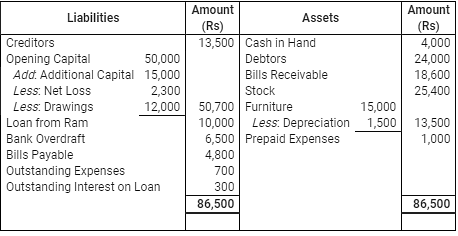 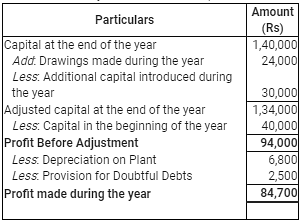 Ques 27: From the following information relating to the business of Mr. X who keeps books by single entry ascertain the profit or loss for the year ended 31st March, 2017: 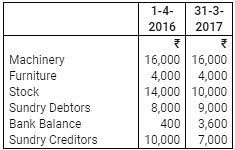 Mr. X withdrew ₹ 4,100 during the year to meet his household expenses. He introduced ₹ 600 as fresh capital. Machinery and furniture to be depreciated by 10% and 5% per annum respectively.Ans:Statement of Affairsas on April 01, 2016 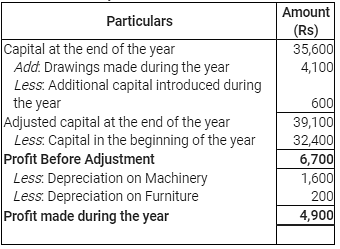 Ques 29: Mr. White does not keep his books properly. Following information is available from his books. 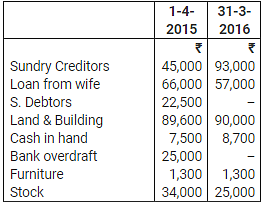 Statement of Profit or Lossfor the year ended March 31, 2016

Ques 28: Mr. A does not keep proper records of his business. Following information is available from records kept by him: 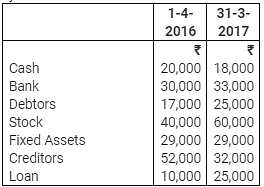 Mr. A withdrew from the business ₹ 3,000 per month upto 30th September 2016 and thereafter ₹ 4,000 per month as drawings. ₹ 50,000 realised by the proprietor as maturity value of National Saving Certificates was invested in the business.Prepare a statement showing net profit (or net loss) for the year.Ans:Statement of Affairsas on April 01, 2016 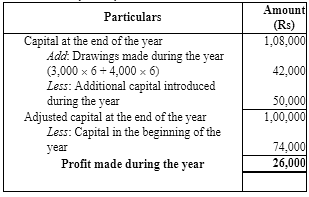 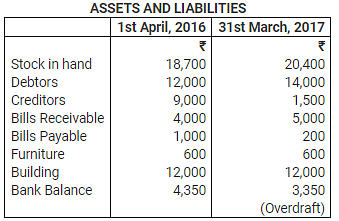 You are also given the following information:(i) A provision of ₹ 1,450 is required for bad and doubtful debts.(ii) Depreciation @ 5% is to be written off on Building and furniture.(iii) Wages outstanding ₹ 3,000; salaries outstanding ₹ 1,200.(iv) Insurance has been prepaid to the extent of ₹ 250.(v) Legal Expenses outstanding ₹ 700.(vi) Drawings of Mr. X during the year were ₹ 7,520.Prepare a statement of Profit as on 31st March, 2017, and a final statement of affairs as at that date.Ans: 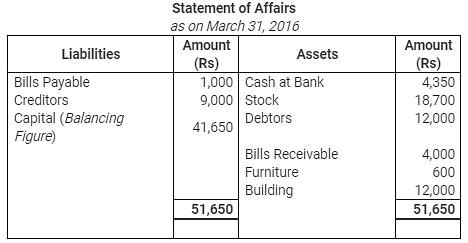 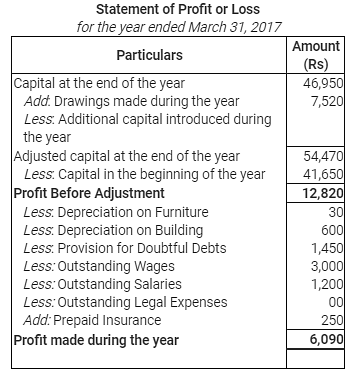 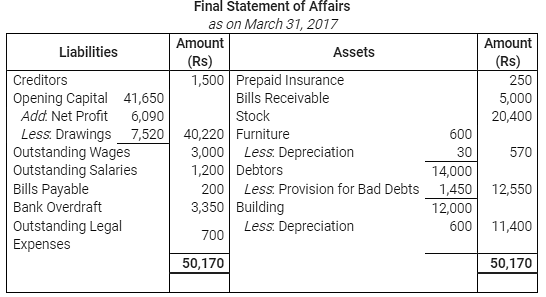 Ques 31: The following information is available from Sachin, who maintains books of accounts on single entry system:

Sachin withdrew ₹ 5,000 from the business every month for meeting his household expenses. During the year, he sold investments held by him privately for ₹ 35,000 and invested the amount in his business.At the end of the year 2016-17, it was found that full year's interest on loan from Mrs. Sachin had not been paid. Depreciation @ 10% per annum was to be provided on furniture for the full year. Shop assistant was to be given a share of 5% on the profits ascertained before charging such share.Calculate profit earned during the year ended 31st March, 2017 by Sachin.Ans: 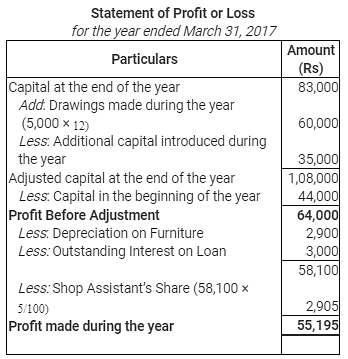 Ques 32: A retail Trader has not kept proper books of accounts. Ascertain his profit or loss for the year ending 31st March, 2017, and prepare a final statement of affairs from the following information: 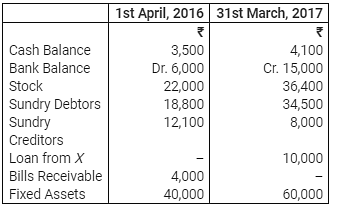 He withdrew from the business ₹ 1,500 per month for his personal use and ₹ 8,000 for giving a personal loan to his brother. He also used a house for his personal purposes, the rent of which at the rate of ₹ 900 per month and electricity charges at an average rate of ₹ 250 per month were paid from the business account.He had received a lottery prize of ₹ 25,000, out of which he invested half the amount in business.He has not paid two months' salary to his clerk @ ₹ 1,200 per month, but insurance premium @ ₹ 600 per annum was paid on 1st October, 2016 to run for one year. 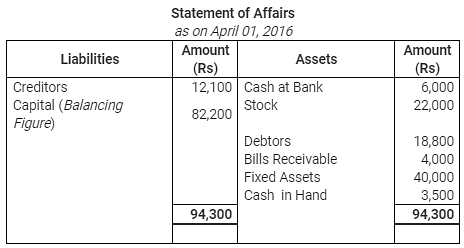 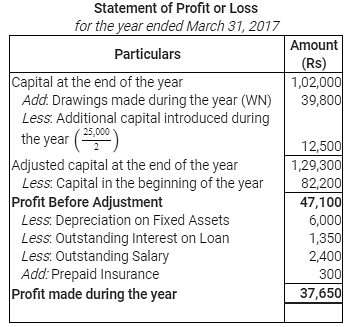 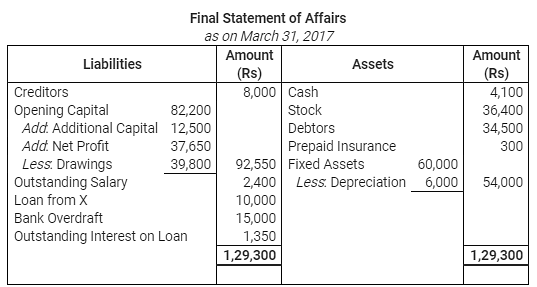 Ques 33: Gopal keeps incomplete records. On 1st April, 2016, his position was as follows: 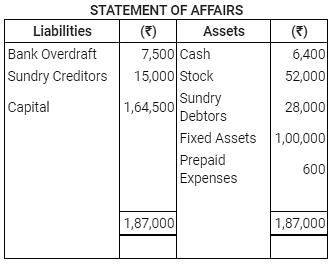 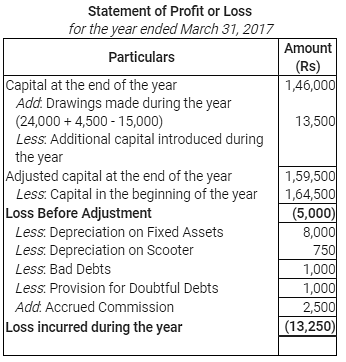 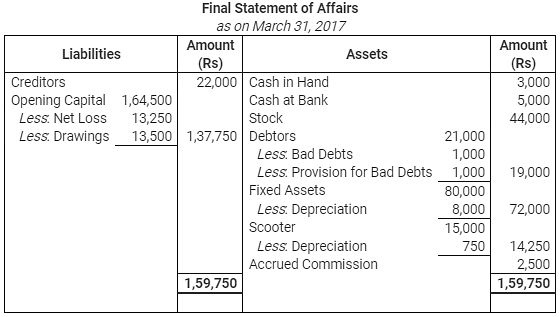 Ques 34: A retail trader did not keep his books on the double entry system. Following balances were obtained from his books: 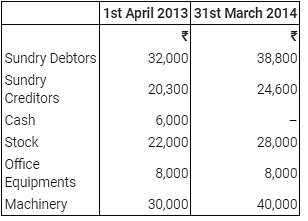 Following further details of the transactions for the year ended 31st March, 2014 are available from his incomplete records: 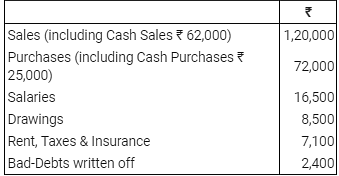 You are required to prepare his Trading, P & L A/c and Balance Sheet after considering the following: 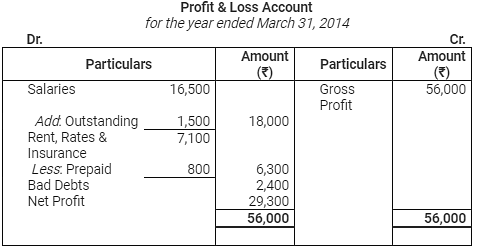 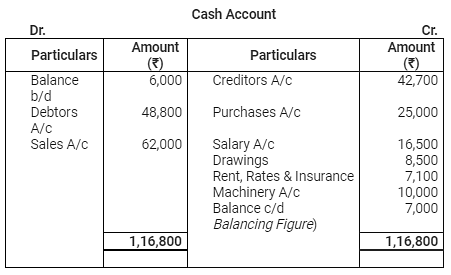 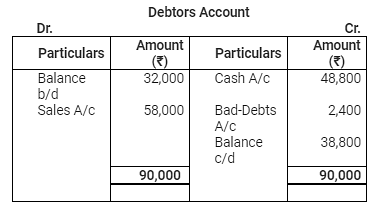 Question 35:
Mr. Manoj keeps incomplete records. During the year 2014-15 the analysis of his cash book was as under:-

Adjustments:
(i) Write off further bad-debts ₹ 2,000.
(ii) Provide 5% for doubtful debts and 2% for discount on debtors and creditors.
(iii) Charge 10% p.a. depreciation on furniture.
(iv) One month salaries and one month rent was outstanding.

Prepare Trading and Profit & Loss Account for the year ended 31st March, 2015 and a Balance Sheet as at that date.
ANSWER:

Page No 23.59:
Question 36:
Sh. Param Bhushan does not maintain proper books of accounts. From the following, prepare his trading and profit & loss account for the year ended 31st March, 2015, together with balance sheet as at that date: 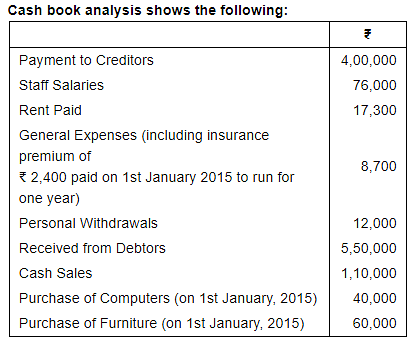 The following further information is available:Closing Stock ₹ 1,35,000; Closing Debtors ₹ 1,92,000; Closing Creditors ₹ 72,000; Outstanding Salaries at the end ₹ 6,000; General Expenses include ₹ 5,000 for house rent of Sh. Param Bhushan and Cash Sale include ₹ 30,000 for sale of his personal jewellery.Create a provision of

for doubtful debts and depreciate plant and machinery by 10% p.a. and computers and furniture by 20% p.a. Also provide 5% for group incentive commission to staff on net profit after charging such commission.
ANSWER: