Question 12: Kuldeep, a general merchant, keeps his accounts on Single Entry System. He wants to know the results of his business on 31st March, 2019 and for that following information is available:

During the year, he had withdrawn ₹ 5,00,000 for his personal use and invested ₹ 2,50,000 as additional capital. Calculate his profits on 31st March, 2019 and prepare the Statement of Affairs as on that date. 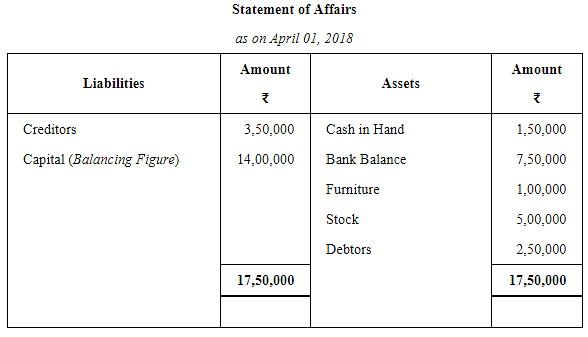 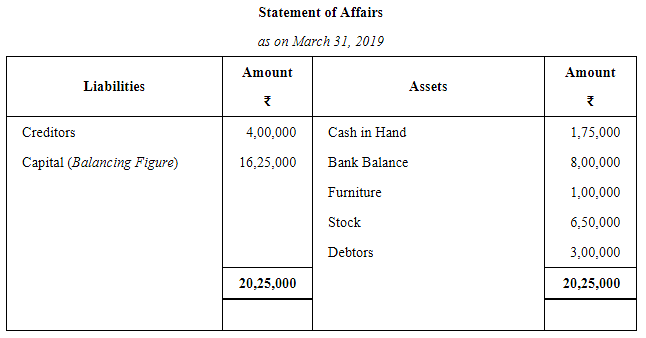 Page No 20.41:Question 13:Following information is supplied to you by a shopkeeper:

During the year, he withdrew ₹ 2,500 per month for domestic purposes. He also borrowed from a friend at 9% a sum of ₹ 20,000 on 1st October, 2018. He has not yet paid the interest. A provision of 5% on debtors for doubtful debts is to be made.Ascertain the profit or loss made by him during the period. 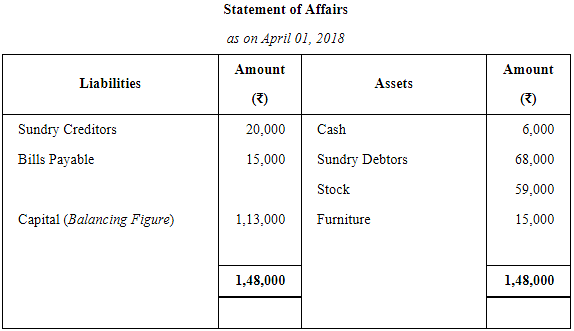 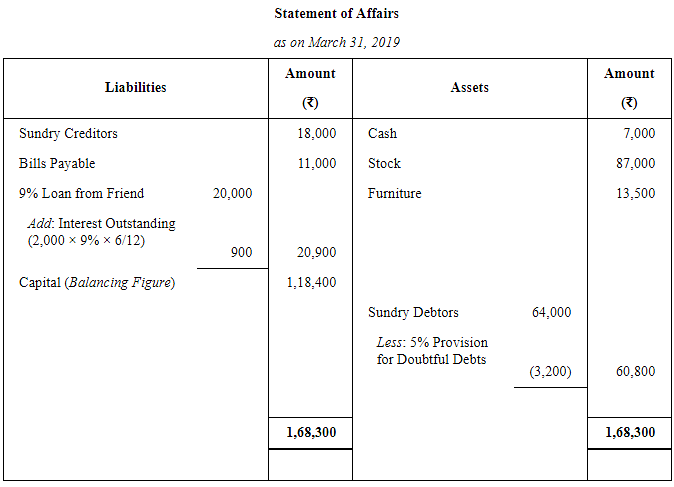 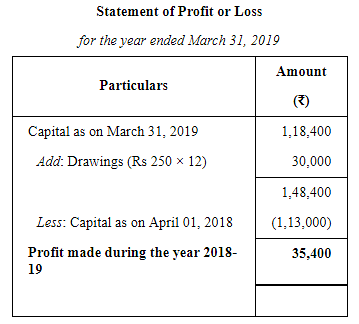 Vikas is keeping his accounts according to Single Entry System. His capital on 31st December, 2015 was ₹ 2,50,000 and his capital on 31st December, 2016 was ₹ 4,25,000. He further informs you that during the year he gave a loan of ₹ 30,000 to his brother on private account and withdrew ₹ 1,000 per month for personal purposes. He used a flat for his personal purpose, the rent of which @ ₹ 1,800 per month and electricity charges at an average of 10% of rent per month were paid from the business account. During the year he sold his 7% Government Bonds of ₹ 50,000 at 1% premium and brought that money into the business.Prepare a Statement of Profit or Loss for the year ended 31st December, 2016.ANSWER: 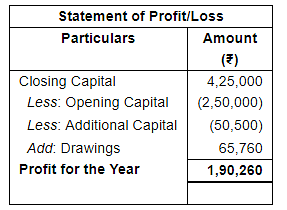 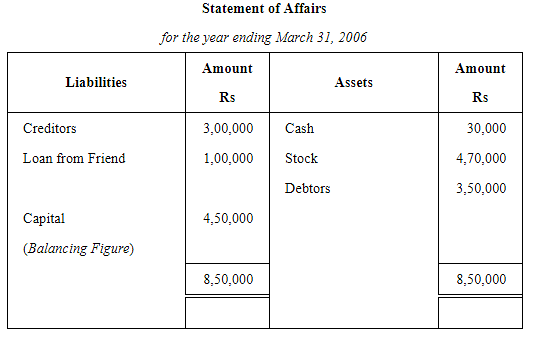 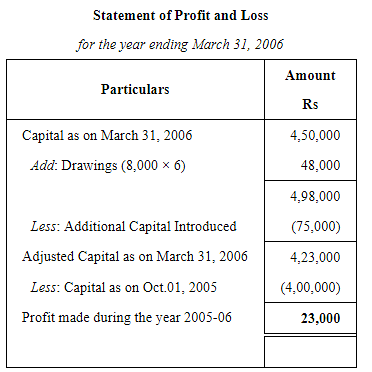 From the following information relating to the business of Abhay who keeps books on Single Entry System, ascertain the profit or loss for the year 2018–19:

Abhay withdrew ₹ 4,100 during the year to meet his household expenses. He introduced ₹ 300 as fresh capital on 15th January, 2019. Machinery and Furniture are to be depreciated at 10% and 5% p.a. respectively.ANSWER: 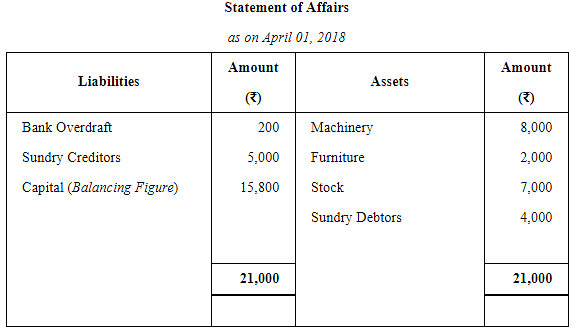 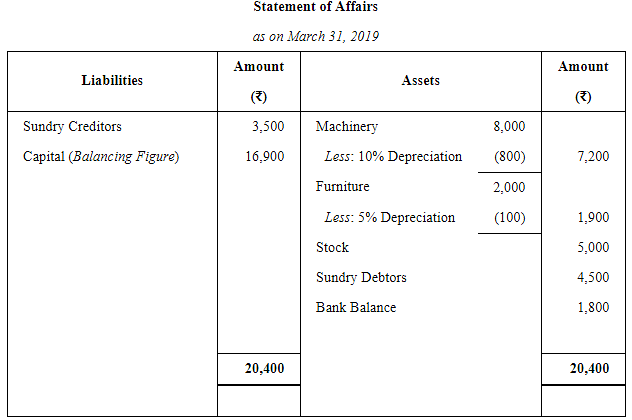 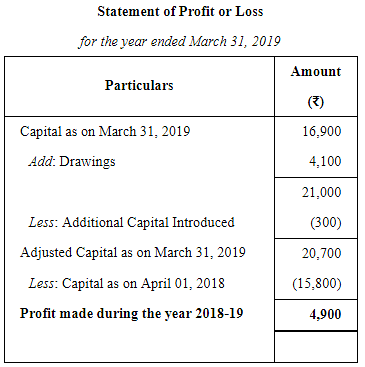 Question 17:Aditya a retailer, has not maintained proper books of account but it has been possible to obtain the following details:

Calculate the net profit for this year and draft the Statement of Affairs at the end of the year after noting that:(a) Shop Fittings are to be depreciated by ₹ 780.(b) Aditya has drawn ₹ 100 per week for his own use.(c) Included in the Trade Debtors is an irrecoverable balance of ₹ 270.(d) Interest at 5% p.a. is due on the loan from Naresh but has not been paid for the year.ANSWER: 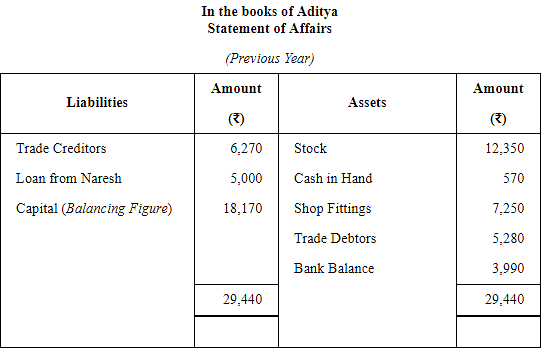 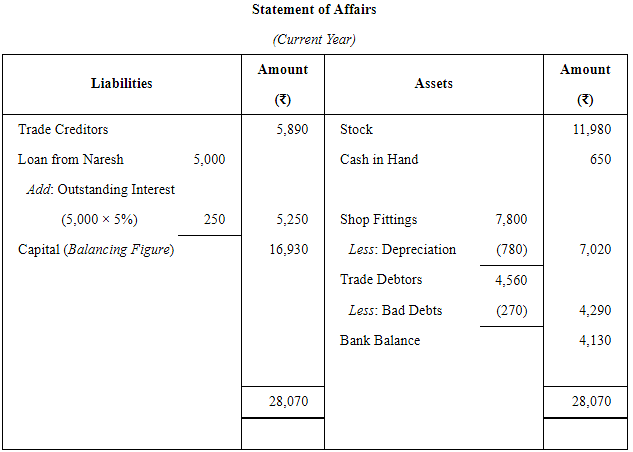 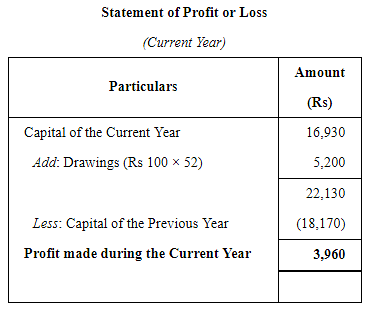 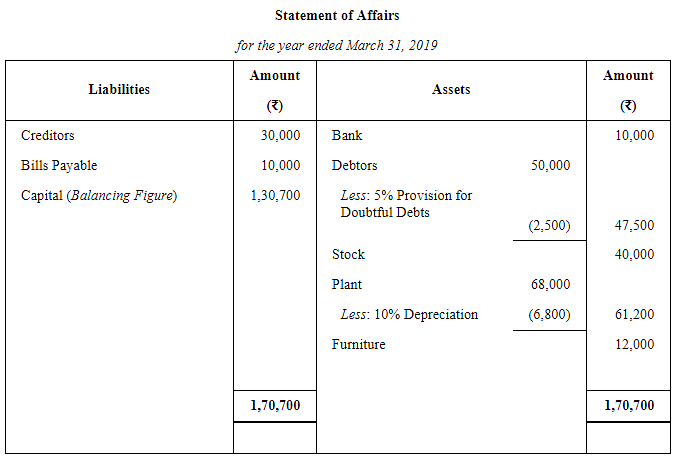 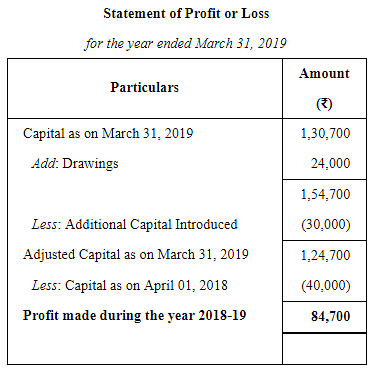 Chaman maintains his books according to Single Entry System. Following figures were available from the books for the six months ended 31st December 2018:

Adjustments:(a) He had withdrawn ₹ 200 in the beginning of every month for household purposes.(b) Depreciation on Plant and Machinery @ 10% p.a.(c) Further Bad Debts ₹ 5,000 and Provision for Doubtful Debts to be created @ 2%.(d) During the period, salaries have been prepaid by ₹ 500 while wages outstanding were ₹ 1,000.(e) Interest on drawings to be reckoned @ 6% p.a.You are required to prepare the Statement of Profit or Loss for the half year ended 31st December, 2018, followed by Revised Statement of Affairs as on that date.ANSWER: 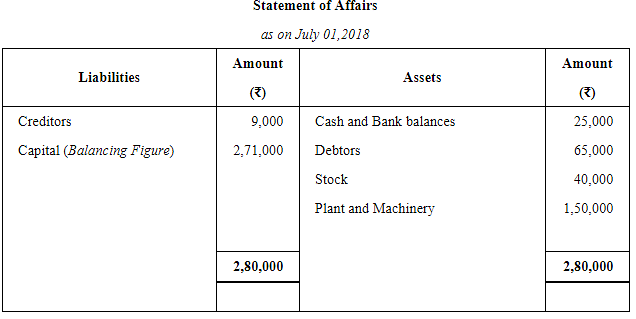 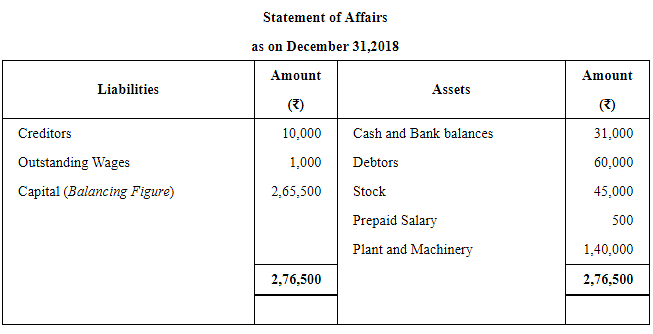 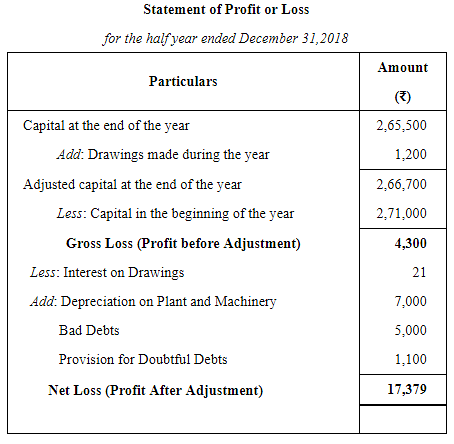 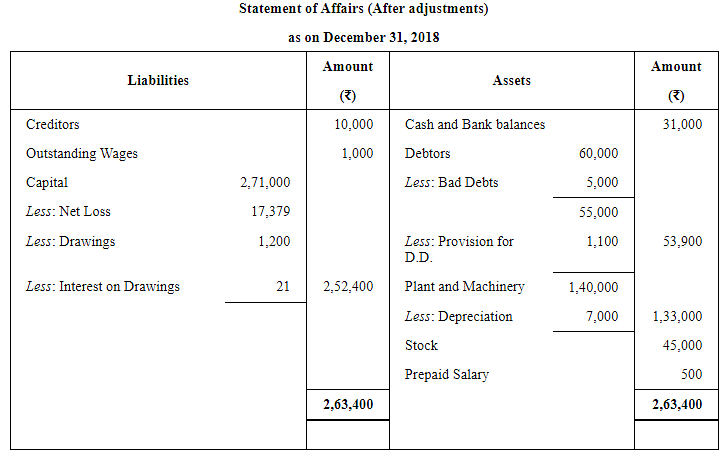 Working Notes:WN1: Depreciation on plant and machinery would be charged for six months only i.e.,

WN2: Amount of Provision for Doubtful Debts would be

WN3: Calculation of Amount of Interest on Drawings: 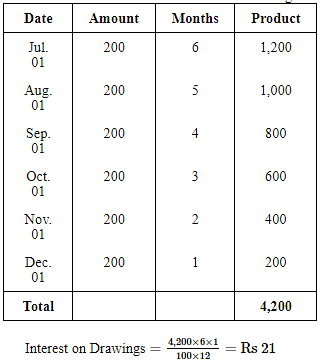