What are Redox Reactions?

A redox reaction can be defined as a chemical reaction in which electrons are transferred between two reactants participating in it. This transfer of electrons can be identified by observing the changes in the oxidation states of the reacting species.An illustration detailing the electron transfer between two reactants in a redox reaction is provided below.In the illustration provided below, it can be observed that the reactant, an electron, was removed from reactant A and this reactant is oxidized. Similarly, reactant B was handed an electron and was therefore reduced.

The loss of electrons and the corresponding increase in the oxidation state of a given reactant is called oxidation. The gain of electrons and the corresponding decrease in the oxidation state of a reactant is called reduction.Electron-accepting species which tend to undergo a reduction in redox reactions are called oxidizing agents. An electron-donating species which tends to hand over electrons can be referred to as a reducing agent. These species tend to undergo oxidation. It can be noted that any redox reaction can be broken down into two half-reactions, namely the oxidation half-reaction and the reduction half-reaction.When writing these half-reactions separately, each of them must be balanced in a way that all the electrons are accounted for.

The different types of redox reactions are:

1. Decomposition ReactionThis kind of reaction involves the breakdown of a compound into different compounds. Examples of these types of reactions are:

All the above reactions result in the breakdown of smaller chemical compounds in the form of AB → A + BBut, there is a special case that confirms that all the decomposition reactions are not redox reactions.For example CaCO3 → CaO + CO2Also Read: Types of Reactions

2. Combination ReactionThese reactions are the opposite of decomposition reaction and hence involve the combination of two compounds to form a single compound in the form of A + B → AB. For example:

(i) Metal DisplacementIn this type of reaction, a metal present in the compound is displaced by another metal. These types of reactions find their application in metallurgical processes where pure metals are obtained from their ores.For example CuSO4+Zn → Cu+ZnSO4

A few examples of redox reactions, along with their oxidation and reduction half-reactions are provided in this subsection.

Example 2: Reaction Between Zinc and CopperThis is a type of metal displacement reaction in which copper metal is obtained when zinc displaces the Cu2+ion in the copper sulfate solution as shown in the reaction below.Zn (s) + CuSO4 (aq) → ZnSO4 (aq) + Cu (s)The oxidation half-reaction can be written as: Zn → Zn2+ + 2e–The reduction half-reaction can be written as: Cu2+ + 2e– → Cu

Thus, copper is displaced from the copper sulfate solution by zinc in a redox reaction.

Example 3: Reaction between Iron and Hydrogen PeroxideFe2+ is oxidized to Fe3+ by hydrogen peroxide when an acid is present. This reaction is provided below.2Fe2+ + H2O2 + 2H+ → 2Fe3+ + 2H2OOxidation half-reaction: Fe2+ → Fe3+ + e–Reduction half-reaction: H2O2 + 2e– → 2 OH–Thus, the hydroxide ion formed from the reduction of hydrogen peroxide combines with the proton donated by the acidic medium to form water.

In order to understand redox reactions, let us first deal with oxidation and reduction reactions individually.

Identification of Oxidizing and Reducing Agents

Example: Identify the oxidizing agent and reducing agent in the reactions. 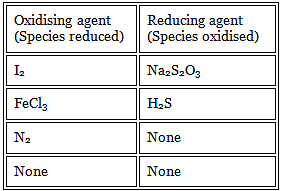 It is not a redox reaction. In each of the following reactions indicate the species oxidised the species reduced, oxidant and reductant

Example 1: Balance the following redox reaction in the acid medium by the ion-electron method. 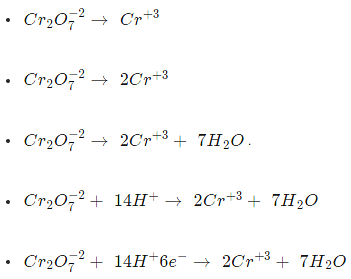 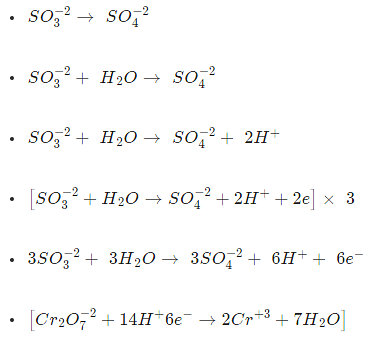 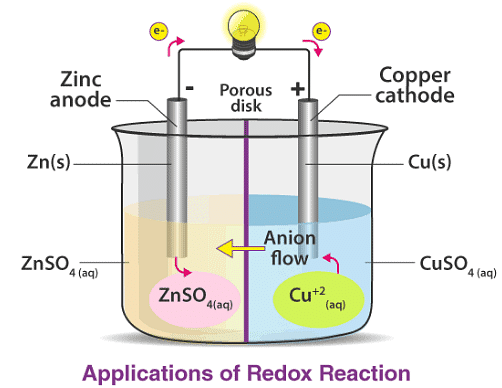 Batteries or electrochemical cells used in our day-to-day life are also based on redox reactions. For example, storage cells are used in vehicles to supply all the electrical needs of the vehicles.

Applications in PhotosynthesisGreen plants convert water and carbon dioxide into carbohydrates and this process is defined as photosynthesis. The reaction is given as 6CO2 + 6H2O → C6H12O6 + 6O2

In the above reaction, we can see that carbon dioxide is reduced to carbohydrates while the water gets oxidized to oxygen and hence it is a redox reaction. The energy is provided by the sunlight for this reaction. This reaction is a source of food for animals and plants.

The main source of oxidation is oxygen and therefore redox reaction or oxidation-reduction reactions are responsible for food spoilage.

What Happens In An Acid Base Reaction?

An acid-base reaction is a reaction between an acid and a base. The result of this reaction is neutralization of the acid by the base, and vice versa, resulting in a solution that is neither acidic nor basic. For this reason, acid-base reactions are often referred to as neutralization reactions.For example, a very common acid is hydrochloric acid. The reaction between strong acid says hydrochloric acid and strong base say sodium hydroxide forms salt and water. The complete chemical equation is shown below.HCl (strong acid) + NaOH (strong base) → NaCl (salt) + H2O (water)In an acid-base reaction, the acid donates a proton to form a conjugate base and the base accepts a proton to form a conjugate acid. Acid/base reactions should be initiated at room temperature in the absence of light. Heat should be avoided where possible because this introduces a second variable.