Solution: Alkyl groups are electron-donating, +I effect giving group, decreases acid strength. Methanoic acid (III) in has no alkyl group bonded to —COOH, hence, strongest acid. The smallest alkyI group ( -CH3) is in ethanoic acid, it is the strongest amongst I, II, IV. Between II and IV, IV has two alkyl groups bonded at C-2, greater +1 effect, weaker the acid. Thus, the overall order of acid strength is

Example:
Arrange the following in decreasing order of their acid strength

Example:
Arrange the following acids increasing order of their acid strength
(a) CH3CH2CH2COOH (I),

Basic Strength and its Determination by Inductive Effect
Ammonia and its alkyl derivatives amines, aryl derivative anilines, are all Lewis- Base because they all have a lone-pair of non bonded electron on nitrogen that can be donated to a Lewis acid. An amine can also act as a Bronsted- Lowry base by accepting a proton from a proton acid.
Reaction of amine as nucleophile

Reaction of amine as proton base

Compare the basic strength of following

Effect of Resonance over Acid-Strength
As discussed earlier, an election withdrawing group increases acid strength by facilitating the release of H+ ion while an electron donating group decreases the acid strength an it opposes the ionization process and makes release of H+ difficult. A further better approach to compare the acid strength is to compare the stability of conjugate base - a strong acid is one that produce a stable conjugate base after ionization. To illustrate it let us consider the case of aliphatic and aromatic alcohols

Since, phenoxide ion as stabilized as shown below, a more stable conjugate base than alkoxide ion (RO)

Due to above resonance stabilization of conjugate base, phenol is stronger acid than aliphatic alcohols

(Here positive charge does not come on the carbon bearing - OH group, not stabilized and therefore, ionization  is not helped by resonance)

Ortho nitrophenol: In case of ortho isomer of nitrophenol, the resonance effect favours ionization and hence, acid strength as

On the basis of resonance effect, ortho nitrophenol is stronger acid than meta nitrophenol as well as phenol. However, between ortho and para, the resonance effect is common and has no role in comparative acid strength. Nitro group is a strong electron withdrawing group by -I effect also and the magnitude of inductive effect depends on distance. On that basis ortho nitrophenol should have been stronger acid than its para isomer since, ortho position is closer. However, this is not true on the not of a new effect called ' Ortho effect". Nitro group from ortho position stabilize the acid by intramolecular H-bonding as shown below, and lowers the acid strength

Due to the above ortho effect, release of H+ becomes slightly difficult. Ortho effect wins over the inductive effect and makes ortho nitrophrno weaker acid than pare nitrophenol.
Ortho effect is stronger than inductive effort but weaker than resonance effect. Therefore, the acidity order of three nitrophenols and unsubstituted phenol is

Example:
Rank the following substituted phenols in increasing order of their acid strength explaining reasons for your order.

Effect of Resonance Over Basic Strength
Basic strength depends on how easily the base can react with an acid. Let us consider the case of amines. Amines are all Lewis base which denote a long-pair of electron to a  Lewisacid . The strenght of a Lewis base depends on its ability to donate its base-past to a Lewis acid. In turn electron-donating ability of a Lewis base depends on availability of electron around the donor atom. Resonance effect can influence the basic strength by influencing the electron density around the donor atom.

Aliphatic Amines and Aromatic Amines
In aliphatic amine electron donating inductive effect of alkyl group increases the electron density around nitrogen hence, the basic strength. On the other hand, in aromatic amine, lone-pair of electron on nitrogen is involved in resonance, less available in nitrogen for donation to a Lewis acid. hence, a weaker base as-

Above resonance delocalization of base-pairs of nitrogens in aniline decreases its basic strength.

Between ortho and para nitro aniline, influence of resonance is common but at the same time nitro group is also a very strong -I effect giving group, which depends on distance. Since, ortho position in closer, it is further weaker base due to greater -I effect from this position. Nitro group is not in resonanace with —NH2 from meta position as described below

Steric Inhibition to Resonance and Acid-Base Strength
Resonance ability of an atom is lost if it loses planarity with the other part of system due to steric crowding by bulky group on adjacent position. To illustrate it, let us consider the following two examples -

The above two compounds A and B have everything identical except position of two methyl groups. It is expected that A should be stronger base than B due to closeness of two electron donating methyl groups to — NH2. The fact is opposite to this. The significant factor affecting the basic strength of these two compounds is -R effect of -NO2 group. In compound B, - NO2 is surrounded by two bulky methyl group and they sterically repel the - NO2 group. In order to minimize the steric repulsion by the two adjacent methyl group, the nitro group loses planarity with the benzene ring. So now - NO2, due to lack of planarity with ring. not able to resonate. This is known as steric inhibition to resonance.Thus, in B, -NO2 is not decreasing basic strength by resonance. In A -NO2 lies in the plane of ring, it is in resonance with ring, decreases basic strength of - NH2 by resonance, hence, weaker base. The above principle applies well in case of acid strength also. Let us consider the following two acids

A is stronger acid inspite of closeness of two electron donating methyl group to —COOH. It is once again due to the same reason that in A, -NO2 is in resonance with the ring, increases the acid strength. In B, there is steric inhibition to resonance to -NO2 group, therefore, a weaker acid.

After forming conjugate base from the above acids.
(a)

It is clear that sp hybridised carbon being most electronegative will decrease e-density from O most effectively making the conjugate base most stable.
c > b > a (acidic strength)

Example: Which is more acidic between the two:
(a) CHF3
(b) CHCl3
Solution: CHF3 > CHCl3
If we consider the -I effect of F and Cl But this effect will not be considered here After the removal of proton

(Resonance) In its resonating structure, -ve charge will be on

Example: Compare the acidic strength of the following:
(a) H2O
(b) H2S
(c) H2Se
(d) H2Te
Solution: Conjugate base has the stability order:

Example: Compare the acidic strength of the following compound:
(a)

Solution: After forming conjugate base of the above:

Example: Compare the reactivity of the following compounds with 1 mole of AgNO3:
(a)

( +ve charge is not on resonance least stable)

Example: Compare the acidic strength:
(a)

Solution: After making conjugate base

Basic strength directly depends on the availability of lone pair for H.

* Strong Acids have weak conjugate base.

Example: Which is more basic

Which is more basic NH3 or forming conjugate acid

Comparison of Basicity of Ammonia and Alkyl Amines:
Example: Compare the basic strength of the following:
NH3, CH3NH2, (CH3)2NH, (CH3)3N
Solution: Factors which affect the basicity of Amines
(1) steric effect
(2) Inductive effect
(3) solvation effect.
The base whose conjugate acid is more stable will be more acidic forming conjugate acid of the given base.

In aqueous solution, the conjugate acids form H-bonds (intermolecular) with water molecules and stabilise themselves. Conjugate acid of 1° amine which has largest no. of H-atoms form maximum H-bond with water and is most stable. Consequently 1° amine is most basic.
Due to steric effect 1° amine is considered more basic as compared to 3° amine as lone pair is hindered by three alkyl group and less available for H .

Considering the combined effect of the three (Inductive, solvation and steric effect) we can conclude that
2° > 1° > 3° > NH3

Aromatic amines are least basic as their lone pair is in conjugation and less available for protonation. 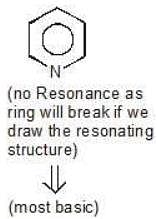 Solution:
(if L.P. will participate in Resonance, then molecule becomes aromatic)
Hence L.P. will have a greater tendency to take part in Resonance and will be less available for H+
This compound will be least basic.

Example: Compare the basic strength of the following:

Solution:
sp hybridised carbon being most electronegative will attract edensity from nitrogen and will make it less available for H+. Hence basicity decreases.
c > b > a

Example: Compare the basic strength:
(a) 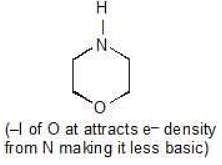 Example: Compare the basicity of the following compounds:
(a)

Solution: In part (a) the lone pair of nitrogen is in resonance therefore will be less available for H making it least basic among all followed by sp, sp2, sp3 hybridised carbon atoms.
b > c > d > a

Example: Compare the basicity of the numbered nitrogen atoms:

Solution: The planarity of ring will be destroyed if L.P. will take part in Resonance.

(In this sp2, l.p. is in Resonance with ring hence will be less available for H+ therefore it will be least basic)

Ortho effect is valid only for benzoic acid and aniline. 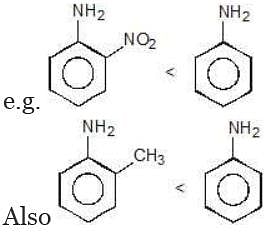 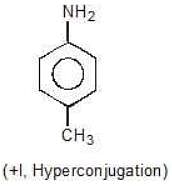 S.I.R → Steric inhibition of resonance
(a) 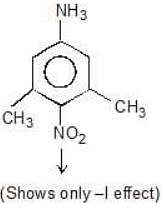 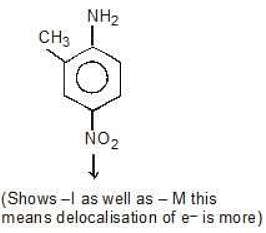 The document Acidity and Basicity - Notes - Class 11 is a part of Class 11 category.
All you need of Class 11 at this link: Class 11
Attempt Now
About this Document